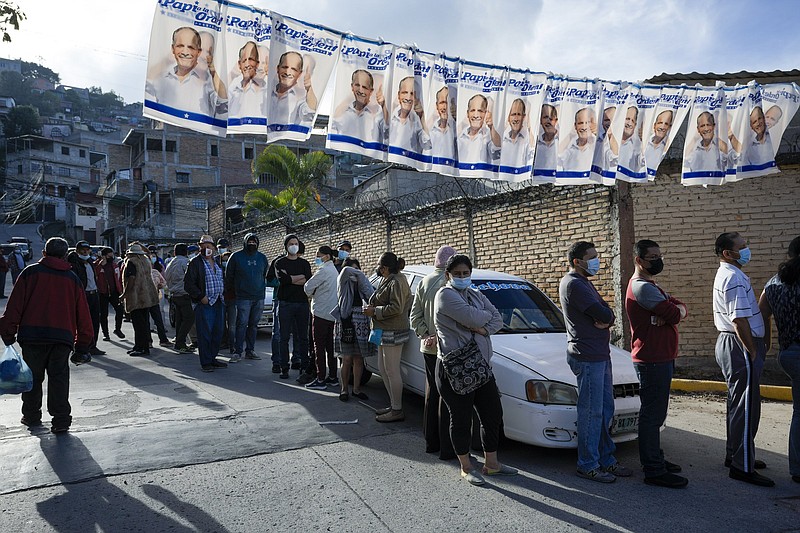 TEGUCIGALPA, Honduras -- Hondurans voted Sunday for a successor to deeply unpopular President Juan Orlando Hernandez in elections that could oust his National Party after 12 years in power.

The candidate most likely to do this is Xiomara Castro of the leftist Liberty and Re-foundation party. The former first lady is making her third bid for the presidency and is the only one of 13 opposition candidates with a chance to beat Hernandez's hand-picked successor, Nasry Asfura, a folksy Tegucigalpa mayor.

Such is the level of mistrust among Hondurans in the electoral process that many fear there could be disturbances in the streets no matter who wins.

After a protracted contest filled with irregularities in 2017, protesters filled the streets and the government imposed a curfew. Three weeks later, Hernandez was declared the winner despite the Organization of American States observation mission calling for an election redo. At least 23 people were killed.

This time, businesses along major thoroughfares in the capital are taking no chances. Workers mounted sheets of plywood over their windows Saturday.

More than 5.1 million Hondurans are registered to vote at nearly 6,000 polling sites across the country. In addition to a new president, they will choose a new congress, new representatives to the Central American Parliament and a bevy of local races.

Experts say it will come down to whether those dissatisfied with National Party rule will turn out in sufficient numbers to overcome Hernandez's potent electoral machinery.

Hondurans have reported receiving phone calls from the National Party in recent days offering an assortment of payments or other government benefits and reminding them to vote. Some calls offered to arrange transportation to polling sites.

In a world hammered by the covid-19 pandemic, Honduras can count that as just one of the crises that have ravaged it in recent years. Last year, the country also suffered the devastating effects of two major hurricanes.

Unemployment was 10.9% last year as the economy shrank 9%. Powerful street gangs continue to terrorize Hondurans, driving, along with economic factors, tens of thousands of Hondurans to emigrate.

Corruption is carried out with such impunity that Hondurans have turned their hopes to U.S. federal prosecutors in New York.

They won a life sentence for Hernandez's brother, Juan Antonio "Tony" Hernandez, for drug trafficking, and have accused the president of fueling his political rise with drug proceeds, though they have not charged him. Juan Orlando Hernandez has denied any wrongdoing.

The ground would appear favorable for Castro, but there are doubts about how much real change she would bring. Her husband, Jose Manuel Zelaya, was ousted by the military in a coup in 2009. U.S. prosecutors have tied him, too, to bribes from drug traffickers, which he also denies.

Despite the late start, voting appeared orderly. Poll workers checked IDs, scanned fingerprints and took photos of voters. Ballots were marked, deposited in clear plastic boxes -- for president, for members of congress, for local races -- and voters' pinkies were stained with ink.

Luis Guillermo Solis, Costa Rica's former president and leader of the observation mission of the Organization of American States, said late Sunday morning that preliminary reports had started arriving from their observers and things seemed normal.

"We have been in various [voting] centers already and we are seeing more or less the same, long lines of people exercising their civic right," he said.

Information for this article was contributed by Fernanda Pesce and Elmer Martinez of The Associated Press.