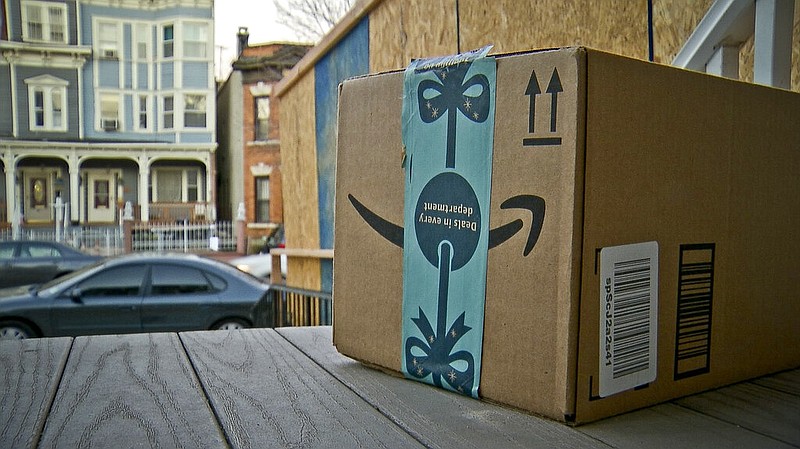 An Amazon package containing a GPS tracker is shown on the porch of a Jersey City, N.J., residence after its delivery in this Dec. 11, 2018, file photo. (AP/Robert Bumsted)

BENTONVILLE -- The return of the holiday season also means the arrival of so-called porch pirates who swoop onto a porch and steal the goods left behind by a delivery person.

Package theft is at an all-time high, with 1.7 million packages stolen or lost every day in the U.S., according to researchers at Rensselaer Polytechnic Institute in Troy, N.Y.

The state has increased punishment for thieves who swipe packages off porches. Arkansas Act 340 of 2021 makes it a Class D felony to steal a postal package from the porch or premises of a residence. The offense had been a misdemeanor.

C+R Research conducted a 2020 package theft statistics report to get insight into how Americans are affected by package thieves. For the report, 2,000 consumers who have shopped online at least once within the past 12 months were asked about their experiences with package theft.

Overall, the number of respondents who reported having a package stolen rose from 36% in 2019 to 43% in 2020. And of the 43% who have had a package stolen, almost two-thirds (64%) say they've been a victim of package theft more than once.

Nearly half (47%) filed a police report once they discovered their package had been stolen. The average value of the stolen package was $136, but 81% say they received a refund on the stolen items.

The covid-19 pandemic has altered the way many Americans shop, creating more demand for online shopping and same-day delivery. The majority (84%) report ordering more items online since the pandemic, according to the C+R report.

Derek Spicer with the Siloam Springs Police Department thinks there will be more thefts from porches this year than last year. As covid restrictions have been lifted, more people have gone back to their workplaces compared with last year and won't be home when packages are delivered, he said.

Security cameras at front doors are a good deterrent to potential thieves, who might pick another house to steal from just based on the sight of cameras, Little Rock police spokesman Mark Edwards said.

If not, the footage from the cameras is often helpful in identifying wrongdoers after the fact, Edwards said, and some companies, like Ring, can even be set up to send video footage directly to police.

North Little Rock police Sgt. Carmen Helton said the footage from these cameras is very helpful when it comes to identifying and catching package thieves. Her department frequently shares clips from this type of surveillance footage on social media to help identify suspects with community help.

If this technology isn't an option, people can fall back on the old methods of getting neighbors or friends to pick up packages so they don't sit on porches and attract thieves, Helton said.

"It's a team effort, it takes citizens doing their part as well so they don't tempt the suspects to come and take stuff," Helton said.

"We do see an increase as people are ordering more stuff online for the holidays," Murphy said. "But with the increase in home surveillance systems, it has assisted us in investigating these cases."

She was charged with 73 counts of breaking or entering, theft of property, possession of a controlled substance and possession of drug paraphernalia. She was also charged federally in connection with the theft of mail. She was sentenced in September 2019 to 10 months in prison.

Benton County Prosecuting Attorney Nathan Smith said his office does not have any record of anyone being charged under the new law.

"I supported making this a felony because stealing packages off someone's porch is more serious than a typical theft," Smith said. "It violates a person's sense of security at their residence, and it carries with it the risk of a physical confrontation between the thief and a homeowner. Hopefully, treating porch piracy as a felony will deter criminals from committing this crime in the first place."

Lt. Cody Burk of the Pulaski County sheriff's office suggested that if people know they won't be home to get their package, they could try to have it delivered to their work or another business where it can be picked up right away, he said.

Murphy recommended people schedule delivery times and keep tracking information. He said people could ship packages to their workplace or require a signature.

He suggested people let their neighbors know when they are going to be out of town and ask them to get their mail.

Murphy said people should not post on social media when they are out of town.

"Pay attention to your surroundings," he said. "If you sense something could be amiss, notify law enforcement immediately."

Edwards reminded people to lock their doors to avoid having more than just packages stolen.

Neighborhood watches should be on the lookout for strange vehicles, Edwards said, or at the very least, people should tell their neighbors when they're leaving town so they know to report suspicious activity.

Some people can be hesitant to involve neighbors in their business, but Edwards encouraged this kind of community cooperation to deter criminals.

"You have to know the people you live around," Edwards said.