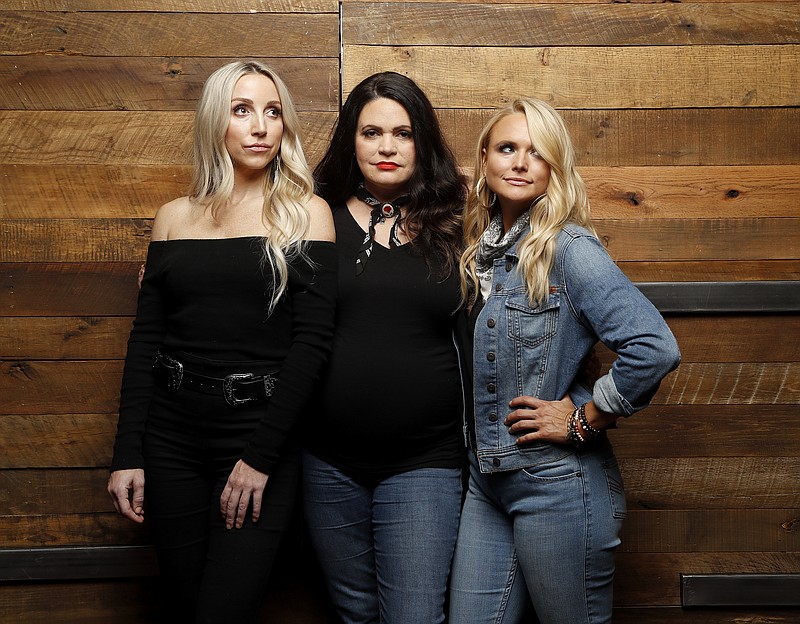 FILE - Ashley Monroe, from left, Angaleena Presley and Miranda Lambert of the Pistol Annies pose for a photo at Sony Nashville on Monday, Oct. 1, 2018 in Nashville, Tenn. The trio released a holiday album&#x201c;Hell of a Holiday.&#x201d; (Photos by Donn Jones/Invision/AP, File)

• Country star Miranda Lambert says she doesn't really like Christmas music. The only thing that got her in the spirit to do a holiday record was singing with her two best gal pals from the Pistol Annies, Ashley Monroe and Angaleena Presley. "If there was ever a time I would think a Christmas album was fun, it would be with these two girls, for sure," said the Texas-born singer. "Hell of Holiday" is an album for holiday survivors, folks like Lambert who are a little more sarcastic than sentimental, but still can find the meaning of the season through all the tinsel. The three bring both humor and harmony as they celebrate with relatives, get caught up in the hustle and sing Jesus a "Happy Birthday" song. "We are all sad-song lovers, so there's some moments on this record that have either some some dark humor or some sad-song undertones," said Lambert. They wrote the 10 original songs at Lambert's farm around the holidays last year, collaborating around bonfires. Monroe brought "Cynthia," her synthesizer, to work up the melodies. On "Snow Globe," the trio captures the magic of a white Christmas to hold onto all year long, backed by electric guitars, a saxophone solo and handclaps. On "Harlan County Coal," Presley sings about lazy husbands, shotgun shells as ornaments and scraping by to afford both presents and the light bill. "That's just like a really hardcore hillbilly Christmas song," said Presley. They also covered some Christmas classics, like Merle Haggard's "If We Make It Through December" and a tender version of "Auld Lang Syne." They'll give their first TV performance of the new music when they appear on "CMA Country Christmas" today on ABC.

• Bob Dylan, currently on tour for his 39th album, "Rough and Rowdy Ways," has been telling stories through songs for 60 years. But America's master lyricist has also captured moments in paintings that are equally intimate and a bit of a mystery. "Retrospectrum," the most comprehensive exhibit of the Nobel laureate's visual art to be held in the U.S., goes on display Tuesday in Miami at the Patricia & Phillip Frost Art Museum, kicking off along with Art Basel Miami Beach and running through April 17. The collection of 180 acrylics, watercolors, drawings and ironwork sculptures includes 40 new pieces as well as works from the 1960s, like pencil sketches Dylan made of songs such as "Highway 61 Revisited" and "Like a Rolling Stone." "He was recognized in every possible way as a writer, as a composer, as a singer, as a performer and so on. It is now that the audience sees also the last element," said Shai Baitel, who conceived the show as artistic director of the Modern Art Museum Shanghai. "Dylan is able to express himself in so many ways."