Quieting the Quakers: Notae, Umude step up for Hogs 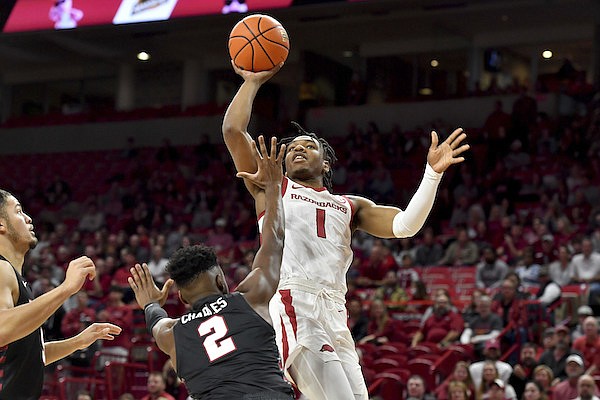 FAYETTEVILLE -- The University of Arkansas basketball team didn't have a letdown when Au'Diese Toney was ejected 55 seconds into the second half against Penn on Sunday.

Stanley Umude made sure of that.

Umude, a 6-6 senior graduate transfer from South Dakota, scored 11 of his season-high 19 points in the second half after replacing Toney to help the No. 13 Razorbacks beat the Quakers 76-60 at Walton Arena.

Toney, the most valuable player of the Hall of Fame Classic when he combined for 32 points and 18 rebounds in victories over Kansas State and Cincinnati, was ejected with 19:05 left when he pushed his hands into the face of Jonah Charles and drew a flagrant 2 foul.

Toney, who finished with 12 points and four rebounds, was the second Razorback to be ejected in the last four games. Starting guard Davonte Davis was ejected against Northern Iowa with 14:55 left for shoving a player, but Arkansas won 93-80.

"I think it was just a next man up [mentality]," Umude said. "We have a deep team.

"It was just me having to come in and fill that missing void. I didn't want to let the team down in any type of way."

Umude finished with seven rebounds in 34 minutes and had a steal and a blocked shot.

"I thought both Au'Diese and Stan played their roles," Arkansas Coach Eric Musselman said. "They didn't force the issue. Thank goodness both of them played really well."

"He's so good in that mid-range," Musselman said. "When teams zone us, he finds sweet spots."

Senior guard JD Notae led the Razorbacks (6-0) with 28 points, 9 rebounds and 5 assists. He was 0 of 6 on three-pointers, but hit 13 of 18 shots inside the arc on jumpers and drives to the basket.

"I thought he made a real conscious effort to take the ball to the cup, cut a little bit more," Musselman said. "I think that's where he's really lethal. I think sometimes he settles too much for his three-ball, and his off-the-bounce game, and his attacking of the rim is really the reason we recruited him, above all else."

"[Slajchert] torched us -- 25 points from their backup point guard," Musselman said. "Defensively, we've got some things we've got to really work on. The other kid played so efficient, I don't know how Dingle could have played any better."

Dingle started feeling ill Friday when the Quakers traveled to Fayetteville, so the coaching staff didn't have much time to game plan without him.

"He has shown some of that in spurts," Penn Coach Steve Donahue said of Slajchert's scoring "But when Jordan Dingle goes down, it was great for another kid like that to go get you that type of production in an environment like this."

The Razorbacks opened the second half on a 12-1 run -- including six points each from Connor Vanover and Umude -- to take a 49-27 lead with 15:49 left. Penn didn't pull closer than 10 points the rest of the game.

"Jaylin did a great job again of leading us in assists, although he's got to take care of the ball better," Musselman said. "Four turnovers is way too many out of that position."

Davis had 6 points, 5 assists and 5 rebounds.

Senior guard Chris Lykes, who came into the game averaging 15.2 points off the bench for the Razorbacks, went scoreless and shot 0 of 7.

"I was upset he didn't cut hard on a side out of bounds play," Musselman said. "Then when we were on defense, when you guard the inbounder, you're supposed to stagger jump and [the Razorbacks] had a little internal huddle and he came out of that -- as everyone did -- a little late, so we didn't get a stagger jump.

"So there's these little things that were bothersome more so than the 0 for 7. And you're supposed to front the post here -- meaning you get in front of the guy instead of play behind him --and he didn't do that either."

The Razorbacks outrebounded the Quakers 44-28 and outscored them 48-22 on points in the paint, but Musselman was upset about Arkansas' 15 turnovers against Penn's zone.

"Turnovers are a huge problem, a huge issue," he said. "Not happy at all. Penn is not a team that turns people over."

"Taking care of the basketball, we have to get a lot better at," Musselman said. "Wish we could practice right now, but we can't."

Umude scored 1,520 points in four years at South Dakota and averaged 21.6 points last season, but he hadn't scored more than 10 points as a Razorback until Sunday.

"I still think there's a lot we have to work on, including myself," Umude said. "I'm just still trying to get comfortable with the offense and figure out where I'm going to be most effective."