Remember when, Arkansas? Vandals gave Pigs on Safari statues a hard time in 2002 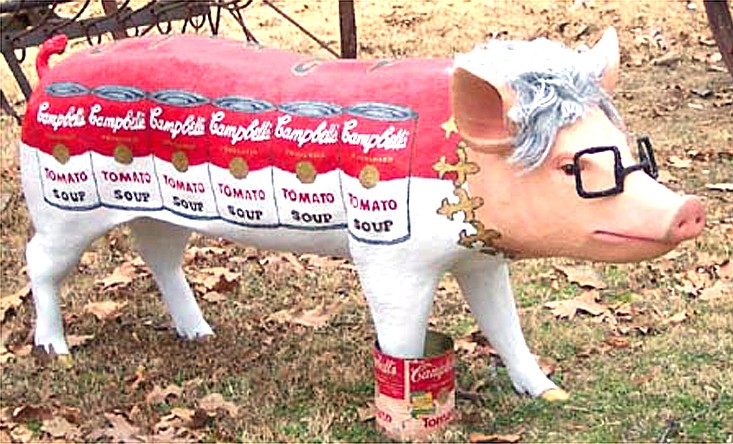 Does anyone recognize what's happening in this photo from the archives of the Arkansas Democrat-Gazette?

In 2002, the Junior League of Little Rock planned a community-wide fundraiser to mark its eighth decade of service. The idea was to get artists and organizations to decorate 80 large Fiberglas pig statues, display them outdoors around town for a year and then auction them to benefit the Little Rock Zoo.

This was Pigs on Safari.

The first 20 pigs appeared in March and April 2002, and almost immediately, things happened to them.

"Sue E. Safari" was pig-napped from her trailer in front of a west Little Rock office building, but tenants found her inside, unharmed.

"Superpig," painted in blue and red, had his heel broken while protecting peace and justice in the River Market District. Someone stole "Bob the Builder's" hard hat twice near Markham and Main streets. "The Master Golfer" at the Little Rock Regional Chamber of Commerce building lost his leather golf bag.

A paintbrush displayed with "Pablo Pigcasso" at President Clinton Avenue and LaHarpe Boulevard vanished; then someone took his white painter's cap. And vandals smashed the curly white tail off "Pork-a-dot."

Things had calmed considerably by September, when Bob Pearcy let his 2-year-old daughter Isabella pretend to ride the chamber pig.

But then, vandals dented Pigcasso's paint can. Worse, as the Democrat-Gazette reported, "Pablo was jumped. He was punched, kicked and left on his side on the cold concrete." His eyes were gouged, and illegible graffiti desecrated his piggy privates.

In November, vandals ripped "Hamri Pigtisse" off his concrete perch and tossed him into the intersection of Cantrell Road and University Avenue. Cars took his ears and tail. The tuxedo-clad "Swine and Flowers" disappeared from Tipton & Hurst at Cantrell Road and North Grant Street.

"Pig in the Park," done up in a mosaic of tiles and pottery shards by Forest Park Elementary School pupils, was stripped naked and battered at Prospect Terrace Park. That's when the league moved all the pigs into protected spots. 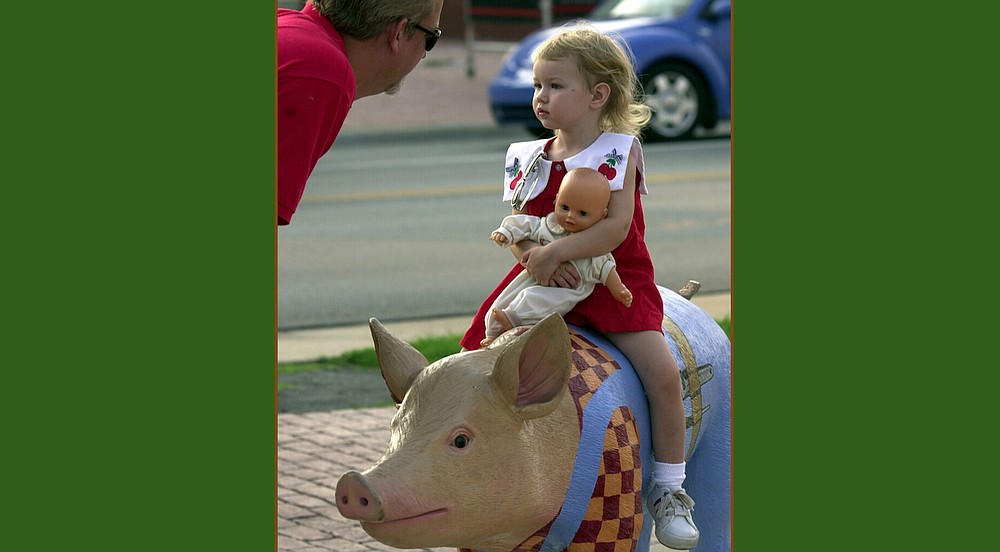 Bob Pearcy talks to his daughter Isabella, while the 2-year-old pretends to ride the Junior League of Little Rock’s Pig on Safari outside the Little Rock Regional Chamber of Commerce on Sept. 5, 2002. (Democrat-Gazette file photo)