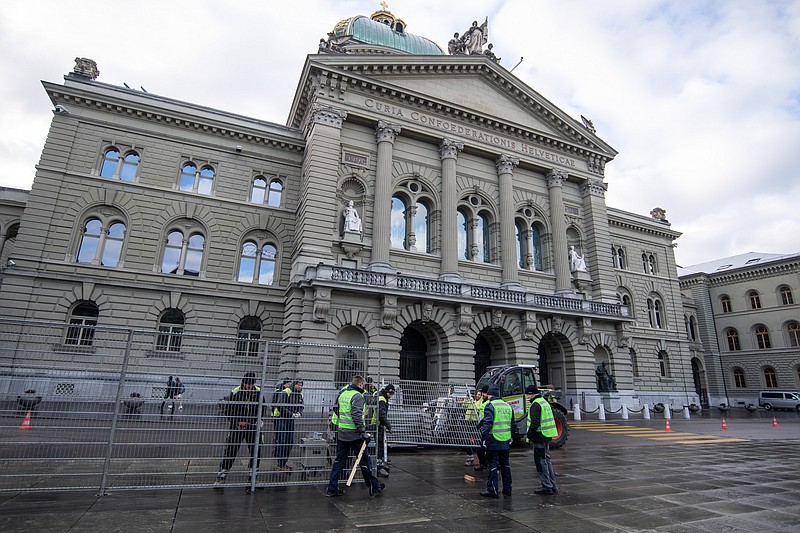 Police officers and logistics personnel set up a protective fence around the Bundesplatz, Government Plaza, in Bern, Switzerland, Sunday, Nov. 28 2021. Swiss voters are having their say in a referendum Sunday on legislation which imposed the use of a special COVID-19 certificate that lets only people who have been vaccinated, recovered, or tested negative attend public events and gatherings. (Peter Schneider/Keystone via AP)

BERLIN -- Swiss voters gave clear backing Sunday to legislation that introduced a system with special covid-19 certificates under which only people who have been vaccinated, recovered or tested negative can attend public events and gatherings.

Final results showed 62% of voters supporting the legislation, which is already in force. The referendum offered a rare bellwether of public opinion on the issue of government policy to fight the spread of coronavirus in Europe, which is currently the global epicenter of the pandemic.

The vote on the country's "covid-19 law," which also has unlocked billions of Swiss dollars in aid for workers and businesses hit by the pandemic, came as Switzerland -- like many other nations in Europe -- faces a steep rise in coronavirus cases.

The Swiss federal government, unlike others, hasn't responded with new restrictions. Analysts said it didn't want to stir up more opposition to its anti-covid-19 policies before they faced Sunday's test at the ballot box -- but that if Swiss voters gave a thumbs-up, the government may well ratchet up its anti-covid efforts.

Health Minister Alain Berset said, with the result, authorities "still have the necessary instruments to manage the crisis, and we can, if necessary, adjust the instruments to developments."

Of the country's 26 states, only two -- Schwyz and Appenzell Innerrhoden, both conservative rural regions in eastern Switzerland -- voted against the legislation.

"A decision has been made and we must come together now to get through this winter as well as possible," Berset said. "This is an appeal for unity but also for respect for decisions that have been taken."

Swiss health authorities warned Tuesday of a rising "fifth wave" on infections in the rich Alpine country, where vaccination rates are roughly in line with those in hard-hit neighbors Austria and Germany at about two-thirds of the population. Infection rates have soared in recent weeks.

The seven-day average case count in Switzerland shot up to more than 5,200 per day from mid-October to mid-November, a more than five-fold increase.

Meanwhile, the Netherlands has seen a string of record daily infections in recent weeks and an earlier partial lockdown appears to have had little effect. Dutch hospitals have warned that intensive care units could become overwhelmed by the end of the week.

The Dutch government has mandated that all nonessential surgeries, such as hip replacements, be postponed to free up ICU beds for covid-19 patients.

The Netherlands moved into a tougher lockdown Sunday that was announced amid spiking infections even before the country recorded its first confirmed cases of the new, more highly transmissible omicron virus variant.

Bars, restaurants, nonessential stores, cinemas and theaters were among the public places forced to shut from 5 p.m. until 5 a.m. under the new lockdown.

The restrictions took effect hours after Health Minister Hugo de Jonge announced that at least 13 travelers who arrived at Amsterdam's Schiphol Airport on Friday tested positive for the new variant. He urged other travelers who arrived last week from southern Africa to get tested as well.

"We have appealed to everyone ... who has been in southern Africa in the past week to report to the local health authority ... to make a separate test appointment," he said.

De Jonge said he could not rule out imposing more restrictions leading up to Christmas.

The Czech government declared a 30-day state of emergency and imposed additional coronavirus restrictions Friday in its effort to tackle the surge. Among them, all Christmas markets across the country were banned and bars, restaurants, nightclubs, discotheques and casinos have to close at 10 p.m.

The number of people at cultural and sports events in the Czech Republic is now limited to 1,000 who are vaccinated or have recovered from covid-19 while all other public gatherings can be attended by only up to 100 visitors, down from 1,000.

Thousands rallied Sunday in the Czech capital of Prague to protest the government's restrictive measures to tackle a record surge of coronavirus infections.

It was their third protest in the last two weeks. The participants didn't wear face coverings or follow social distancing rules and drank beer despite a ban on drinking alcohol in public.

The Czech Republic has been setting repeated records in new daily infections, hitting a record high Thursday of almost 28,000 cases. The infection rate was at 1,191 new cases per 100,000 residents over the past seven days.

Overall, the nation of 10.7 million has registered over 2.1 million cases with 32,837 covid-related deaths. It has lower vaccination rates than many other EU nations.

The number of people at cultural and sports events in the Czech Republic is now limited to 1,000 who are vaccinated or have recovered from covid-19 while all other public gatherings can be attended by only up to 100 visitors, down from 1,000.

Information for this article was contributed by Mike Corder and Karel Janicek of The Associated Press. 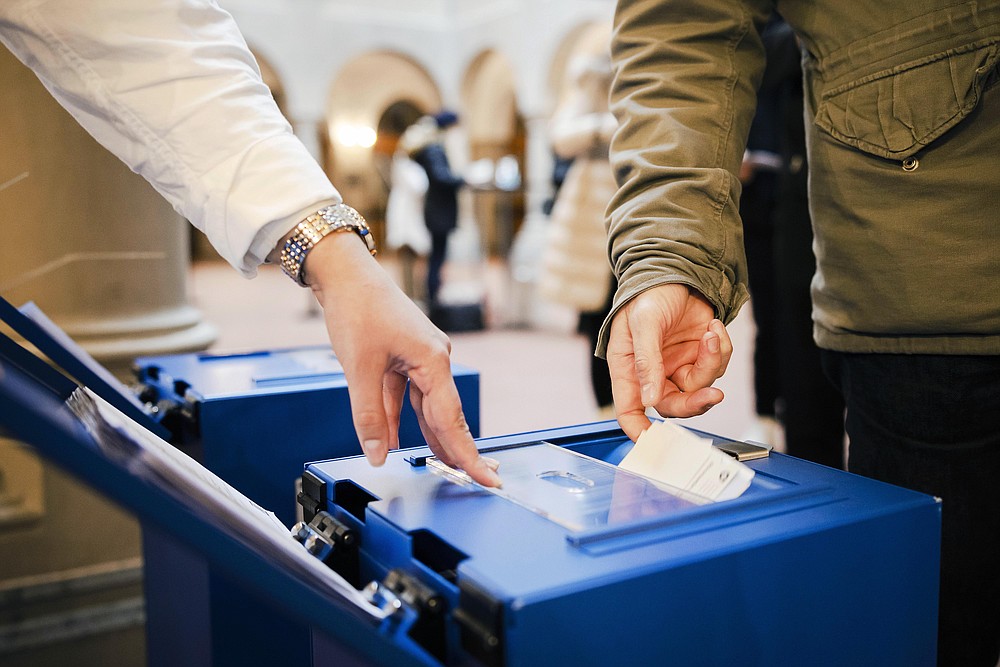 Voters cast their ballots at a polling station, for three national bills, including the COVID-19 law, and several cantonal and communal proposals, at the Zurich City Hall in Zurich, Switzerland, Sunday, Nov. 28, 2021. Swiss voters appear set to approve by a clear margin legislation which introduced a special COVID-19 certificate that lets only people who have been vaccinated, recovered or tested negative attend public events and gatherings. (Michael Buholzer/Keystonve via AP)