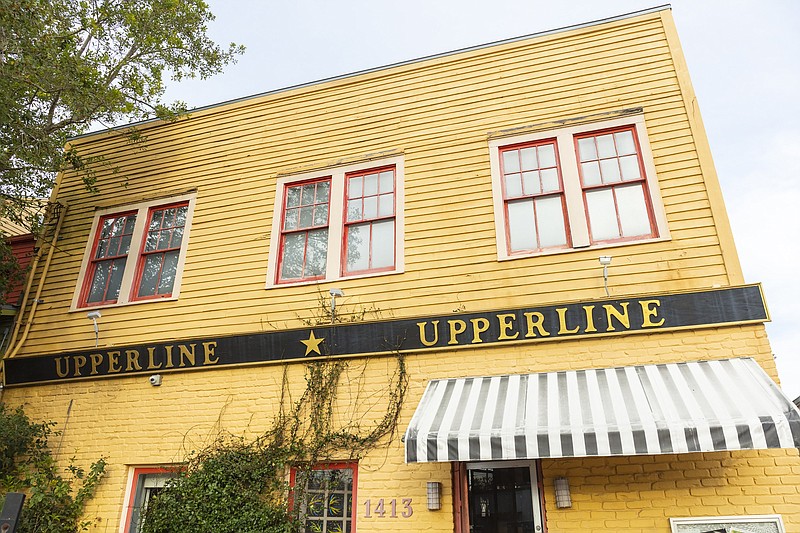 Upperline in New Orleans is officially for sale and, with the retirement of its founder, who embraced her hostess role as a higher calling, it marks the end of an era for an establishment whose charisma reflected its owner’s. (The New York Times/Cedric Angeles)

NEW ORLEANS — JoAnn Clevenger was certain she would reopen Upperline, her New Orleans Creole restaurant, for most of the 18 months since the covid-19 pandemic forced its closing. That confidence began cracking this past summer, as she began, with the help of a therapist, to confront her fear of losing a business she regarded as her "platform" for 38 years.

"I was paralyzed not knowing what I was going to do with the rest of my life," said Clevenger, who is 82.

This month, she announced that whatever her future holds, it will not include Upperline. While the restaurant is officially for sale, the retirement of its founder, who embraced her hostess role as a higher calling, marks the end of an era for an establishment whose charisma reflected its owner's.

"I found JoAnn to be an intoxicating character," said Gabriel Stafford, 39, who worked at Upperline for 11 years. "I felt like I was ensconced in New Orleans-ness while working there."

The restaurant was also one of a dwindling number championing a strain of urban-rural cuisine that helped make New Orleans an internationally respected culinary destination.

While Clevenger came up with dishes for Upperline's traditional menu, including the fried green tomatoes topped

with shrimp remoulade that became a New Orleans staple, she was never the chef. The three dining rooms were her domain. Each doubled as a gallery for artwork, most by New Orleans artists. She started acquiring the collection in 1960, when she had a tiny, short-lived gallery in the French Quarter.

"I did not sell one picture in three months, so I had to give it up," she said. 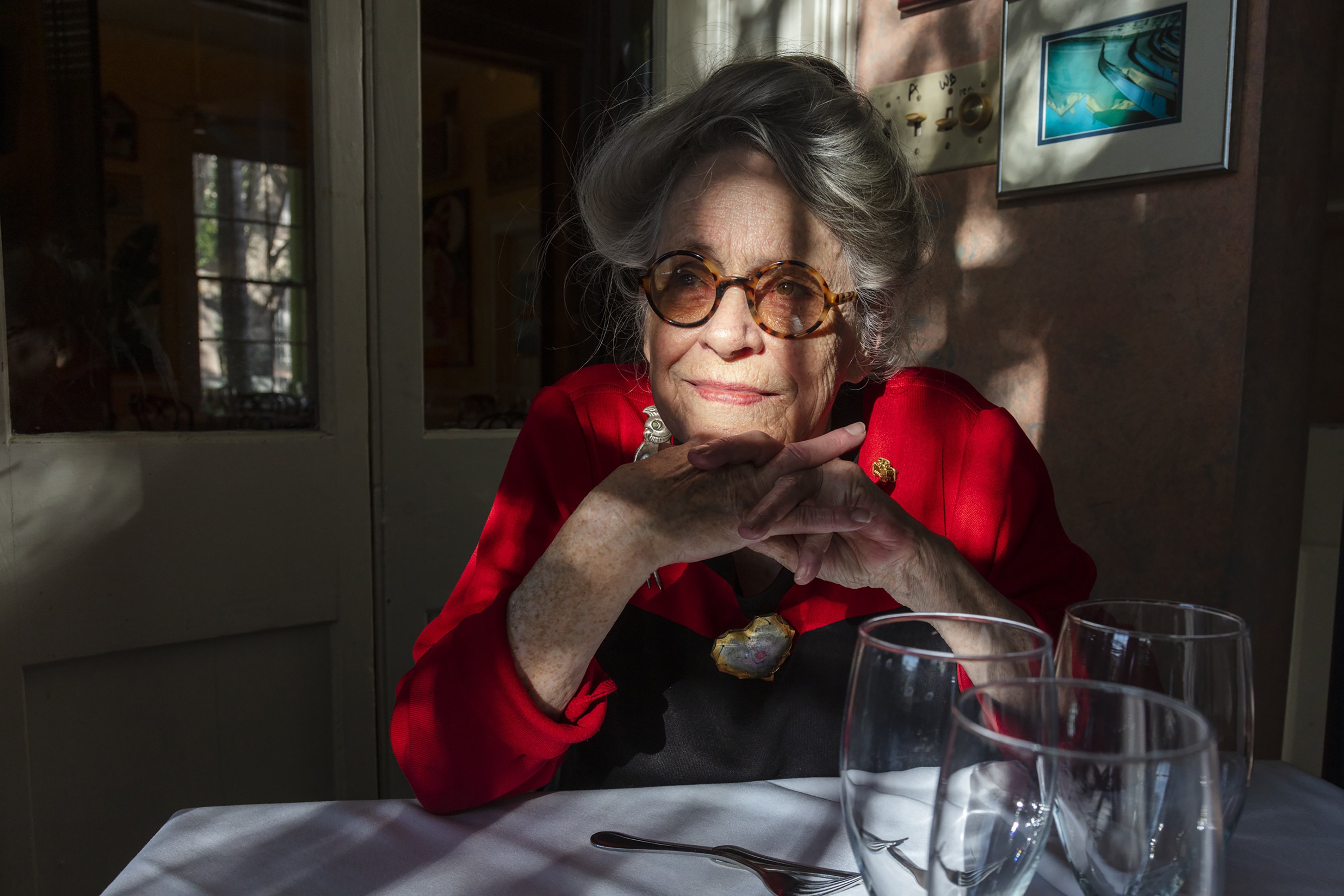 Deciding to close Upperline did not happen easily for JoAnn Clevenger. “I was paralyzed not knowing what I was going to do with the rest of my life.” (The New York Times/Cedric Angeles)
IN GOOD HANDS

Clevenger is co-owner with her son, Jason Clevenger, who was the chef when Upperline opened in 1983, and her husband, Alan Greenacre. They plan to sell the building and are open to selling the business, but only if JoAnn Clevenger trusts that the buyer "will carry on what we built." The art is also for sale.

On a recent tour of Upperline, Clevenger paused beneath the portrait in the front dining room of a domestic worker with a scarf wrapped around her head, painted by Jean Flanigen.

"Look at how beautiful she is," Clevenger said of the portrait. "It demands respect."

Upperline's rear dining rooms were filled with late-afternoon light when Clevenger walked into them. She stopped to pose next to a Noel Rockmore portrait of Sister Gertrude Morgan, a preacher whose artwork was critically praised before her death in New Orleans in 1980. Rockmore, a revered New Orleans artist of his era, was a fixture in the French Quarter bohemian milieu that enchanted Clevenger when she was a young woman working in the neighborhood's bars and restaurants.

"I knew Rockmore but was afraid of him," she said. "He was an intense womanizer. He drank a lot."

Another Rockmore portrait features piano player Frank Moliere, who was known as Little Daddy; musicians were frequently featured in the artist's work. It reminded Clevenger of the night Robert Plant, lead singer of Led Zeppelin, dined at Upperline.

"I'm not very up on popular music," she said. "I didn't know he was a really big deal." 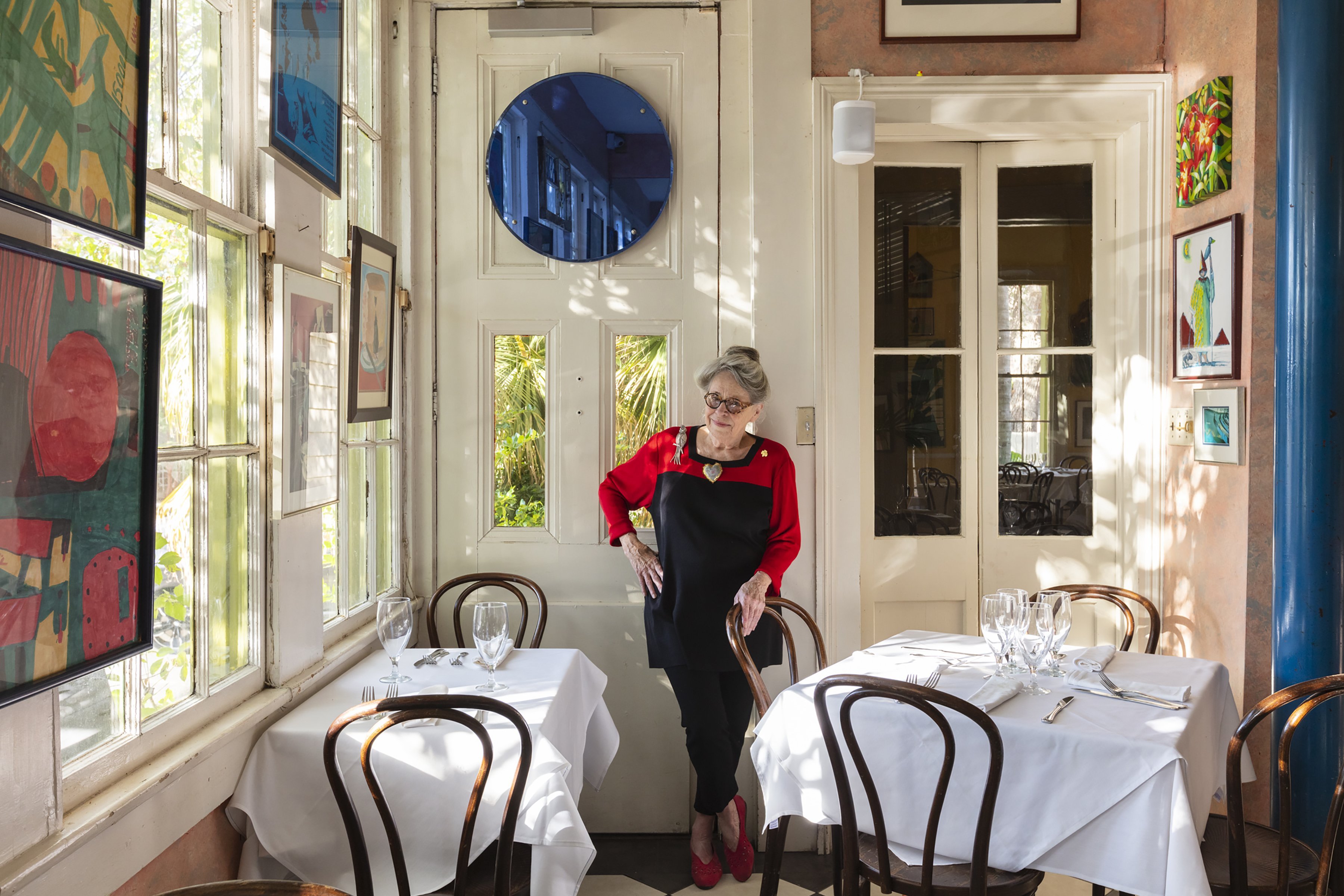 This is how it went with Clevenger all afternoon. Artwork triggered memories from her French Quarter days as a precocious 20-something from north Louisiana, and those memories connected to the more recent history of Upperline. She was recalling Typpa Hanush, a "quite spectacular woman" who sold turtle liver pate in the French Market and occasionally baby-sat Clevenger's children, when suddenly, noticing the table in front her, she changed subjects.

"This is where Jeff Bezos sat," she said. She told of the night Bezos, Amazon founder and owner of The Washington Post, sat at a table next to relatives of Dean Baquet, executive editor of The New York Times and a New Orleans native.

"I gave them each a little note, telling them who was at the other table," she said. "It's about connections."

She also gave a printed list of local bookstores she recommends to MacKenzie Scott, who was then Bezos' wife.

"It felt really good that I could give them a list of these brick-and-mortar stores he's on the way to destroying." 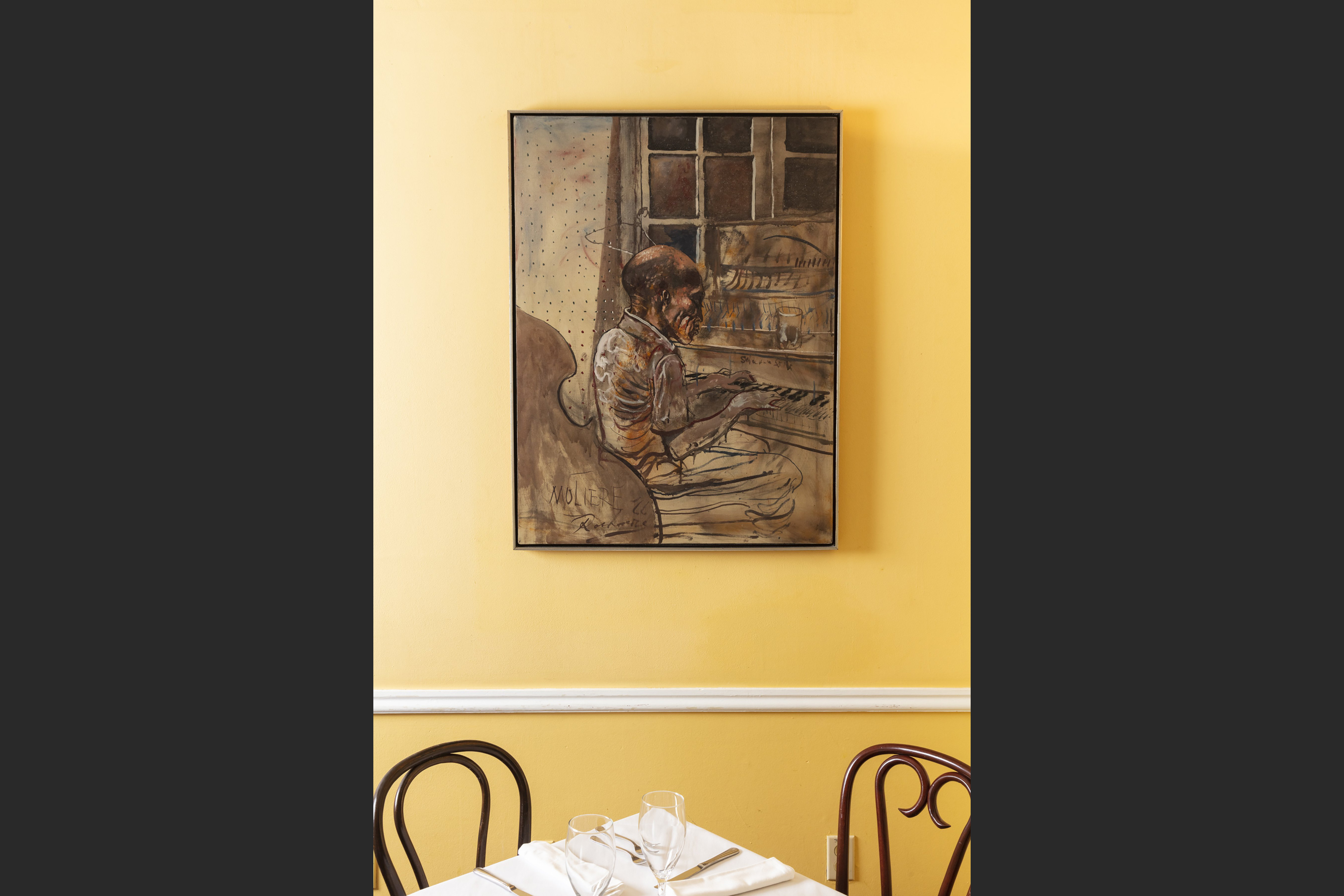 A painting by the late French Quarter artist Noel Rockmore of piano player Frank “Little Daddy” Moliere hangs in Upperline in New Orleans. (The New York Times/Cedric Angeles)
A STROLL TO THE PAST

Clevenger was performing — as cultural ambassador, light gossip, amateur historian — in much the same way she did when Upperline was in full flower.

"She knew how to tie together great ingredients, both in her dishes and her dining room," said Walter Isaacson, author, Tulane University professor and New Orleans native.

She turned back to the front of the restaurant, passing a Joseph Ayers portrait of Ken Smith, the restaurant's longest-serving chef, who left to become a Roman Catholic priest in 2010. She stopped in the center dining room, with its checkerboard floor. A photo portrait of Jason Clevenger's successor as chef, Tom Cowman, hangs in the center of a window.

"Tom was really into books and art," JoAnn Clevenger said. "He taught me so much."

Back in the restaurant's front room, she picked up a framed copy of the menu from the night Upperline reopened after Hurricane Katrina in 2005. Isaacson said eating at the restaurant in the days after the storm was "where we regained our faith that the city would rebound."

Clevenger said the gratitude she felt from customers in those unsettling times was one reason she kept Upperline open as long as she did.

"My family has been bugging me to retire for at least 10 years," she said.

She explained what attracted her to hospitality when she worked on Bourbon Street in the 1960s and '70s.

"I remembered things about the customers and the bartenders and the other people that worked on the street," she said. "And they loved that, and that made me feel good that I made them feel good. It's a benevolent circle." 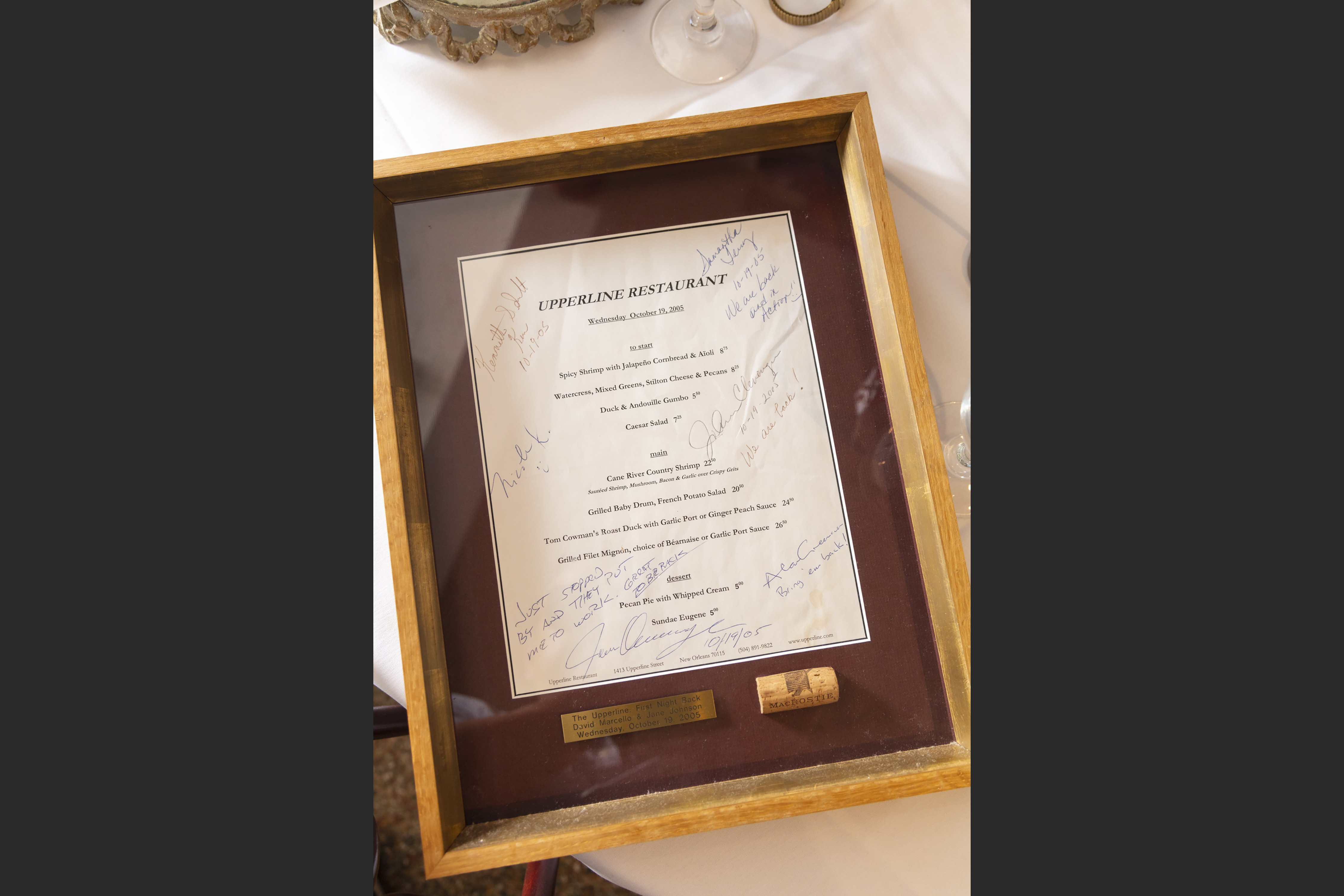 A framed menu from 2005 recalls when the restaurant reopened after Hurricane Katrina. (The New York Times/Cedric Angeles)
BEFORE IT GOES AWAY

A few minutes later, she was back in those days herself, as she supplied a narrative to a picture of Bourbon House, the French Quarter bar where she met Tennessee Williams.

"His cousin introduced us," she said. "Her name was Stella."

"Take a look at the pretty sky, JoAnn," said her husband, who had wandered unnoticed into the restaurant.

Clevenger went to the window, laughed at the beauty of the fading light, and opened the shutters wide to pose for one last photo.

"Let's capture it before it goes away," she said.