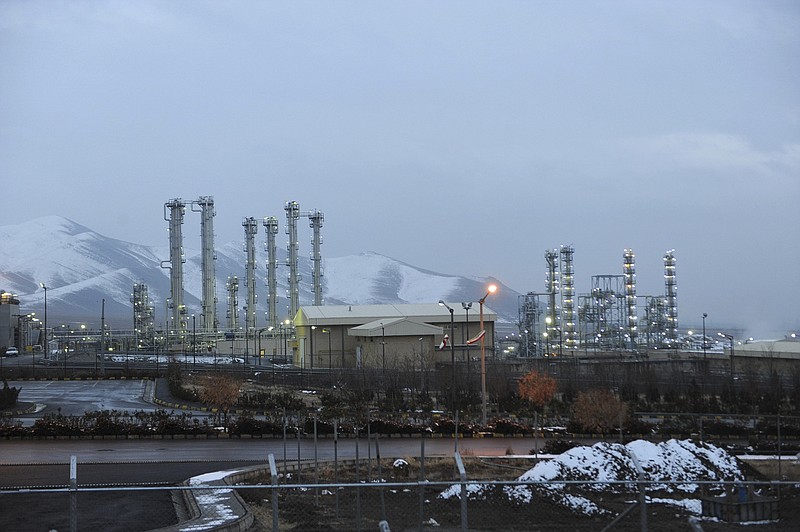 FILE - The Arak heavy water nuclear facilities, near the central city of Arak, 150 miles (250 kilometers) southwest of the capital Tehran, Iran, Jan. 15, 2011. On Monday, Nov. 29, 2021, negotiators are gathering in Vienna to resume efforts to revive Iran's 2015 nuclear deal with world powers, with hopes of quick progress muted after the arrival of a hard-line new government in Tehran led to a more than five-month hiatus. (AP Photo/ISNA, Hamid Foroutan, File)

VIENNA -- Negotiators in Vienna resumed talks Monday over reviving Iran's 2015 nuclear deal with world powers, with the United States taking part at arm's length as in previous rounds since the Trump administration pulled out of the accord three years ago.

Success could lift sanctions from Iran's economy and have major repercussions for oil markets and Middle East security. But there remains a long way to go with U.S. officials increasingly pessimistic over their chances of striking an accord with Iran's new hard-line government.

[Video not showing up above? Click here to watch » arkansasonline.com/1130deal/]

Hopes of quick progress were muted after a more than five-month hiatus in negotiations. But the European Union official chairing the talks sounded an upbeat note after the first meeting concluded.

"I feel positive that we can be doing important things for the next weeks," EU diplomat Enrique Mora told reporters.

All participants showed a willingness to listen to the positions and "sensibilities" of the new Iranian delegation, Mora said. At the same time, Tehran's team made clear it wanted to engage in "serious work" to bring the accord back to life, he said.

The remaining signatories to the nuclear deal formally known as the Joint Comprehensive Plan of Action -- Iran, Russia, China, France, Germany and Britain -- convened at the Palais Coburg, a luxury hotel where the agreement was signed six years ago.

A U.S. delegation headed by the Biden administration's special envoy for Iran, Robert Malley, stayed at a nearby hotel where it was being briefed on the talks by diplomats from the other countries.

President Joe Biden has signaled he wants to rejoin the talks. The last round, aimed at bringing Iran back into compliance with the agreement and paving the way for the U.S. to rejoin, was held in June.

White House press secretary Jen Psaki said the U.S. continues to seek a "mutual return to full compliance," though American officials have repeatedly said Iran should drop expectations that the Biden administration would make a commitment that a future president couldn't decide to quit the deal again.

U.S. officials have also stressed deep concerns over the extent to which advances in Iran's nuclear knowledge can be effectively unwound.

Nevertheless, "There is a sense of urgency in putting an end to the suffering of the Iranian people," said Mora, referring to the crippling sanctions the U.S. reimposed on Iran when it quit the accord.

"And there is a sense of urgency in putting the Iranian nuclear program under the transparent monitoring of the international community," he said.

"What has been the norm over the first six rounds will be again the practice in this seventh round," Mora said. "Nothing new on working methods."

The United States left the deal under then-President Donald Trump's "maximum pressure" campaign against Tehran in 2018. That triggered a security crisis in the Persian Gulf and beyond, raising tensions between Iran and its two main regional rivals, Israel and Saudi Arabia.

The deal saw Iran limit its enrichment of uranium in exchange for the lifting of economic sanctions. Since the deal's collapse, Iran now enriches small amounts of uranium up to 60% purity -- a short step from weapons-grade levels of 90%. Iran also spins advanced centrifuges barred by the accord, and its uranium stockpile now far exceeds the accord's limits.

Iran maintains that its atomic program is peaceful. However, U.S. intelligence agencies and international inspectors say Iran had an organized nuclear weapons program up until 2003. Nonproliferation experts fear the brinkmanship could push Tehran toward even more extreme measures to try to force the West to lift sanctions.

Russia's top representative, Mikhail Ulyanov, said he held "useful" informal consultations with officials from Iran and China on Sunday. He said the meeting was aimed at "better understanding ... the updated negotiating position of Tehran."

A delegation appointed by new Iranian President Ebrahim Raisi is joining the negotiations for the first time. Iran has made maximalist demands, including calls for the U.S. to unfreeze $10 billion in assets as an initial goodwill gesture, a tough line that might be an opening gambit.

Ali Bagheri, an Iranian negotiator, told Iranian state television late Sunday that the Islamic republic "has entered the talks with serious willpower and strong preparation." However, he cautioned that "we cannot anticipate a time frame on the length of these talks now."

Iranian Foreign Ministry spokesman Saeed Khatibzadeh, meanwhile, suggested Monday that the U.S. could "receive a ticket for returning to the room" of the talks if it agrees to "the real lifting of sanctions." He also criticized a recent opinion piece written by the foreign ministers of Britain and Israel, who pledged to "work night and day to prevent the Iranian regime from ever becoming a nuclear power."

ISRAELI: DON'T GIVE IN

Israeli Prime Minister Naftali Bennett, in a video address delivered to the nations negotiating in Vienna, warned that he saw Iran trying to "end sanctions in exchange for almost nothing."

"Iran deserves no rewards, no bargain deals and no sanctions relief in return for their brutality," Bennett said in the video that he later posted to Twitter. "I call upon our allies around the world: Do not give in to Iran's nuclear blackmail."

Israel accused Iran of "playing for time" in comments by Minister of Foreign Affairs Yair Lapid as he visited London on Monday.

British Foreign Secretary Liz Truss called the Vienna talks "the last opportunity for the Iranians to come to the table" after meeting with Lapid.

"We want those talks to work," Truss said. "But if they don't work, all options are on the table."

In an interview with NPR broadcast Friday, U.S. negotiator Malley said signs from Iran "are not particularly encouraging."

Russia's Ulyanov said there's pressure to get the process moving after "a very protracted pause."

"The talks can't last forever," he tweeted Sunday. "There is the obvious need to speed up the process."

Mora, the EU official, said participants in Monday's meeting agreed on an agenda for the coming days. Diplomats planned to discuss the issue of sanctions today, followed by a session on Iran's nuclear commitments Wednesday.

The Islamic Republic's lead negotiator, Ali Bagheri Kani, described the decision to move immediately to sanctions removal as "a significant achievement," adding that he was "optimistic" after the first day. He was accompanied by a delegation of some 40 people, the semiofficial Khorrasan newspaper reported Sunday, including midranking officials from the oil ministry and central bank.

Iran has said the discussions must secure full, guaranteed and verifiable removal of U.S. sanctions -- including on its critical oil exports -- and a commitment that Washington would never seek to leave a restored pact.

In Saudi Arabia, a senior official said all members of the six-nation Gulf Cooperation Council were following the talks closely. While they supported restoring the nuclear deal as a first step, larger issues of regional security and stability, including Iran's missile program, should also be addressed, the official said.

Information for this article was contributed by Kiyoko Metzler, Nasser Karimi, Jill Lawless, Frank Jordans and Geir Moulson of The Associated Press; and by Patrick Sykes, Yasna Haghdoost and Jonathan Tirone of Bloomberg News (TNS). 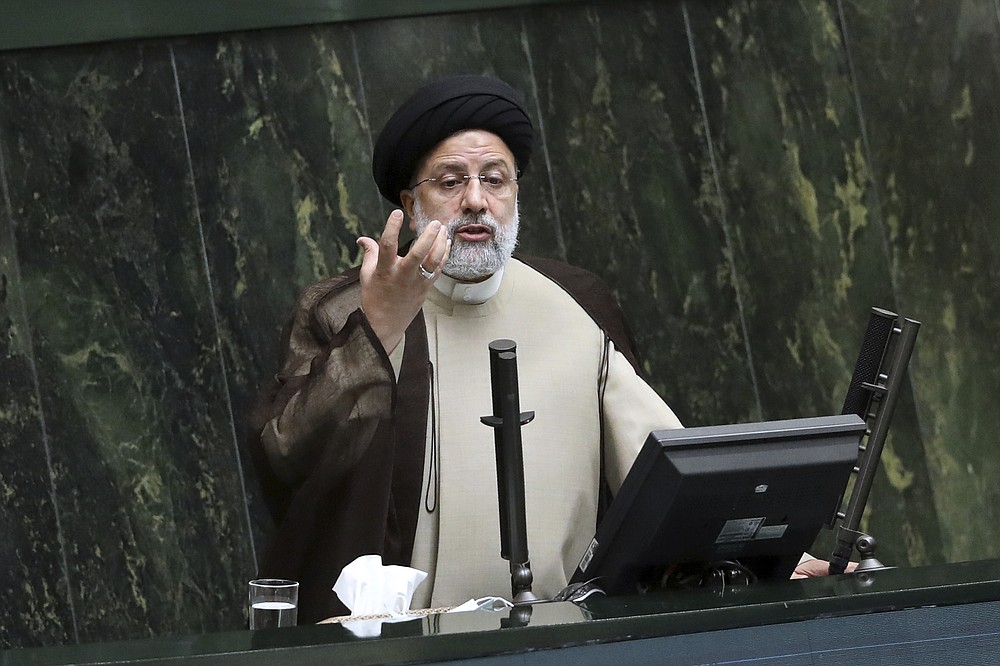 FILE - Iranian President Ebrahim Raisi addresses the parliament during a vote of confidence session for the education minister, in Tehran, Iran, Tuesday, Nov. 16, 2021. Iran and world powers resume talks in Vienna this week of Nov. 28, aimed at restoring the nuclear deal that crumbled after the U.S. pulled out three years ago. There are major doubts over whether the deal can be reinstated after years of mounting distrust.(AP Photo/Vahid Salemi)