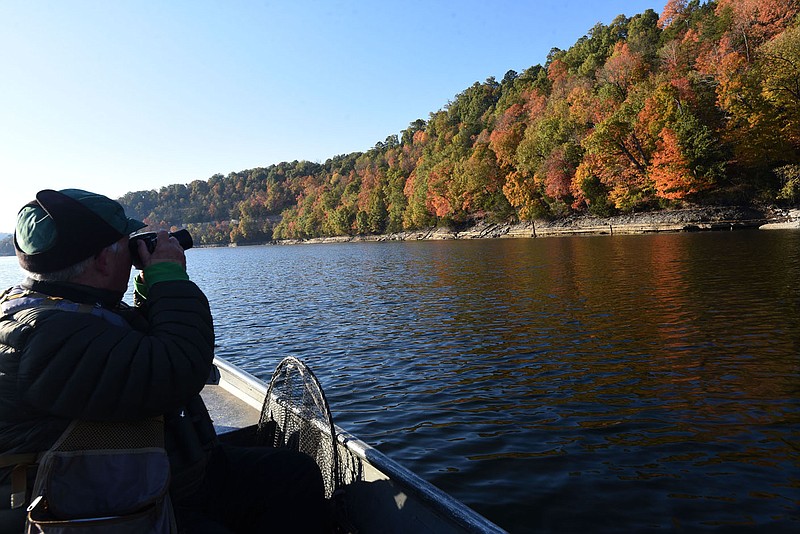 Joe Neal of Fayetteville admires autumn color on Nov. 5 2021 while looking for birds at Beaver Lake. All kinds of waterfowl, raptors and songbirds are seen at the lake during fall as birds migrate. (NWA Democrat-Gazette/Flip Putthoff)

When the weather turns cold, dedicated bird watchers bundle up in coats, gloves and life jackets to see a feathered show that happens each autumn at Beaver Lake.

Fall migration sees all manner of birds on the wing and on the water at the 31,000-acre reservoir from late August into December. Early migrants, such as blue-winged teal, strafe the lake surface flying fast and low. Mallards, American wigeons and other ducks follow, said Joe Neal of Fayetteville, who has written several books and hundreds of articles about birds. He guides field trips for the Northwest Arkansas Audubon Society.

"Then when that first big cold front comes in October, when you close up the windows and turn on the heat, that's when we see the first loons and big flocks of geese flying high overhead," Neal added. "As it gets colder you get more of the northern birds."

Neal and Vivek Govind Kumar tallied a long list of bird species seen during a boat trip on Nov. 5 in the Rocky Branch area of Beaver Lake. Not a ripple disturbed the flat, smooth water on the sunny, mild fall morning. Lakeside bluffs were on fire with autumn color.

A bluff one-half mile east of Rocky Branch park is a fall favorite for Neal. Scores of maple trees show off along the limestone cliff to make it one of the most beautiful on the lake.

With such spectacular sights, Neal nearly forgot birds were the focus of this expedition.

The two, along with their boat driver, made a slow, two-hour circle north of the park and around 100-acre Shaddox Island. The area is the widest part of Beaver Lake. It's 2 miles from the south shoreline at Rocky Branch park to the north shore.

Reflections of birds on the watery mirror were dazzling. Large and small flocks of grebes -- small duck-like birds -- were scattered hither and yon.

Most were horned grebes. Neal noted that Beaver Lake could be called Horned Grebe Capital of Arkansas. Bird counts have revealed more horned grebes on Beaver Lake, mainly on this widest part of the reservoir, than on any lake in Arkansas.

Govind Kumar counted 314 horned grebes in a flock northwest of Rocky Branch park. "We've counted as high as 500 in the spring, but 314 is a high number for this time of year," Neal said.

Why so many horned grebes in this spot?

The water is shallow to only moderately deep, Neal explained. There is evidently a good population of their preferred foods such as crawdads, insects, spiders and fish.

Both birders had high hopes of spotting loons, but Beaver held up its reputation of Lake No Loons, as Neal calls it. Loons are seen on Beaver Lake, but not in high numbers. Lake Tenkiller in northeast Oklahoma may be the region's loon capital. Neal sees plenty when he goes birding there.

[Video not showing up above? Click here to watch » arkansasonline.com/1130bird/]

"There are certain puddle ducks that can't take any freezing weather at all," Neal said. 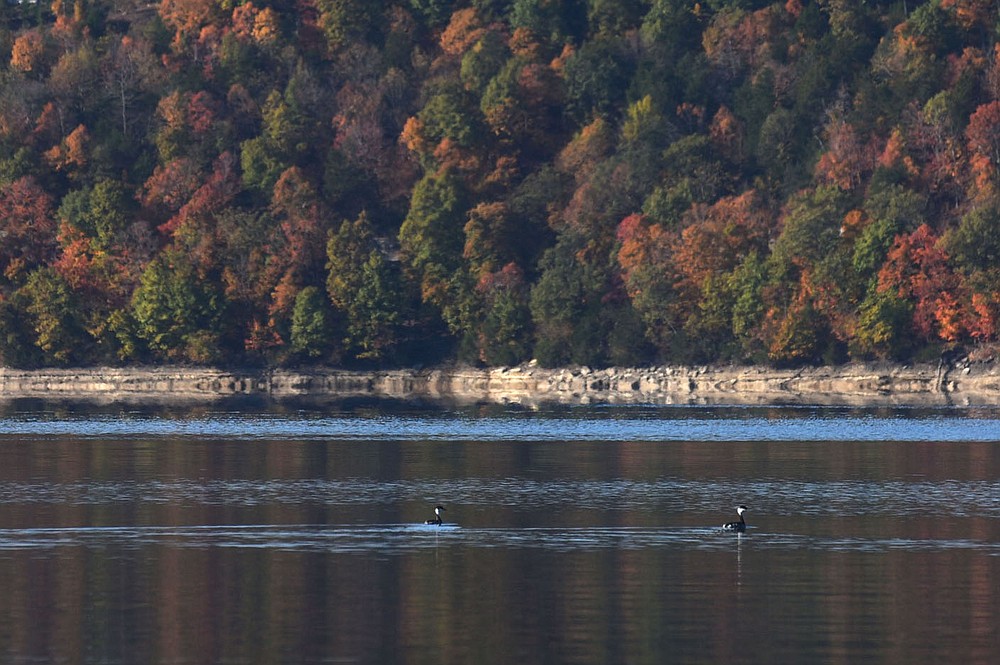 Among the birds Joe Neal jotted down on his list were pied-billed grebes, eared grebe (one), mallards, wood ducks, bald eagles (two adults, one sub-adult) and a sharp-shinned hawk.