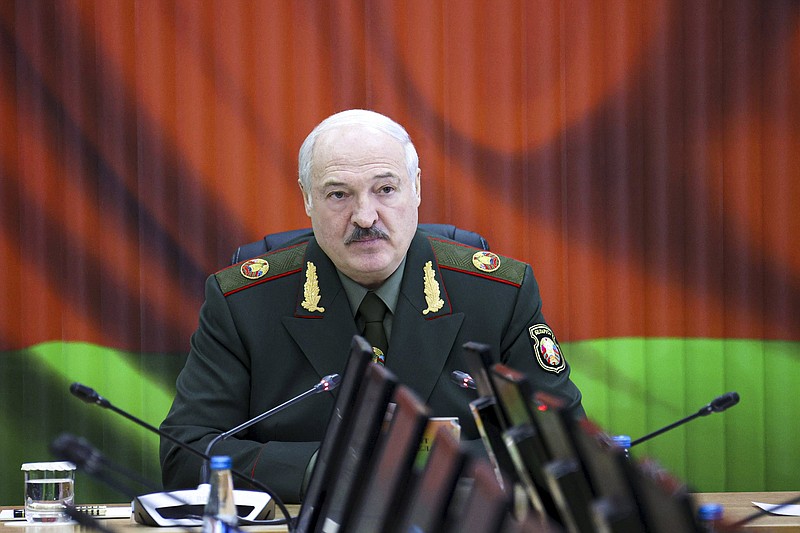 MOSCOW -- Belarusian President Alexander Lukashenko on Monday accused Lithuanian authorities of dumping the bodies of migrants on the border between the two countries -- a claim rejected by Lithuania amid soaring border tensions between Belarus and its European Union neighbors.

Lukashenko also warned that his country will stand squarely behind its ally Russia if the Ukrainian authorities launch an offensive against Moscow-backed rebels in eastern Ukraine. He tried to cast the tensions over migrants as part of a purported Western plot against Belarus and Russia.

Lukashenko said at a meeting with his top military brass that Belarusian guards found the bodies of two migrants left on the border over the weekend.

"They put a dead body, or, probably, a person who is still alive, in a sleeping bag and toss it on the border," Lukashenko said. "What an abomination!"

Lithuania's State Border Guard Service rejected the claim, saying Belarusian authorities have repeatedly tried to stage and direct beatings, the crippling or even deaths of migrants while blaming Lithuania for such inhumane treatment.

Lukashenko also charged that Belarusian border guards found several other freezing migrants who were barely alive at an abandoned farmhouse near the border with Lithuania.

The EU has accused Lukashenko of waging a hybrid attack against the bloc, using desperate migrants as pawns and tricking them into trying to cross into EU members Poland and Lithuania to destabilize the entire bloc. The EU says that is Lukashenko's revenge for EU sanctions imposed on Belarus after its brutal crackdown on democracy protesters.

Belarusian authorities have denied the accusations and shot back at the EU, accusing it of failing to offer safe passage to migrants. Since Nov. 8, a large group of migrants, mostly Iraqi Kurds, has been stranded in Belarus at a border crossing with Poland, trapped in freezing temperatures as forces from the two countries face off.

Most of the migrants are fleeing conflict or hopelessness at home, and aim to reach Germany or other Western European countries.

Lukashenko on Monday had a call with Russian President Vladimir Putin in which they talked about the situation on the border with Poland, according to the Kremlin.

Lukashenko dismissed Western concerns about alleged Russian plans to invade Ukraine, which also borders Belarus, saying Moscow would have told him if it had such intentions. But echoing statements from the Kremlin, he warned Ukrainian authorities that if they try to use force to reclaim areas controlled by Russia-backed separatists in Ukraine's eastern industrial heartland known as Donbas, Belarus would stand squarely with Russia.

"If they try to launch a small war in Donbas or somewhere on the border with Russia, Belarus will not stay aside, and it's clear whose side it will take," he said.

Ukrainian authorities have voiced concerns that Russian troops could use Belarusian territory to invade Ukraine. The Kremlin has denied plans to launch such an attack and accused Ukrainian authorities and their Western backers of making the claims to cover up their own allegedly aggressive designs.

Information for this article was contributed by Liudas Dapkus and Yuras Karmanau of The Associated Press. 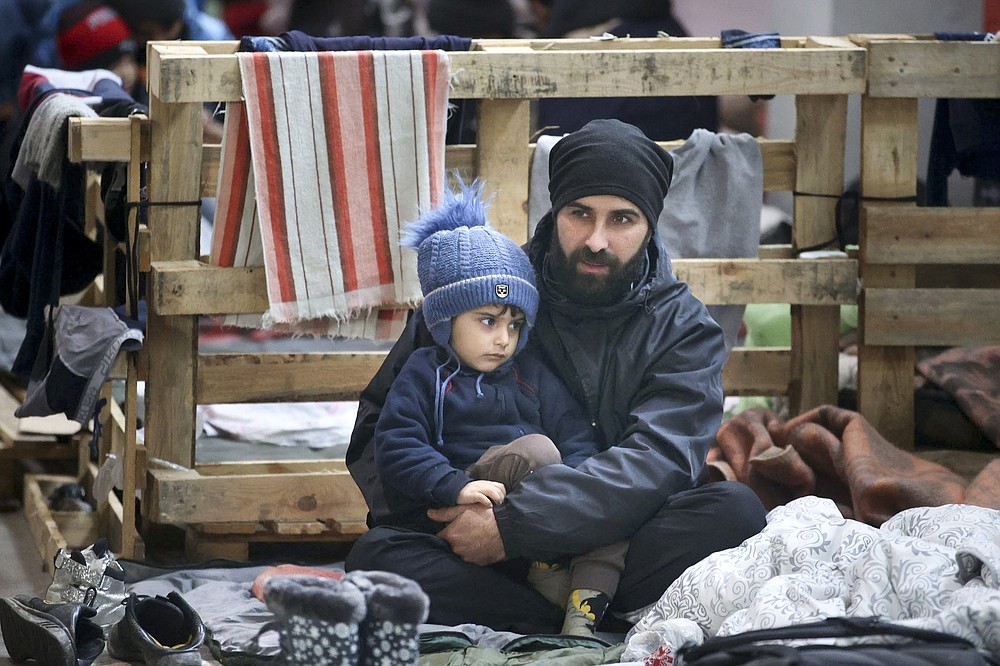 A man and his child rest inside a logistics center at the checkpoint &quot;Kuznitsa&quot; at the Belarus-Poland border near Grodno, Belarus, Sunday, Nov. 28, 2021. The West has accused Belarusian President Alexander Lukashenko of luring thousands of migrants to Belarus with the promise of help to get to Western Europe to use them as pawns to destabilize the 27-nation European Union in retaliation for its sanctions on his authoritarian government. Belarus denies engineering the crisis. (Leonid Shcheglov/BelTA via AP)