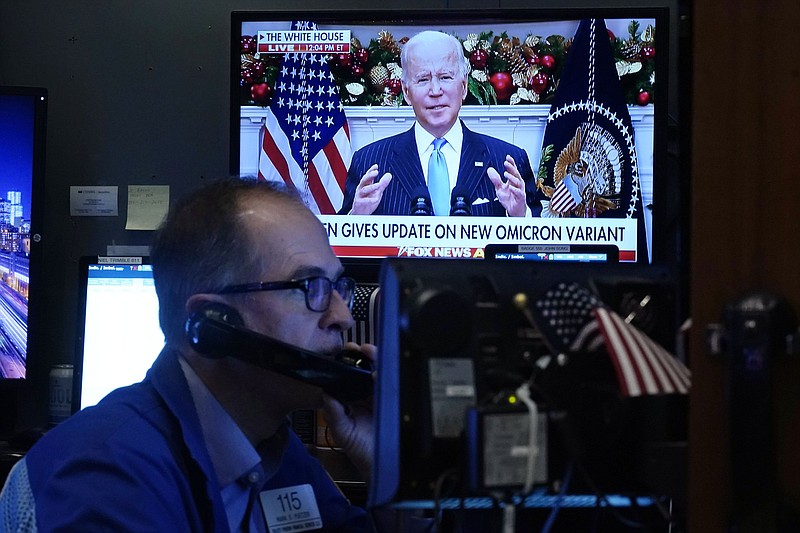 President Jose Biden appears on a screen as trader Mark Puetzer works on the floor of the New York Stock Exchange, Monday, Nov. 29, 2021. President Joe Biden urged Americans to get vaccinated including booster shots as he sought to quell concerns Monday over the new COVID-19 variant omicron. (AP Photo/Richard Drew)

NEW YORK -- Wall Street steadied itself Monday after last week's stock market slide caused by the newest coronavirus variant, with investors now waiting for more clues about just how much damage it may do to the economy.

The S&P 500 rose 1.3% to recover more than half of its drop from Friday, which was its worst since February. Bond yields and crude oil also recovered chunks of what they lost in traders' knee-jerk reaction to run toward safety and away from risky investments.

With vaccines in hand -- and the benefit of a weekend to mull whether Friday's sharp market moves were overdone -- analysts said the world may be in better position to weather this newest potential wave. Plus, Friday's tumble for markets may have been exacerbated by many traders taking the day off following Thanksgiving.

But while the market steadied itself, uneasiness still hangs over it due to the discovery of the variant now known as omicron. The variant appears to spread more easily, and countries around the world have put up barriers to travel in hopes of stemming it.

Still, to be seen is how effective vaccines currently available are for the variant, and how long it may take to develop new omicron-specific vaccines.

"There are still more questions than answers regarding the new variant," said Ryan Detrick, chief market strategist for LPL Financial. "At the same time, we've been living with covid-19 for almost 20 months now, and we've seen multiple variants."

The most powerful lift for stocks came from those that have been able to grow strongly almost regardless of the economy's strength or pandemic's pall.

Moderna jumped 11.8% for the biggest gain in the S&P 500, adding to an even bigger gain from Friday, after it said it's testing the effectiveness of its vaccine against omicron. Its chief executive officer said in a televised interview on ABC that it could take two to three months for manufacturing to begin on a vaccine developed specifically for the variant.

Travel-related stocks started the day with gains but fell back as more caution filtered into the market and as travel restrictions around the world remained in force. They ended mixed after President Joe Biden said he wasn't considering a widespread U.S. lockdown.

He said the variant was a cause for concern and "not a cause for panic." Delta Air Lines and American Airlines closed slightly lower, while cruise line operators Carnival and Norwegian Cruise Line notched gains.

"Because so much is still unknown about the omicron variant, it could take us a week or more to recover what we lost in a single day," said Sam Stovall, chief investment strategist at CFRA.

Information for this article was contributed by Alex Veiga of The Associated Press.