Foley up for next challenge 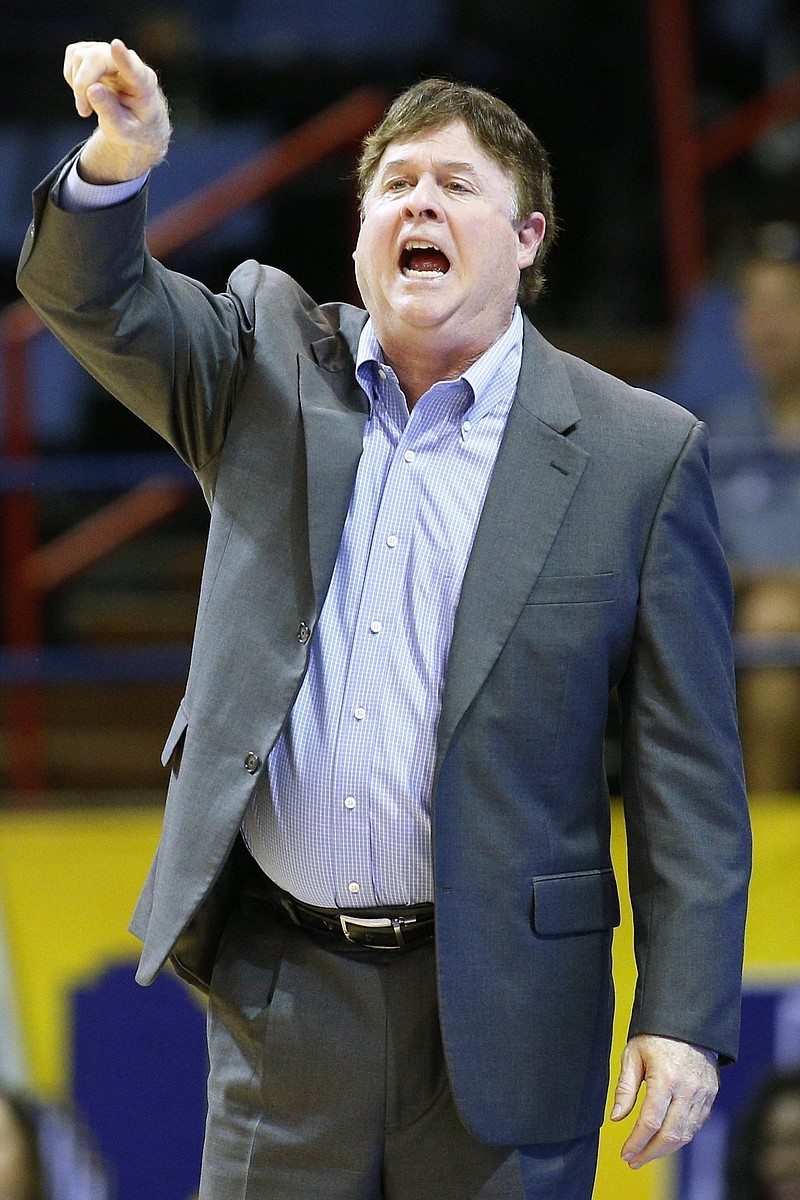 Coach Joe Foley’s UALR women’s team fi nished third in the Sun Belt Conference’s West Division last season and lost in the semifinals of the conference tournament. The Trojans — who are looking to replace the top three scorers from last year’s team — will be tested early and often this season, starting with a game against Missouri State on Nov. 9. (Democrat-Gazette file photo)

There's more than a month until the start of the 2021-22 season and University of Arkansas at Little Rock women's Coach Joe Foley is already thinking about breaking down tape ahead of the Trojans' first game.

The schedule begins with a Missouri State team that reached the Sweet 16 a year ago and features five SEC opponents over the first six weeks of the season.

"It shows these kids the challenges you've got to face to be good," Foley said a day after his Trojans kicked off the preseason with their first official practice Wednesday. "Our kids are going to know from Day 1 -- here's where we are and here's where we've got to go.

"They're going to get tested night in and night out. They can't hide from it, and I love challenges."

UALR finished third in the Sun Belt's West Division last season and lost in the semifinals of the conference tournament. The Trojans will be looking to replace their top three scorers from a year ago in Bre'Amber Scott, Brianna Crane and Teal Battle.

Foley expects to lean heavily on graduate student Krystan Vornes, who used her extra year of eligibility to return to the team, and she'll be the veteran presence among a group that includes eight new players.

One of them is transfer Raziya Potter, a California native who spent her first three collegiate seasons at San Jose State. Potter was averaging 12.5 points and 3.5 rebounds last season when the Spartans canceled their campaign after just four games due to covid-19.

For Foley, the official start to practice means more time, even if the Trojans won't use their full allotment of 20 hours in these opening weeks. Like every year, he expects UALR to focus on fundamentals before digging into extensive preparation for its grueling start.

"Every team is different," Foley said. "[If we find out] we're a pretty good fundamental team, we can take off from there."

There's a double-edged sword to things in Jonesboro.

Coach Matt Daniel admits he doesn't necessarily know which of his players are ready to take a step up this season. But it doesn't mean he's anxious about where his Red Wolves are as they practiced for the first time earlier this week.

"I know that there's not one player on our roster that I could put into a game right now and go, 'How are we going survive this?'" Daniel said. "And that is different from years past."

ASU finished near the bottom of the Sun Belt a year ago, its 4-10 conference record better than only 1-15 Louisiana-Monroe and 0-13 Coastal Carolina.

And while it seems like there's a lot of time to get ready to improve on last season, things are creeping up fast on the Red Wolves. They'll play an intrasquad scrimmage next week before playing a closed-door scrimmage in three weeks.

That's all before trips to Oklahoma and the University Arkansas in their first two weeks of the regular season.

The University of Central Arkansas began its 2021-22 season Tuesday with its first practice.

"I was very pleased with our first day of practice with all the nerves and so many new people," UCA Coach Sandra Rushing said. "We're learning that the pace of the game and I think that's important. It's a faster pace and we're trying to have that intensity in practice."

The Sugar Bears are coming into the season with a lot of youth, as they list six true freshmen on their roster.

"It's always a challenge," Rushing said of the team's youth. "I'm just anxious to see how we grow and mature."

While the Bears are young, they'll be returning two of their top scorers from a season ago. Lucy Ibeh, who averaged 12.8 points per game, is one of the team's four seniors. She was named the Southland Conference's Newcomer of the Year after transferring from Collin College.

Savanna Walker, who was the team's third-leading scorer last season, is returning to the program as a graduate student.

The Sugar Bears also have a hefty non-conference season ahead of them that includes Kansas State, Oklahoma and Tulsa, among others.

"I think our non-conference schedule is tough, which should challenge us and hopefully get us ready for the ASUN [Conference]," Rushing said.

Two practices down, an abundance more to go for University of Arkansas at Pine Bluff first-year Coach Solomon Bozeman.

Excitement and enthusiasm have been aplenty for the Golden Lions, who officially hit the floor running while ushering in a new era for the program under Bozeman.

"The energy has been so high in the first few practices," he said. "Guys out there competing against each other, it's just been unbelievable, especially on that first day. They're flying around, showing a lot of communication. Everything has been great."

Bozeman aims to keep it that way in his debut season.

The 33-year-old, who took over the program in June after George Ivory resigned following a 13-year stint, already has made a huge impact in a short period of time. Bozeman retooled the Golden Lions' line-up by bringing in eight new players, three of whom are Arkansas natives. And according to him, none have disappointed.

"We've got a super talented team," he explained. "I think our guys actually know how talented of a team we have. But they also know that now, it's about putting it all together. They were all amped to start practice, and it's really showed with the intensity they've played with. And it's all been at a high level."

The manner with which the team has been practicing has been a pleasant surprise for Bozeman, who spent the previous three years as an assistant at Oral Roberts. He also admitted that the Golden Lions, who finished 4-21 last season, are a lot mentally tougher than he initially thought.

"I still think we have to take it to another level as far as overall toughness," Bozeman said. "But we're going to take it one day at a time and continue to get better. We talk about winning pretty much every day, and I want that on our guys' mind.

"No matter what went on in the past, we just have that positive mindset because we're going to win here. That's who we are, and that's what we go by every day."

The Lady Lions, who saw a promising 2020-21 season derailed early because of key injuries and covid-19 cancellations, got things kicked off with what Thornton called a "energetic" session Thursday at H.O. Clemmons Arena.

"One thing about it is that we had a very highly competitive practice," said Thornton, who's entering her third season at UAPB. "I think that any coach that can see glimpses of kids just being resilient and being tough, that makes you a little bit more restful at night. We've been preaching defense all during the preseason and over summer workouts.

"So being able to kind of see it put together and them getting up and down on the first. ... I thought we were definitely able to see some good basketball that's ahead of us."

The Lady Lions do return key pieces, such as last season's SWAC Newcomer of the Year and leading scorer Khadijah Brown. UAPB also welcomes back guard Joyce Kennerson, who averaged 14 points per game before tearing her ACL in the team's first conference game, as well as guard Kalia Walker, who averaged just over 11 points.

"They all have a chip on their shoulders," Thornton said of her newcomers. "They're like 'This is my second chance, my second opportunity, and I want to get things right.' They want to do things the right way, but I've also got returners that are like 'Look, I've earned my spot here, and in order for you to be able to come in and play, you're gone have to come in and come at me everyday in practice.' So I reminded them, we didn't have much success last year.

"Losing [Kennerson] to a torn ACL, having some covid issues. But we had a good start, and I can honestly say we have that same spotlight shining on us right now."

Print Headline: Foley up for next challenge