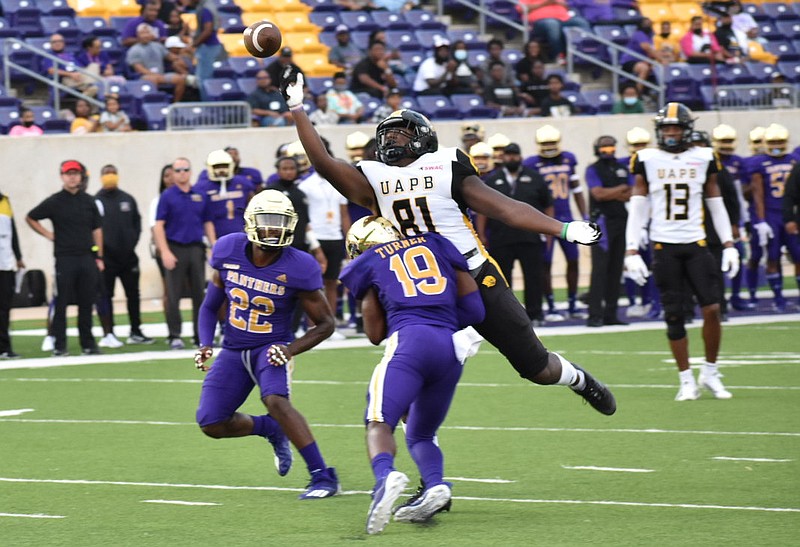 PRAIRIE VIEW, Texas – This whole thing of playing on a Thursday night hasn't worked out so well for the University of Arkansas at Pine Bluff lately.

A week after blowing a 19-point lead at home to Alcorn State, UAPB hardly stayed in step with Prairie View A&M and dropped a 27-17 decision, sliding to its first three-game losing streak since late in the 2019 season.

Prairie View (4-1, 3-0 Southwestern Athletic Conference), which lost 36-31 at UAPB on April 17, led for all but the first 5 minutes and 3 seconds and rolled up 468 yards of offense. Against a team that had struggled containing the pass, the Panthers gained 289 of those yards on the ground, finding holes in a team that had held opponents to 96.7 rushing yards per game going into Thursday.

Jawon Pass burned the Golden Lions' defense not just with the pass -- he was 18 for 29 for 179 yards -- but also with touchdown runs of 59 and 4 yards. Pass finished with 70 yards on seven carries.

Lyndemian Brooks bolted 83 yards on a touchdown run late in the first quarter to pad the Panthers' lead to 14-3. The graduate transfer from Grambling State finished with 118 yards on nine carries.

Skyler Perry, the Golden Lions' fourth-year starting quarterback, had another slow start, connecting on 3 of his first 13 passes for 29 yards. He was pulled at the start of the second quarter in favor of Xzavier Vaughn, and the redshirt freshman responded with an 82-yard touchdown strike to Josh Wilkes on his first pass.

"Zae stepped in and did his thing," Wilkes said. "He gave us momentum on the offensive side and gave the whole team some momentum."

Vaughn, who prepped two hours east of Prairie View in Beaumont, completed 4 of 8 passes for 115 yards. He relieved Perry again in the fourth quarter just after Raequan Prince scooped up a punt blocked by Dylan Smith and returned it 8 yards for a touchdown. Vaughn found Prince in the back of the end zone for the extra two points to draw UAPB (1-3, 0-2 SWAC) within 27-17.

"There was really no accomplishment at the moment," said Vaughn, who had appeared in two other games this season and was 0-for-2 passing going into the Prairie View contest. "I just wanted to allow our team to compete and give them the juice they needed. Skyler went down with a hand injury and I was the next man. There was no dropoff."

The Lions tried to set the tone on the first play from scrimmage. Pass struck Colbey Washington for 26 yards, but free safety Stanleigh Bentley stripped him and the Lions pounced on the fumble.

Both teams traded punts before Zack Piwniczka, who was injured last week on a muffed point-after attempt, got the first UAPB points with a 33-yard field goal at the 9:57 mark of the first quarter.

Luis Reyes hit field goals of 34 and 30 yards for the Panthers but missed from 41 yards out.

Vaughn tried to string together a late drive from the Lions' 18, but Troy James intercepted him and returned the pick 27 yards to the UAPB 8 to seal the victory.

UAPB will play at Alabama State University on Oct. 9.