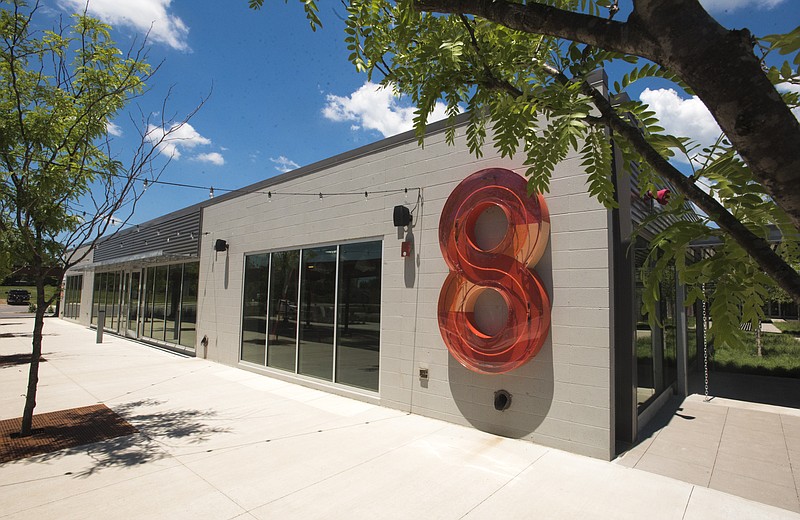 FILE -- Residents and visitors at Bentonville can now walk around 8th Street Market with their alcoholic beverages, rather than keeping them in assigned areas. The food hub has become the 8th Street Market Outdoor Social District. (NWA Democrat-Gazette/Charlie Kaijo)

This week, we cover a few recent developments at Bentonville's 8th Street Market, the popular cluster of restaurants and shops near the Momentary.

Many people learned how to bake during 2020. Sandi Macklom started a bakery.

"When I had to go gluten free eight years ago, I was really dissatisfied by the quality of the options available," she says.

Having grown up baking with her grandmother, Macklom decided she could do better, eventually selling baked goods to friends and family during the covid-19 pandemic.

Macklom, a Bentonville resident and student in Brightwater's baking and pastry program, says she was grateful that the first day was "far beyond what I had hoped for."

Residents and visitors in Bentonville can now walk around 8th Street Market with their alcoholic beverages, rather than keeping them in assigned areas of restaurants and bars.

The food hub has officially become the 8th Street Market Outdoor Social District after the City Council approved an entertainment district at the location in late August.

The ordinance requires that drinks be purchased and consumed within the district boundaries between 11 a.m. and 11 p.m.

"Same food, same family, new name," the Asian fusion kiosk posted on social media in August. "After getting countless calls from confused, out-of-state customers looking for their city's 'Dough Zone,' we have decided to change our name to 'Roll & Fold' -- as in rolling the dough and folding the dumpling."

Has a restaurant recently opened or closed near you? Does your favorite spot have a new menu? Let us know. Email gmoore@nwaonline.com.