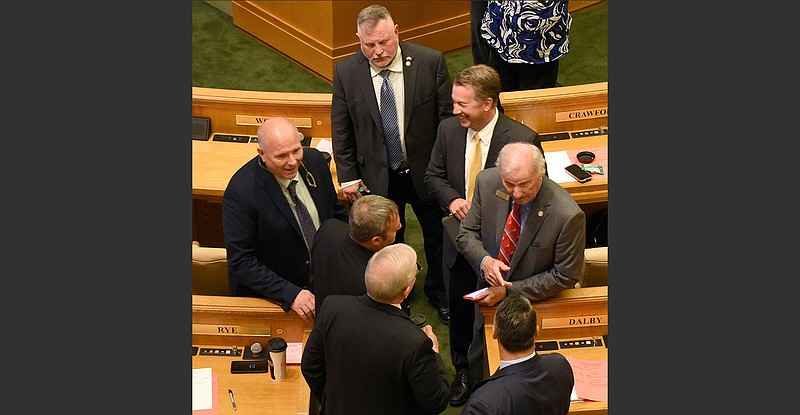 Representatives talk on the House floor during a recess Thursday at the state Capitol in Little Rock. (Arkansas Democrat-Gazette/Staci Vandagriff)

Arkansas lawmakers ended their second day of work Thursday on congressional redistricting without advancing any proposed map, but said they moved closer to a consensus.

The 93rd Arkansas General Assembly went back into session Wednesday, after taking an extended recess over the summer to wait for U.S. Census Bureau data from the federal government needed to redraw the lines for districts in which the state's four U.S. representatives serve.

Arkansas' population grew to 3,011,524 people in the past decade, making the ideal population for each district 752,881.

Much of legislators' discussion has focused on how to reconfigure the districts to offset those changes and which counties they would move to different districts or split to do so.

Chairmen of the House and Senate committees on State Agencies and Governmental Affairs, which in the Arkansas Legislature are tasked with hearing and voting on redistricting proposals, said lawmakers were getting closer to consensus on a map.

"There is just still some small disagreement, but it is disagreement, so we just need to keep working," said the Senate chairman, Jason Rapert, R-Conway.

He noted that House Bill 1971 by Rep. Nelda Speaks, R-Mountain Home, had garnered the most support among members of the House committee in a written ballot vote Wednesday, but some legislators wanted to see changes.

Legislative leaders originally hoped the session would be done today, but the end date now is unknown.

The House committee adopted an amendment to HB1971 in the afternoon. The updated version of the map moves Madison County from the 4th District to the 3rd District, and splits Pulaski County between the 2nd District and the 4th District.

Dividing counties between multiple congressional districts has been contentious as lawmakers discussed redistricting proposals over the past week. The current lines, drawn a decade ago, split five counties: Crawford, Newton, Sebastian, Searcy and Jefferson.

Pulaski County, the state's most populous county and home to the capital city, has been entirely in the 2nd District since the 1960s. The county is also more racially diverse than the state as a whole and is one of a few counties that consistently votes for Democratic candidates in deep-red Arkansas.

U.S. Rep. French Hill, R-Ark., has represented the 2nd Congressional District since 2015. His reelection campaign had no comment on the redistricting proposals.

The House committee endorsed amending the bill in a divided voice vote.

Rep. Fred Love of Little Rock, one of two Democrats on the 20-member committee, voiced opposition to splitting up Pulaski County, as have other lawmakers from the county who said it would split up a community of interest.

"I truly believe that we can do better and not split counties up. I just feel strongly, especially that Pulaski County is my home county, I just feel that it's not necessary for us to split any counties up," he said.

House Majority Leader Austin McCollum, R-Bentonville, said much of legislators' negotiations Thursday focused more on "keeping communities that do live together where we can" than on "the exact science of deviations," referring to how much the population of a district in a proposed map varies from the ideal population.

"They live in Madison, but they go shopping in Fayetteville, they all come over to Fayetteville, so we wanted to keep that together," he said, adding that part of Pulaski County had to be taken out to balance out the districts. "And once you put that Madison County in there, it's like, OK, where do you get the population for the 4th?... You have to grab some population from somewhere."

He said the portion of Pulaski County that would move to the 4th Congressional District is rural, much like the rest of that district.

"I don't know that you would know by driving through that you're going from these precincts that we've now put in the 4th to what is currently the 4th," he said.

Another aspect of House Bill 1971 is that it leaves Sebastian County whole and in the 3rd Congressional District, something lawmakers and other officials from that area have advocated for. Fort Smith, the state's third-largest city, is in Sebastian County.

The committee didn't move forward with considering that bill or any other piece of legislation Thursday. Tosh said afterward that he wanted to give Arkansans plenty of time to look at it and give input.

"We're just going to leave it where it's at at this time for the public to view it," he told the committee.

The Senate committee didn't meet Thursday. Rapert cited a lengthy debate that morning in the chamber, which ultimately sent several coronavirus-related bills back to the Senate Public Health, Labor and Welfare Committee for further vetting.

"With some of the other issues that have developed over the course of the day, we are going to pause and allow things to cool down a bit before we attempt to get votes on the maps," Rapert said.

Rapert said the lawmakers were "down to small things now like people that are advocating for their local areas."

He said he believed legislators were going to get to a consensus and were trying to pull together aspects of maps by Speaks; Rep. Jim Dotson, R-Bentonville; and Sen. Breanne Davis, R-Russellville.

He said, "the map that came out of 2010 was kind of like putting Humpty Dumpty back together again."

This year marks the first time since the Reconstruction era that a Republican-controlled Legislature will draw the maps. The GOP regained control of the General Assembly in 2013.

Rapert said there are people who had historically been in other congressional districts as opposed to where they are now and want to return to their old districts.

Asked whether it was a foregone conclusion that Pulaski County will be split between congressional districts, he said there are five counties split now, and the best option to split fewer counties is to split up the state's most populated county.

"This whole mantra of 'don't split counties,' somebody has got to give," he said. 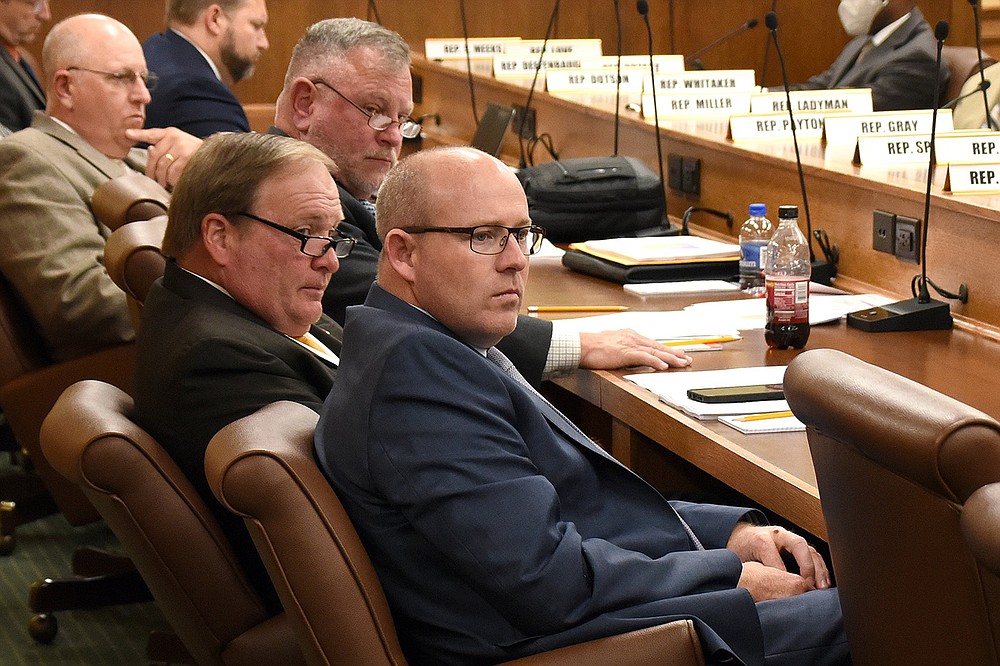