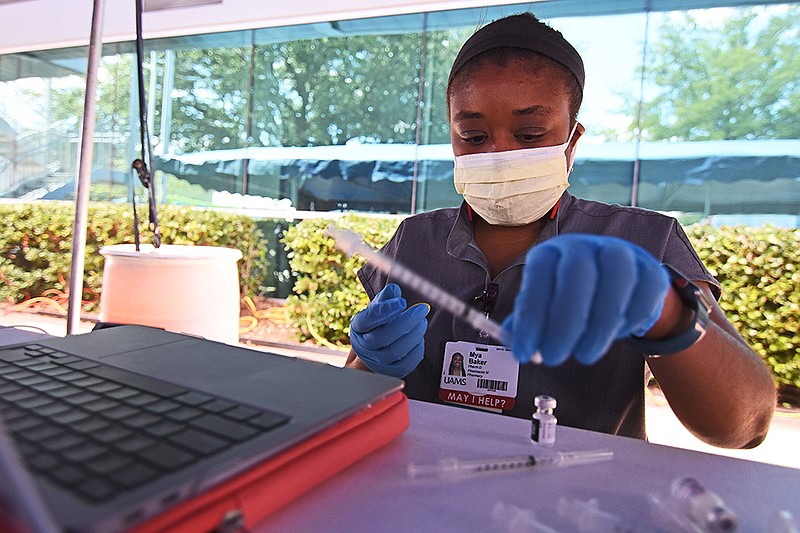 Mya Baker, a pharmacist for the University of Arkansas for Medical Sciences, prepares doses of the Pfizer coronavirus vaccine during the job fair and vaccine clinic hosted by the City of North Little Rock on Wednesday, Sept. 22, 2021, at the Chamber of Commerce. (Arkansas Democrat-Gazette/Staci Vandagriff)

The spread of the coronavirus in Arkansas appeared to be continuing to slow Thursday, with a report showing another drop in active cases in public schools, and the number of people hospitalized with the virus falling for the 10th day in a row.

The statewide count of cases rose by 1,004, the third daily increase in a row that was smaller than the one a week earlier.

Arkansas' death toll from the virus, as tracked by the Department of Health, rose by 21, to 7,691.

"The decline in new cases, active cases, and hospitalizations continues in today's report," Gov. Asa Hutchinson said in a tweet.

"The most disturbing fact continues to be the number of deaths from COVID and the Delta Variant. Let's encourage our loved ones to get that first dose when eligible."

Already at its lowest level since July 18, the number of covid-19 patients in the state's hospitals fell Thursday by 31, to 727.

The number who were on ventilators fell for the third straight day, going from 219 Wednesday to 211, its lowest level since July 28.

After falling the previous three days, the number who were in intensive care remained at 343.

People with covid-19 continued to make up about 31% of all of the state's intensive care patients.

"We're continuing to move in the right direction with regard to the cases and the hospitalizations," said Dr. Jennifer Dillaha, the Health Department's chief medical officer.

"I'm very pleased with that."

Virus concerns, however, prompted the White Hall School District this week to temporarily shift one grade level to virtual instruction.

The measure affecting fifth-graders at Hardin Elementary School started Wednesday and will continue through today.

"Our desire is to provide face-to-face instruction for our students; however, the number of positive and quarantined students in 5th grade at Hardin Elementary has increased to 30%," the district said on its website.

The district has a requirement for all people over age 2 to wear masks while indoors.

From Monday to Thursday, the number of active cases among public school district and charter school system students and employees fell by 70, to 2,060.

Since then, Health Department reports released twice a week have shown the number steadily declining.

The Springdale, Fort Smith and Rogers school districts Thursday continued to top the list of districts with the most active cases.

Springdale had 89 Thursday, up from 78 Monday.

The Springdale district, the state's largest, last month made masks optional for students and employees.

The Fort Smith district has a requirement for all students and employees to wear masks.

The board for the Rogers district, which previously had a similar policy, voted last week to make masks optional for staff members and students in grades seven and above.

The Cabot School District, which lifted its mask requirement last month for junior high and high school students and employees, was listed Thursday as having 52 active cases, up from 50 Monday.

The Little Rock School District, the state's second-largest and one that has maintained a mask mandate, had 27 active cases Thursday, down from 36 Monday.

In its daily coronavirus report, the Little Rock district said three students and two employees had tested positive in the 24-hour period ending at 3 p.m. Thursday.

An additional 13 students at seven schools were required to quarantine after being near an infected person.

In all, 123 of the state's 262 districts and charter school systems had five or more active cases Thursday. That's down from 136 districts earlier this week.

The reports do not list districts with fewer than five active cases, but the numbers are included in the totals.

According to the latest report, 19,480 public school employees and students have tested positive for the virus since Aug. 1.

Private kindergarten-through-12th-grade schools were listed as having 64 active cases Thursday, up from 51 Monday.

Private schools with at least five active cases were Shiloh Christian Schools, based in Springdale, with seven; Central Arkansas Christian in Little Rock with six; and Trinity Christian School in Texarkana with five.

Colleges and universities had 240 active cases among students and employees Thursday, a drop of 68 since Monday.

The University of Arkansas, Fayetteville was listed as having 50 active cases, down from 81 Monday.

Arkansas Tech University in Russellville on Thursday had the next-highest total, 19, followed by Arkansas State University in Jonesboro, which had 13.

According to the Arkansas Center for Health Improvement, 77 public school districts had 50 or more new cases per 10,000 residents within their boundaries over a two-week period, down from 147 a week earlier.

The number with 100 or more such cases fell from 28 to seven.

The cases include residents of the district, excluding cases among incarcerated people and residents of nursing homes and human development centers.

The Bentonville, Cleveland County, Fountain Lake, Magnet Cove and Pulaski County Special school districts remained the only ones in the state where at least 50% of residents had been fully vaccinated.

The percentages in those districts ranged from 53% in Bentonville to 50% in the Pulaski County Special district.

Thursday's statewide increase in cases was smaller by more than 500 than the one the previous Thursday.

As a result, the average daily increase in the state's case count over a rolling seven-day period, already at its lowest level since the week ending July 12, fell to 889.

With recoveries and deaths outpacing new cases, the number of cases in the state that were considered active fell by 235, to 10,385.

It was the 19th day in a row that the number had fallen.

According to CDC rankings Thursday, Arkansas' number of new cases per 100,000 residents in the seven-day span ending Wednesday was the 20th-lowest among the states and District of Columbia, down from the 22nd-lowest in the week ending Tuesday, as it fell from 234 to 224.

Alaska, with 10.9 deaths per 100,000 residents the week ending Wednesday, continued to have the highest rate.

Dillaha said 20 of the deaths reported Thursday happened within the past month, and the others occurred earlier in August.

The number of people who have ever been hospitalized with covid-19 in the state rose Thursday by 46, to 26,441.

At 9,743, the increase in vaccine doses that providers reported having administered, including second and third doses of the Pfizer and Moderna vaccines, was the third one in a row that was larger than the one a week earlier.

Almost half of the newly reported doses were third doses, including booster shots of the Pfizer vaccine that providers began administering late last week to certain people who received their second Pfizer shots at least six months ago.

But the increase reported by the Health Department also included 2,154 first doses, including the single-shot Johnson & Johnson vaccine, which was larger by 152 than the number of first doses reported a week earlier.

After falling the previous eight days, the average number of first doses administered each day over a rolling seven-day period rose to 1,670.

Including second and third doses, the average number of total doses administered per day over seven days rose to 6,715, its highest level since the week ending Sept. 15.

Among the states and District of Columbia, Arkansas continued to rank 37th in the percentage of its population who had received at least one vaccine dose and 42nd -- ahead of Louisiana, Tennessee, Georgia, North Dakota, Mississippi, Alabama, Wyoming, Idaho and West Virginia -- in the percentage who were fully vaccinated.

Nationally, 64.6% of people had received at least one dose, and 55.6% were fully vaccinated.