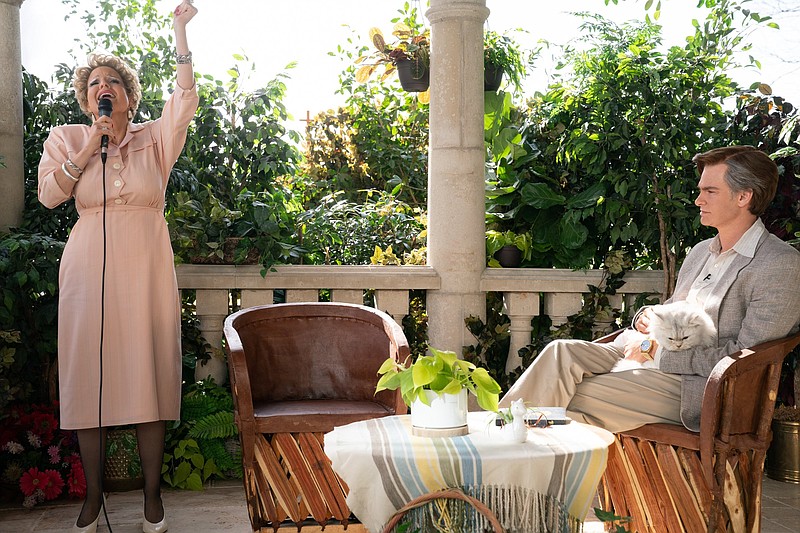 “Honey, God loves everybody.” Tammy Faye Bakker (Jessica Chastain) witnesses as husband Jim (Andrew Garfield) looks on in a scene from “The Eyes of Tammy Faye.”

Near the end of "The Eyes of Tammy Faye," Michael Showalter's affecting drama about fallen televangelists Jim and Tammy Faye Bakker, Tammy (Jessica Chastain), now on her own with her husband in jail, and her former ministry having shunned her, is walking from her car to her apartment, in a low-rent complex in L.A., when she hears a group of young men sitting outside, laughing at her.

Given what she has been through, and the tremendous amount of abuse she has endured in the public eye after the fall of her husband's empire, you might expect her to slink away, bitter and miserable. Instead, she strides up to the young men, and brightly introduces herself. "You can talk about me," she says, "but you have to meet me first." She extends her hand to greet each one of the taken aback young men, who have no choice but to introduce themselves right back.

In the last few years, there has been an important revisiting of once publicly shamed women from the '90s: Craig Gillespie's "I, Tonya" recast the infamous Harding spectacle as a tragicomedy, with the admittedly hardscrabble Tonya Harding (as played by Margot Robbie), explaining her side of the notorious hit job on her ice skating rival, Nancy Kerrigan. "American Crime Story: Impeachment," currently playing on FX, takes us back to the end of the Clinton era, when Monica Lewinski (as played by Beanie Feldstein), became the symbol of a tarnished presidency, and the continual butt of late-night host monologues.

Not surprisingly, what gets revealed in these exhumations is the actual humanity of these women. In each case, they were led astray by men they trusted, to become the ridiculed symbol of their imbroglios far more than the ill-behaved males who actually instigated them. Taken out of the headlines, and off the SNL-parody hit parade, what comes through is the crucial context of their lives, which, in turn, makes them much less easy to ridicule. They become immediately, recognizably human again, and worthy of our empathy.

We begin in earnest in 1960 Minnesota, as Tammy is attending a Pentecostal college and meets the charismatic young pastor-in-training, Jim (Andrew Garfield, with a relentlessly hairsprayed coif). They fall in love, and plan a traveling ministry, to the grumpy unhappiness of Tammy's no-nonsense mother, Rachel (Cherry Jones), who finds everything about her daughter too dramatic and overwrought.

Over time, the couple continue their barnstorming efforts to increasing enthusiasm, and when they hook up with another minister named Pat Robertson (Gabriel Olds), with his own TV studio, they take their Word to the airwaves, where Jim develops a Christian talk show called "The 700 Club," proving to be very popular. Soon enough, they've captured the attention of Jerry Falwell (Vincent D'Onofrio), a giant in the TV evangelical industry, who takes a shine to them, and their ability to turn out the donations.

You can see the seeds of Jim's eventual fall from grace early on. Where the taciturn, modest Rachel considers in poverty, a sort of piousness, Jim thinks God somehow wants his flock to be wealthy and ostentatious. For her part, Tammy Faye isn't sure about God wanting everyone rich, but she does firmly believe that God loves everyone, be they straight, gay, minority, poor, or full of sin. Despite her lofty stature amongst the power-wielding evangelicals, she is not, by nature, a judgmental person. As the years go by, and Jim and Tammy Faye's influence and control over their TV ministry, PTL (Praise The Lord) grows, she uses her well-attended pulpit to interview gay Christians, in the shadow of AIDS, giving them a voice in the otherwise brutally intolerant political atmosphere of the Reagan era.

Over time, however, her faith becomes supremely tested, as Jim turns farther away from her to tend to his endless plans for expansion and growth, putting the ministry under more and more debt. It gets even worse when his reckless fraud and the growing scandals around him -- being unfaithful to her with women and, it turns out, men -- finally take the couple down together, a once holy ship sunk by a gale of greed, avarice, and misplaced trust.

As with any film set over the course of several decades -- we see the Bakkers go from fresh-faced youngsters in 1960, to heavily burdened middle-aged adults in 1994 -- the aging process -- as constructed by make-up appliances and, we assume, some CGI -- can become distracting. One advantage to such an approach, however, is to show how small, seemingly incremental change can eventually lead to catastrophe: Jim begins as a "pro-wealth" sort of Christian, who believes, we understand, that God loves everyone ("He really does!" Jim and Tammy Faye both insist at the close of every broadcast), and Tammy Faye wholeheartedly believes in Jim. But over time, as Jim becomes more and more ambitious, and the pair leap into hyper-consumerism, you can practically see their love of God leaching from their souls.

When we see Tammy Faye in 1960, she's a sweetly enthusiastic young woman from modest means, who wears a bit of makeup. By the late '80s, she has gone full into garish mode, almost unrecognizable as a human being. Tammy Faye, a woman so entrenched with her signature "look" she has her eye-and lip liner permanently etched on her face, becomes all too easy to caricature. That makeup, with its outrageous false eyelashes, her skin an inhuman orange bronze, becomes a sort of facade for her to hide behind, armor against the judgment of others (though, ironically, it also becomes one of the things she gets judged most harshly upon), and, possibly, further hiding herself away from the unflinching eye of God, in the process.

As Jim and Tammy Faye, Chastain and Garfield are impressive, but as you can feel Garfield diligently working to channel the fallen pastor (an effect, it must be said, quite in keeping with the character himself); Chastain is so completely entrenched in Tammy Faye's character, so thoroughly inhabiting her sparkly skin, it feels perfectly effortless. It's an astonishing turn from an already much-lauded actress.

Interestingly, the film, despite the ludicrous ostentatiousness of its protagonists, doesn't share Tonya's satiric bent. It's not interested in lightening the material, or mocking its protagonists. Enough fun has been made of the couple, the tone suggests, with Tammy Faye herself turned into a catch-all punchline, an enduring, grotesque symbol of Christian hypocrisy and greed. Instead, Showalter depicts the rise and collapse of the Bakkers as a Greek tragedy: Good people done in by hubris and fate, wherein a truly God-loving humanist loses her way, shuttering herself from the holy in the name of crass consumerism, and standing by her eternally conniving man.

‘The Eyes of Tammy Faye’