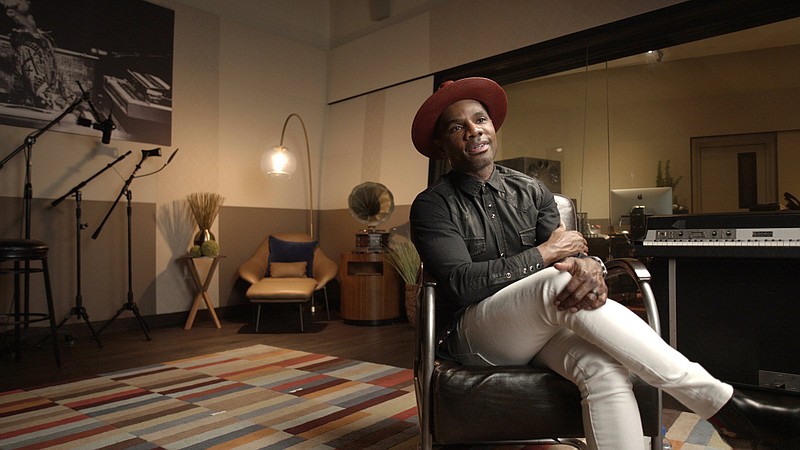 Urban contemporary gospel choir director, songwriter, producer and singer Kirk Franklin is one of the voices heard in the documentary “The Jesus Music.”

The opening scenes of "The Jesus Music" are so full of promise. A viewer might deduce from the expertly edited and choreographed sequence of key players and time signatures in contemporary Christian music that what's on the screen might be the foundation of an essential music documentary, comparable to the glorious affirmation of Black history, culture, music and fashion that "Summer of Soul" brought to movie screens in July.

It all started with a movement born at Calvary Chapel in Costa Mesa, Calif., where the era's hippies started accepting Jesus. "We found the power of God in that building," remembers a participant. "We got radically saved, and a lot of these folks were musicians."

The film sets a smart pace in defining contributions by the likes of pioneers Phil Keaggy, Keith Green, Andrae Crouch and Larry Norman, a controversial, rebellious, sex-and-drugs-and rock 'n' roll kind of guy criticized for making "devil music" which was not welcome at traditional churches.

That changed in 1972 at the Dallas Explo (short for Spiritual Explosion, often referred to as "Godstock") where 85,000 young people assembled for a gathering at the Cotton Bowl that concluded with a Jesus Music Festival featuring Johnny Cash, Rita Coolidge, Kris Kristofferson and Norman. Evangelist Billy Graham spoke to the crowd that weekend, where his presence helped put a seal of approval on folk and rock music styles that were previously shunned by the traditional evangelical community.

At that point, the flood gates burst open, encouraging the controversial entry of Spandex-wearing Christian metal bands like Petra and Stryper ("evangelists with lots of hair") tossing Bibles at fans and causing dissension. That's when Amy Grant made the scene -- the perfect breakout artist for Christian music. ("My music is like a good comfortable pair of house shoes," she said.)

She became a mainstream pop star by the mid-1980s, accompanied by Michael W. Smith, Newsboys, DC Talk, and many others who suddenly found the formerly gentle market fiercely competitive. And the world soon discovered that among Christian musicians are "gifted humans who sometimes make mistakes."

Just as the arc of the film heads into such turbulent waters, gospel singer/songwriter Kirk Franklin appears, and that's when this chronicle of a national spiritual awakening loses momentum. What began as a confident, clearly focused and expressed narrative suddenly scatters, as if the filmmakers forgot where it is they wanted to go.

It's odd -- and oddly selective. We might understand why Sandi Patty isn't interviewed, and we can forgive the elision of Leslie (later Sam) Phillips' career, but definitely question why Jesus music is depicted as emerging from such a specific location at such a specific time without any mention of gospel (and gospel-informed) performers like Aretha Franklin, Elvis Presley and Hank Williams.

Maybe there's a legitimate reason for not mentioning these forebearers but if so I failed to grasp it.

Likewise it seemed odd to present Jimmy Swaggart as an antagonist to contemporary Christian music without mentioning his own music career as a Southern gospel artist. Swaggart, who is a cousin of Jerry Lee Lewis and Mickey Gilley, regularly sang and played piano as part of his ministry and, in the 1950s, was offered a recording contract by Sun Records producer Sam Phillips (not to be confused with the aforementioned singer) for the purposes of starting a gospel division for the label. (Swaggart turned Phillips down, saying he was called to preach.)

In the final third the movie's pace stutters. Heartfelt remarks by key players descend into platitudes ("I love music" is patronizingly said more than a few times by performers, who make their living off it), questions that are posed are not answered, and now the catch phrase "contemporary Christian music" is rebranded to describe artists performing "worship music," vaguely defined as songs connected to God.

To be fair, we get the sense that worship music is distinct from CCM in that, as opposed to Mick Jagger's dictum, it emphasizes the song over the singer and represents a retreat from the pop star model that prevailed in the '80s and '90s -- which the choir to which this film preaches surely already knows.

Rating: PG-13, for some drug material and thematic elements