OPINION | REVIEW: 'Venom' has no sting 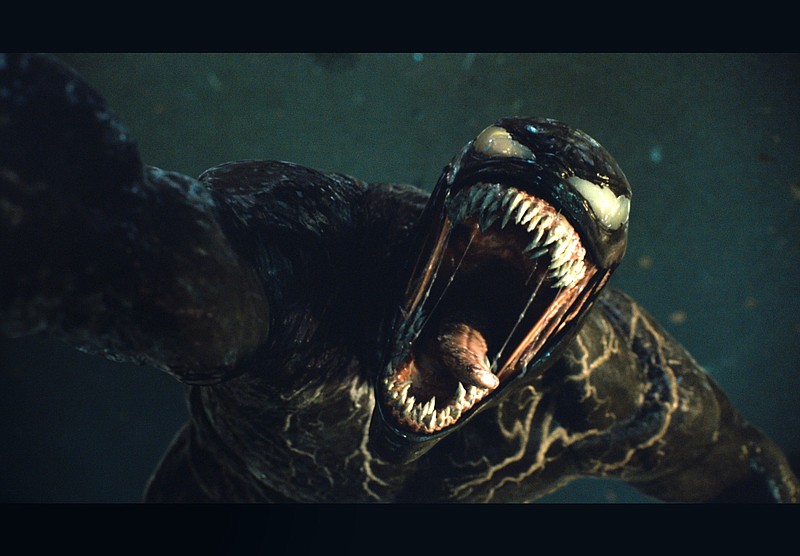 “You live in my body, you live by my rules.” Tom Hardy returns as Eddie Brock, the host of an alien symbiote called “Venom,” in the latest installment in the Marvel Cinematic Universe, “Venom: Let There Be Carnage.”

Director Andy Serkis is better known as an actor of CGI-enhanced, performance-capture creatures (Gollum, Caesar the Chimp), and/or an MCU villain (Ulysses Klaue) than a filmmaker. Though this film isn't his debut behind the camera, based on what we see here, he might want to keep his green body-suit handy.

The sequel to the equally uninspired "Venom," Serkis shoots for a slightly campy tone, with a series of jokes that don't really land (Venom wants to eat human brains all the time, and, failing that, chocolate), and busy set pieces that are to the left of remotely believable -- Sam Raimi as seen through a glass of rubbing alcohol. The gist of the film -- which finds our scruffy protagonist Eddie Brock (Tom Hardy), and his alien-symbiote alter-ego, Venom (also Hardy), head-to-head against another human/symbiote combo, serial killer Cletus Kasady (Woody Harrelson), and his toothy rage machine, Carnage (also Harrelson) -- is about how Eddie and Venom's relationship develops into something like a CGI-infused "Odd Couple" (in one scene, Venom, who often appears as tendrils shooting out of Eddie's back, makes a gigantic breakfast, in such a chaotic, disjointed way, even remotely OCD members of the audience will have to look away in horror).

Along the way, there are various other plot complications -- Anne Weying (Michelle Williams), Eddie's old flame, resurfacing with her new fiance Dr. Dan Lewis (Reid Scott) in tow, to help Eddie and Venom mend their ways; Cletus, meanwhile, seeks out his childhood love, Frances Barrison (Naomie Harris), to form an unholy union of scene-chomping actors -- but everything eventually gets forcibly worked out in a computer-generated battle royale in and around a picturesque San Francisco church, a climax that somehow goes on both far too long, and not nearly long enough.

Because there's a near constant dialogue between Eddie and the alien sharing his brainspace, there are many, many attempts at weaponizing their banter as comic gristle ("We should be out there, snacking on bad guys!"), but too often the jokes die on the vine, and there's precious little else to hold onto. Hardy and Harrelson have some fun doing their thing, but the movie feels terribly perfunctory (including a moment where Carnage actually announces the title out loud) ... right up until the end-credits end scene, which serves to connect this franchise (under the Sony/Columbia Pictures handle) with the rest of its previously distant MCU cousins, setting the stage, one presumes, for Venom and the gang to meet up at last with the rest of their comic cohort.

‘Venom: Let There Be Carnage’

Rating: PG-13, for sequences of violence and action, and language

Print Headline: 'Venom' has no sting