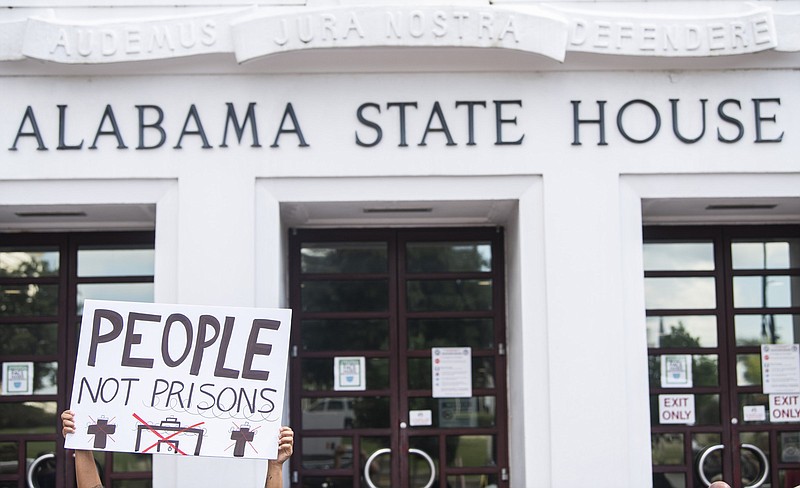 MONTGOMERY, Ala. -- Amid a national debate over the use of pandemic relief funds, Alabama lawmakers swiftly approved a plan Friday to tap $400 million from the American Rescue Plan to help build two super-size prisons, brushing off criticism from congressional Democrats that the money was not intended for such projects.

In a bipartisan vote that brought few dissents, the Alabama Senate voted 29-2 to approve the $1.3 billion prison construction plan, and 30-1 to steer $400 million of the state's $2.1 billion from the rescue funds to pay for it.

With legislative leaders standing behind her, Gov. Kay Ivey signed the bills into law. The Republican called the construction plan "a major step forward" for the prison system that faces federal court orders and a lawsuit by the U.S. Department of Justice.

"This is a pivotal moment for the trajectory of our state's criminal justice system," Ivey said.

Republican Sen. Greg Albritton said state officials are confident they can legally use the pandemic funds. The construction to replace many existing prisons will "go a long way" to addressing the state's longstanding problems in prisons, he said.

"This was the right thing for Alabama to do. We've got crumbling infrastructure. We've got people housed in places that are filthy. We've got individuals in working in conditions that are unsafe, " Albritton said.

President Joe Biden's sweeping $1.9 trillion covid-19 rescue package was signed in March, providing a stream of funds to states and cities to recover from the pandemic.

Alabama's plan prompted sharp criticism from some congressional Democrats who said prison construction was not the intent of the relief bill. Republicans said the rules give them discretion to spend the money on what they see as their greatest need.

The U.S. Department of Justice has sued Alabama over a prison system "riddled with prisoner-on-prisoner and guard-on-prisoner violence."

In an earlier report, it said dilapidated facilities were a contributing factor to the unconstitutional conditions. The Justice Department wrote, however, that "new facilities alone will not resolve" the matter because of problems in culture, management deficiencies, corruption, violence and other problems.

Democratic Sen. Billy Beasley, the only senator to vote against the measure, had opposed the bills and expressed concern that correctional facilities in his district could close under the plan, striking an economic blow to his rural district. He and several Democrats urged the state to quickly allocate the remaining $1.7 billion in American Rescue Plan funds to health care and other needs.

"The hospitals in Alabama have really been under tremendous pressure. ... We need to do more out of the rescue money to help the hospitals in the state of Alabama," Beasley said.

Ivey responded in her own letter, writing, "The Democrat-controlled federal government has never had an issue with throwing trillions of dollars toward their ideological pet projects."

Asked Wednesday about Alabama's plan, White House press secretary Jen Psaki said, "I would be surprised if that was the intention of the funding."

Republican legislative leaders said they are comfortable they can legally use the funds because the American Rescue Plan, in addition to authorizing the dollars for economic and health care programs, says states can use the money to replace revenue lost during the pandemic to strengthen support for vital public services and help retain jobs.

The Alabama prison construction proposal calls for three new prisons -- a prison in Elmore County with at least 4,000 beds and enhanced space for medical and mental health care needs; another prison with at least 4,000 beds in Escambia County; and a women's prison -- as well as renovations to existing facilities. Six current facilities would close.