Firefighters sound off during town hall 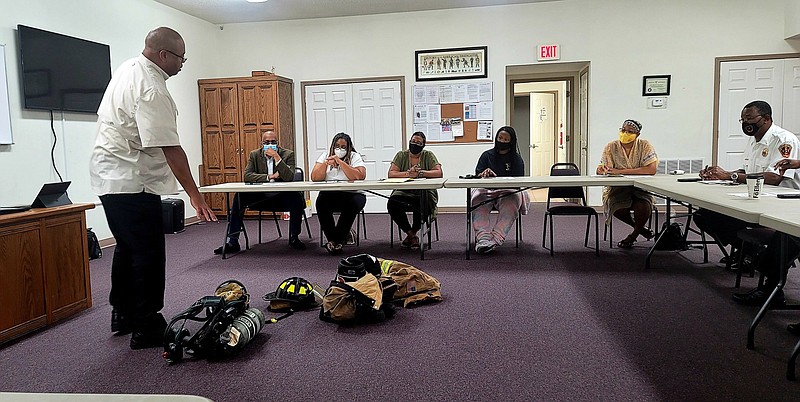 In discussions about public safety in Pine Bluff, the city's fire department sometimes gets overlooked.

That is according to Fire Chief Shauwn Howell, who spoke at a town hall meeting this week.

The United Citizens of Pine Bluff wrapped up their community town hall meetings last week and have now turned their attention to getting input from the public safety community.

Howell and some of his staff had a roundtable discussion with the citizen-led organization to bring attention to the fire department, a division of public safety.

Chairmembers Kymara Seals and Michael McCray, along with members Kerri Williams and Teki Hunt, were in attendance on behalf of the organization to listen to the concerns of a dozen firefighters who had anywhere from two months to 35 years of experience.

Howell said the survey conducted by the organization was heavily focused on crime and even though crime is not necessarily the fire service's primary focus, they still respond to every call.

"Fire, police, EMT, dispatchers, we're all one big network and we all play a role because we can't go to one call without getting dispatched," Howell said. "We all work together. When you say public safety, it's not one entity by itself."

The chief said reducing crime would have a domino effect because that would mean a reduction in the number of times the fire department is "brought into the situation."

"All of those calls go to the fire department as well," he said. " If we can play a role in helping to reduce those numbers, then it will be beneficial to us."

Hindering the fire department's ability to efficiently do it job are a lack of tools, the staff agreed.

According to Howell, the department needs hand tools, ladder trucks and engines, which can cost up to $800,000, as well as fire station upgrades, and personnel.

"It's a constant issue and challenge to be able to recruit and retain members," said Howell, who added that his budget allows for 100 employees but that he only has 85 currently. "Salaries and benefits are not great."

Lt. Fabian Fontenot agreed, saying that in order to compete with other cities, Pine Bluff's starting salary needed to be in the mid-$40,000 range.

According to the city of Pine Bluff financial records, starting salary for the Fire Department begins around $37,000.

"We feel like we're a training ground here," said Fontenot, Fire Station No. 2 captain and president of the Pine Bluff Firefighters Association. "We get firefighters in. They get their time in and we'll get them trained through the fire academy and they are already looking for other jobs in other cities."

The reason, according to Fontenot, is because the city of Pine Bluff is behind in salary and benefits and is running at a "snail's pace" to address the revenue woes.

Fontenot credited the city and Pine Bluff for their efforts in removing blight and said that it has helped tremendously. The city is broken up into seven fire districts, and in just one district alone, some 150 vacant homes have been identified.

Lt. Randy Compton said the fire department regularly makes recommendations to the city of Pine Bluff Code Enforcement but the budget has been an issue.

"When it comes down to the money, nobody has it," he said.

"A lot of the crime that we are learning about, those abandoned homes are shelters or a meeting point where a gang will go meet up at midnight to go out and wreak havoc," Seals said. "When you talk about the crime you have a bunch of empty structures and the property owner may not even live here and then you got gang activity."

Fontenot said one of the biggest crimes that his department sees isn't even on a survey of citizens about crime.

"Arson," he said. "A lot of this, when crime happens, turns into retaliation on families. You'll have guys that will get mad and go burn down someone's house."

The group sent out a survey earlier in the year that showed that many people in the city are fearful of crime.

Other issues pointed out by the fire department were insufficient lighting throughout the city and overgrown trees.

Lt. Mozell Gipson said a lot of the streets that vacant structures sit on don't have lights.

"If the building was on fire and if there is not a light on the corner, it's hard to find the fire hydrant," said Gipson, who is also the president of BRAVE, a firefighter organization. "A lot of these vacant structures don't have the grass cut. You don't know if there is a hole there when you go to put the fire out."

He also spoke on behalf of his wife who he said had taken the group's survey and noted that lighting was a reason people didn't feel safe getting out at night.

Howell said even when firefighters use their own lights, overgrown trees hinder the effectiveness of the lighting.

The firefighters said they wanted to communicate to the group that their jobs were important when it comes to public safety and that when their department is left out of the public conversation on public safety, they feel that it is a disservice to them and the fire department. The message seemed to get through.

Seals said they would be compiling all of their concerns and issues to present to the city council at a later date.