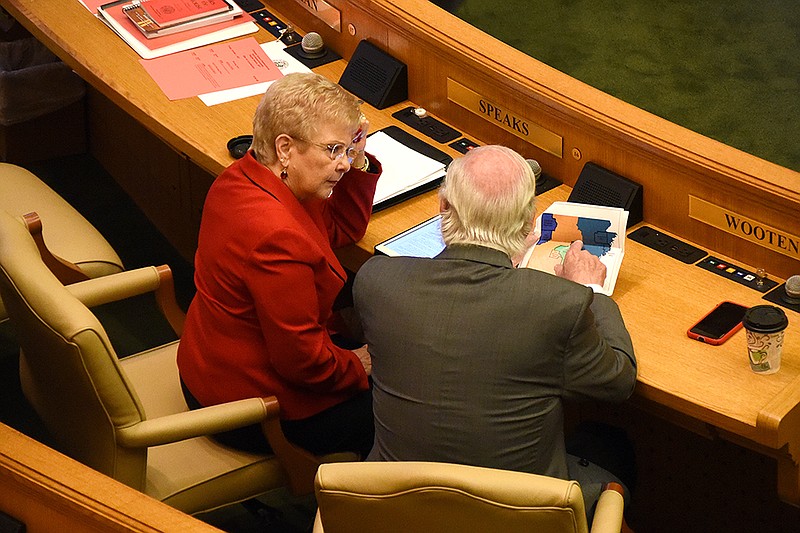 The bills are in response to the mandate of President Joe Biden's administration that will apply to businesses with more than 100 employees, requiring workers to be vaccinated or submit to weekly testing.

Friday was the third day of this year's extended regular session, in which several measures designed to respond to the federal mandate have overshadowed lawmakers' largely behind-the-scenes work to try to reach agreement on legislation redrawing congressional districts. So far, no redistricting bill has cleared a Senate or House committee. The House and Senate will reconvene Monday morning after taking the weekend off.

The General Assembly intends for the bills to protect employees in Arkansas from being fired for not getting vaccinated and to create the ability to financially assist employees with testing costs associated with the mandate, including using federal American Rescue Plans funds.

Hammer said his bill is aimed at providing "a reasonable, common-sense approach to overreach" by the Biden administration.

The bill may conflict with rules ultimately issued by the U.S. Occupational Safety and Health Administration and the U.S. Center for Medicare and Medicaid Services, he said.

"We may go head to head with the federal government" threatening to pull millions of federal dollars from the state, Hammer acknowledged.

Nonetheless, numerous people begged the Senate committee to enact legislation to protect them from being required to get covid-19 shots, saying they feared possible adverse effects. They said they want the freedom to decide whether to take a vaccine and don't want to be fired for refusing one.

The Biden administration last month announced it would expand coronavirus vaccination requirements to cover staff within all Medicare- and Medicaid-certified facilities.

"The Medicare conditions of participation are the lifeblood of hospitals' ability to be financially stable," Tritt said.

"In many of our hospitals, that would financially cripple them, not to mention lots of insurance contracts with us are based off Medicare and Medicaid rates. If we're no longer participating in the Medicare or Medicaid program because the feds say we're not following enough of their regulations, it puts us in a dramatic bind," Tritt said.

The department operates seven facilities that receive Medicare or Medicaid funding, he said, including the state's five human development centers.

But Rep. Justin Gonzales, R-Okolona, said lawmakers have heard about multiple bills that purportedly put funding at risk, so he asked White if that had ever happened before.

White said the state had been able to work things out in the past.

"So no," Gonzales replied.

White said the federal government may give state law some consideration, but it's not required to guarantee funding.

"And there is the supremacy," he said, referring to the legal principle that prohibits states from interfering with the federal government's exercise of its constitutional powers.

Under HB1972 and SB739, an employer that requires or is mandated to require a preparation that is used to stimulate the body's response against diseases for covid-19 and its variants, including a vaccination or immunization, for its employees "shall provide a specific exemption."

The exemption process would be required to include options that allow the employee to produce either a negative antigen detection test result or molecular diagnostic test result no more than one time per week showing that the employee is not positive for covid-19 or proof of immunity for the virus that causes covid-19 or its variants two times per year, not to exceed one time every six months, from a licensed health care provider or through a serological test.

Under the bills, the employee may provide test results obtained outside of the employer or licensed health care provider if the test meets certain federal guidelines.

The cost of the testing "shall be covered through any state or federal funding made available," including federal American Rescue Plan funds, if the employee's health benefit plan does not provide coverage for the testing, according to the bills.

Alan McVey, chief of staff for the state Department of Finance and Administration, warned the Senate committee that the department projects the cost of this testing could be hundreds of millions of dollars of federal American Rescue Plan funds. But Hammer suggested the finance department's projected cost is overblown.

If an employee complies with the requirements of the specific exemption process related to covid-19 as required by the bill, "the employee shall not be terminated for mandates related to coronavirus 2019 (COVID-19)," according to the bills.

"Nothing in this section should be interpreted to modify any other agreements between the employer and employee or to amend or affect the employment-at-will doctrine, whether written or otherwise," under these two bills. If enacted into law, the measures would sunset on July 31, 2023, unless extended by the General Assembly.

Also Friday, the Senate Public Health, Labor and Welfare Committee endorsed Senate Bill 732 by Sen. Blake Johnson, R-Corning, which would bar a business, person or any other legal or commercial entity from coercing another person to receive a vaccination or immunization from covid-19 under certain conditions.

Under the bill, the coercion would be prohibited if the vaccine or immunization for covid-19 is "medically contraindicated" as attested to by a doctor's note, or if the person objects on the grounds that it would conflict with religious or philosophical beliefs.

Under the bill, if the employer does not give consideration for these conditions and takes punitive action against an employee, the employee may seek lost wages.

An employee who seeks lost wages "shall be reimbursed comparable to unemployment benefits in this state" through federal American Rescue Plan funds or any other federal funds that may become available.

Randy Zook, president and CEO of the Arkansas State Chamber of Commerce/Associated Industries of Arkansas, told the Senate committee that the group generally opposes any bill that interferes with companies' relationship with their employees, such as barring employers from requiring their employees to be vaccinated against covid-19.

The employers requiring their employees to be vaccinated against covid-19 are motivated primarily by a desire to protect their other employees and their customers from covid-19, he said.

Many employers won't require their employees to be vaccinated for covid-19, while some will, he said.

Hammer asked which businesses are represented by the Arkansas State Chamber of Commerce. The senator said, "We are getting conflicted messages from employers" about requiring vaccinations.

Zook said the chamber represents 1,200 members. Smaller employers are probably more likely not to require their employees to be vaccinated, he said.

Jim Hudson, deputy director of operations and general counsel at the Arkansas Economic Development Commission, said the bill would put employers between a rock and a hard place and force them to decide whether to comply with a federal mandate or state law.

The U.S. Occupational Safety and Health Administration's mandate that will apply to businesses with more than 100 employees, requiring workers to be vaccinated or submit to weekly testing, will be "an incredibly heavy hammer," and the employers are going to follow the federal standard, he said.

The federal standards will preempt state law under the supremacy clause, Hudson said.

The Senate committee also approved two other covid-19-related bills for consideration by the Senate.

Senate Bill 730 by Sen. Trent Garner, R-El Dorado, would allow the state Division of Workforce Services to pay unemployment benefits to an individual terminated for refusing to be vaccinated.

Garner said his bill is aimed at making it clear under state law that these fired employees are eligible for unemployment benefits.

An employee or individual who is injured by an employer in violation of the proposed law would have the remedies and procedures available under the Arkansas Civil Rights Act of 1993, according to the bill.

SB731 would allow the state Department of Finance and Administration to establish a grant program with distribution of covid-19 relief funds or funds received under the federal American Rescue Plan to provide restitution to individuals injured by a violation of the measure.

Ballinger said Hammer's SB739 is "the compromise bill" and he plans to hold SB731 in the Senate if Hammer's bill clears the chamber. He said he believes Hammer's bill has a chance to get 24 votes in the 35-member Senate.

For the covid-related bills to take effect immediately, they must have an emergency clause that is approved by two-thirds of the Legislature -- 24 votes in the Senate and 67 votes in the 100-seat House. Otherwise, the bills take effect 90 days after the session ends.

Gov. Asa Hutchinson said Friday that his general view is that the current legislative session should be limited to the redistricting decision and anything beyond redistricting violates the constitutional limitations on extended regular sessions.

"I will not make any decision on the bills under consideration at this time since I expect further amendments and changes as the bills proceed through committees and it is undetermined whether any bills will actually be passed," the Republican governor said in a written statement. 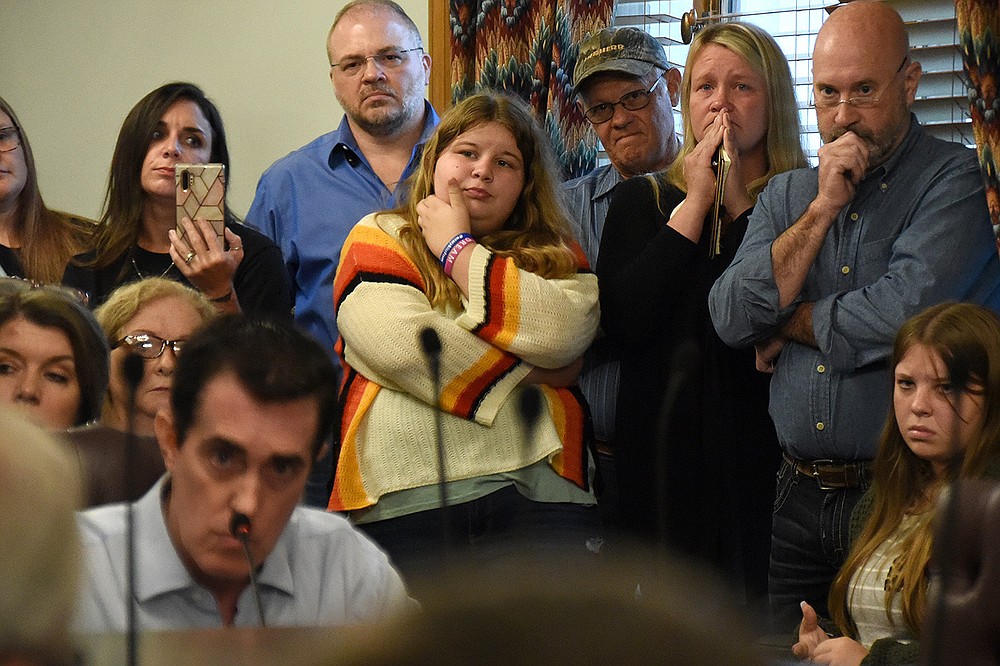