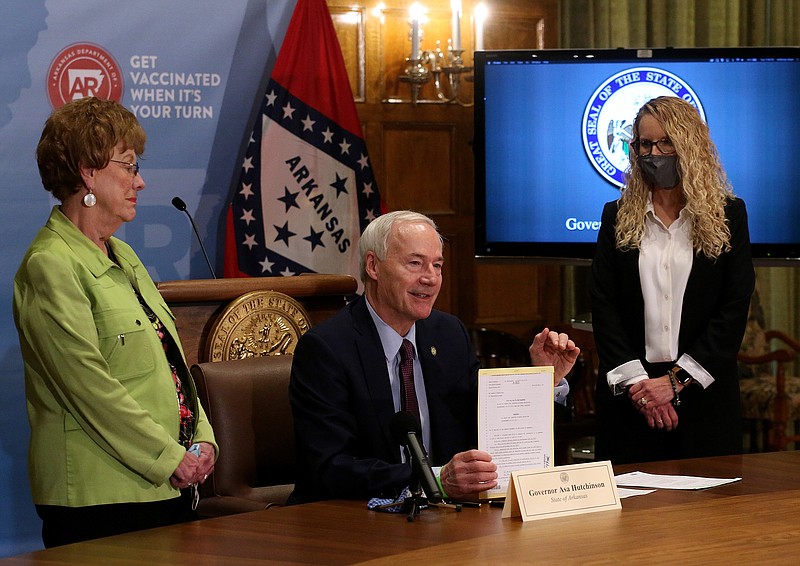 Gov. Asa Hutchinson touted Arkansas' success in furthering computer science education as he unveiled an initiative to take the program nationwide at a luncheon of the National Governors Association on Friday in Washington, D.C.

The initiative encourages governors around the nation to implement the tenets of Arkansas' program in their home states in order to build a wider tech workforce and keep computer jobs from going overseas.

"It is an initiative that is urgent and it is very necessary," Hutchinson said.

Carl Frank, a computer science teacher at the Arkansas School for Mathematics, Sciences and the Arts, said he was excited to hear Hutchinson's announcement. Frank has served on two of the governor's task forces on computer science education and cybersecurity and on numerous standards and framework committees for the Arkansas Department of Education and what is now the Division of Career and Technical Education.

"The success of the Arkansas Computer Science Initiative and the multistate collaboration efforts and partnerships that have been formed here may serve as a model to other states," Frank said. "Every state has unique challenges and perhaps solutions to those challenges. A national computer science initiative will help facilitate strategies that work among the states, and provide mechanisms for sharing new ideas and approaches that may emerge."

Hutchinson told the group gathered in the National Press Club ballroom that jobs that require computer science skills will continue to grow and there are currently more than 410,000 open computing jobs.

"Today, coming out of the pandemic, through the pandemic, the need has never been greater to emphasize computer science education," he said. "Take advantage of this unique moment in history when students see it, understand it and value it."

Global competition for computer science jobs is intensifying with the majority of H1B skilled-worker visas coming from companies that cannot fill their openings, Hutchinson said.

Furthermore, the U.S. Bureau of Labor Statistics projects that the number of computer science jobs will grow by 11% by 2029, Hutchinson said. Computer science majors earn up to 40% more than the average college graduate.

Arkansas became the first state to require every public and charter high school to offer a computer science course when Hutchinson's initiative was implemented six years ago.

The Arkansas School for Mathematics, Sciences and the Arts in Hot Springs led the project by providing training, support and mentoring for teachers across the state, who in turn provide computer science courses to students in their districts.

In 2014, before the initiative began, fewer than 500 high school students in Arkansas took a class in computer coding, and 25% of that number hailed from the Arkansas School for Mathematics, Sciences and the Arts.

Today, more than 10,000 of the state's high school students have taken a computer science class, and the number of computer-science certified teachers has grown from fewer than 20 to more than 600, Hutchinson said.

Hutchinson has been to more than 80 school assemblies in the state promoting computer science.

"The message that I had for them is, 'If you learn to code and you have access to high-speed broadband internet, you could run the the world from your front porch in rural Arkansas," the governor said.

There are six major goals of the NGA initiative, Hutchinson said:

• Increase the number of the nation's high school students who take at least one computer science course.

• Engage more governors in the partnership.

• Increase the funding by the states to support computer science education.

• Expand the number of states that require public and charter schools to have at least one computer science class for high school students.

Hutchinson praised the bipartisan support for the initiative from numerous governors around the nation.

Frank said Arkansas has already helped to shape computer science in other states through collaboration and through the participation by Arkansas members of the Computer Science Teachers Association in developing a multistate computer science licensure test.