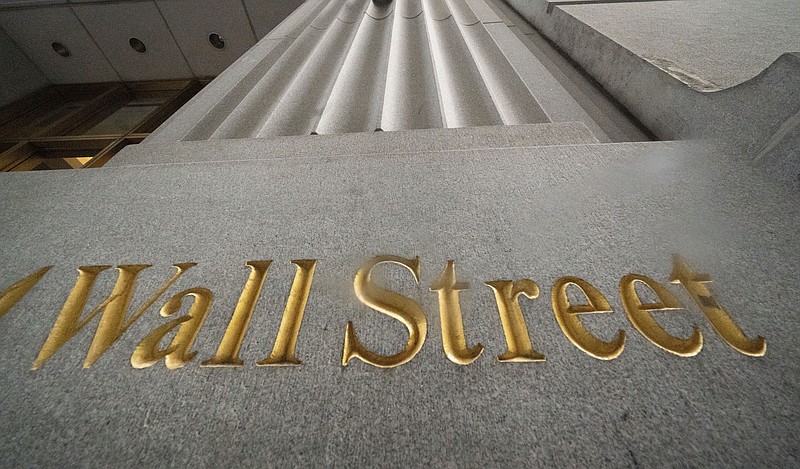 FILE - In this Nov. 5, 2020 file photo, a sign for Wall Street is carved in the side of a building, in New York. Stocks are opening slightly higher on Wall Street Friday, Oct. 1, 2021 a day after closing out September with their first monthly loss since January. (AP Photo/Mark Lennihan, File)

Wall Street rebounded Friday, led by companies that would benefit most from a healthier economy, but not by enough to keep the stock market from its worst week since the winter.

Merck helped pace the market and leaped 8.4% after the drugmaker reported its experimental pill to treat covid-19 cut hospitalizations and deaths by half.

Energy producers, financial companies and other businesses whose profits are often closely tied to the economy's strength were also helping to lead the way.

The market's widespread gains weren't enough to make up for a dismal last few days. The S&P 500 still dropped to a weekly loss of 2.2%, its worst since February. A swift rise in interest rates earlier this week rattled the market and forced a reassessment of whether stocks had grown too expensive, particularly the most popular ones.

September was also the worst month for the S&P 500 since March 2020, when markets plunged as covid-19 shutdowns took hold. Among the worries that have weighed on the market: The Federal Reserve is close to letting off the accelerator on its support for markets, economic data has recently been mixed following an upturn in covid-19 infections, corporate tax rates may be set to rise and political turmoil continues in Washington.

The Federal Reserve has said it expects high inflation to be only transitory and that it's the result of an economy roaring back to life from its earlier shutdown. But if it's wrong, the Fed may have to raise interest rates earlier or more aggressively than it's telegraphed to markets.

Economic reports were mixed Friday. The nation's manufacturing grew faster than expected last month, but an August reading for the Federal Reserve's preferred measure for inflation was a bit higher than forecast. They follow a disappointing report on Thursday showing more people filed for unemployment benefits than expected.

Such data means "you hear the word 'stagflation' come up once in a while, which would be the worst outcome" said Rich Weiss, chief investment officer of multi-asset strategies at American Century Investments.

Stagflation is when economic growth stagnates but inflation remains high. Weiss doesn't expect that to happen, so long as the pandemic doesn't cause more global shutdowns, but he also is not positioning his investments as if he's optimistic about big future gains for stocks.

"We're not swinging at the pitch right now," he said. "We are neutral."

Information for this article was contributed by Elaine Kurtenbach of The Associated Press.