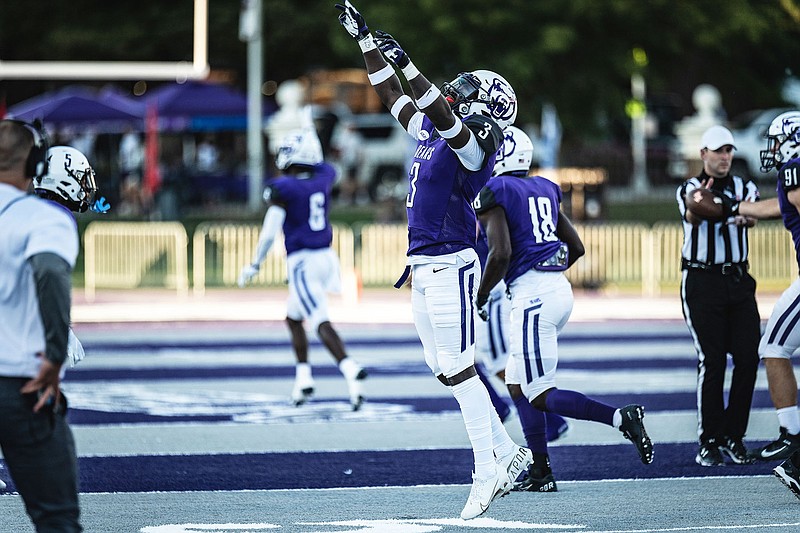 Central Arkansas defensive back Deandre Lamont has described his role with the Bears this season as being a cornerback, safety and linebacker all in one. Lamont and the Bears (1-3) are at Abilene Christian today looking for their second victory of the season. (Photo courtesy Central Arkansas Athletics)

Since his freshman year, Deandre Lamont had always played a traditional cornerback role on the Central Arkansas defense.

This year, however, Lamont's made a position change, going from cornerback to nickel back on the Bears' defense under first-year defensive coordinator Matt Kitchens, and he's become a bigger cog in the defense as a result.

"I think that's why you're seeing Deandre Lamont be a stat-stuffer," UCA Coach Nathan Brown in referencing the Bears' defense. "You like him against a lot of these offenses that you're playing that spread you out and move the ball around."

Lamont was approached about the position change in May and it was something he was all for, he said, as it'd give him more of a chance to showcase his versatility.

"I've seen I can do a lot more on the field," Lamont said. "With the game of football, I just know that being a versatile player, you're more useful on a defense, on a football team, period."

While Lamont has made physical changes -- he's listed at 190 pounds this season, as opposed to 182 pounds in 2020 -- in his new role, he said the biggest change has been the amount of film he watches.

The nickel back finds every season that he's watching more film, but with his growing involvement as a run defender, the amount he's watched this season has continued to increase. He also finds himself watching a lot of NFL film, he said, specifically of players like Minkah Fitzpatrick, Jamal Adams and Tre'Davious White.

In UCA's 4-2-5 base defense, Lamont's position is technically one of the five defensive backs. However, his role encompasses as many as three different positions at times. Against the run, Lamont sets the edge, but in pass protections, he'll often cover slot receivers, usually in man coverage.

"It's a [cornerback], safety and linebacker all in one," Lamont said.

Brown said the structure of UCA's defense isn't all that different from year's past, despite this being Kitchens' first year as the team's defensive coordinator.

Kitchens came to the Bears from South Alabama, where he served as the program's special teams coordinator and safeties coach for three seasons under former UCA Coach Steve Campbell. Prior to that, he held the same role for Campbell in Conway.

"From an overall standpoint, it's probably similar to where we were in '17," Kitchens said of the UCA defense. "Obviously, I put my own tweaks and my own likes and things that I've done before, but a lot of what I do is based off of the time I've been with Greg Stewart."

Stewart served as the Bears' defensive coordinator from 2014-17 and left with Campbell for South Alabama.

UCA (1-3) has had three different defensive coordinators -- Maxwell Thurmond, Chad Williams and now Kitchens -- since Stewart's departure, but all three have all coached alongside Stewart at some point.

Since becoming UCA's defensive coordinator, Kitchens has enjoyed being able to work every position group on his side of the ball and learning as he goes.

"I think, as you go through it, you're realizing more and more things," Kitchens said. "I'm a better coordinator today than I was yesterday. And it's been so much fun. It's a blast right. I've got a great staff that I work for, I've got a great head coach, but there's not a book for it."

NOTEWORTHY UCA’s Deandre Lamont has been named the ASUN’s Defensive Player of the Week twice this season. … As team, UCA has continued to rake in weekly conference awards, having at least one player honored by the ASUN since its Week 1 loss to Arkansas State; Lamont, Logan Jessup, Breylin Smith, Trysten Smith; Tyler Hudson and Darius Hale have all received weekly selections. … Hudson is No. 2 in the FCS in receiving yards with 488 yards on 26 catches, avering 18.8 yards per catch. … Coming into today’s game, Abilene Christian is No. 7 in the FCS in pass defense, allowing 140.5 pass yards per game.