Ideas for parks in Pine Bluff come up at city forum 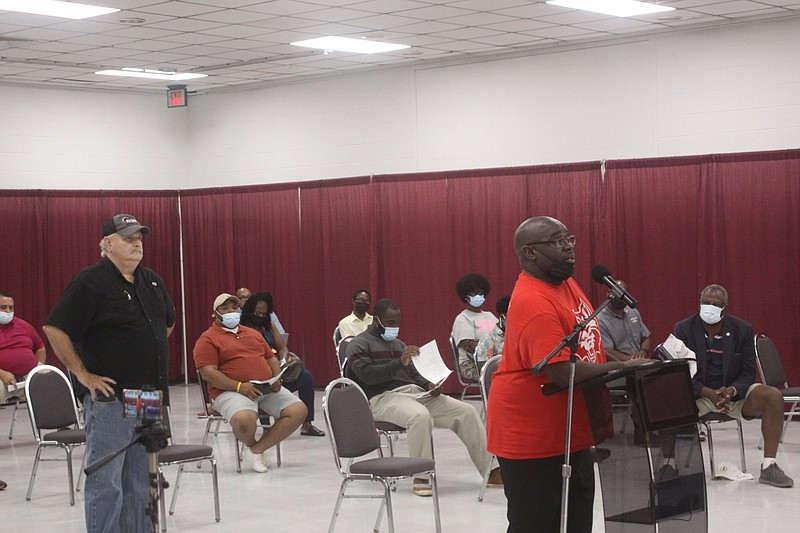 Pine Bluff residents, concerned about everything from litter and youth activities to welding programs and amusement areas, turned out last week to attend a Pine Bluff Parks and Recreation listening forum held at the Pine Bluff Convention Center.

Washington said those activities must cater to the young and the young at heart, many of whom were present at the meeting and ready for their voices to be heard.

Anthony Freeman of Pine Bluff said he has played softball for more than 35 years, a sport that was once a revenue generator for Pine Bluff.

"This is a softball and baseball city, and we need our Regional Park back," said Freeman, who added that the co-ed league would draw several teams to the area that now play in Redfield.

Another popular sport missing in Pine Bluff, according to John Ashcraft, are fishing tournaments. Ashcraft said those types of tournaments bring in a substantial amount of revenue, and he actually knows someone who is wanting and willing to have a tournament in Pine Bluff.

"As soon as the casino can get their hotel built and provide security, that tournament is coming," said Ashcraft, referring to Saracen Casino Resort, which has plans to build a hotel connected to its casino.

But before any tournament could be brought to Pine Bluff, Ashcraft said the city needed to do something about the litter.

"If you go out to Regional Park right now and you go on the backside of the lake, there is enough garbage to fill up the convention center room," said Ashcraft, suggesting Cotton's office could assist with a grant for surveillance cameras. "We have got the best fishing there is in Arkansas. All of these people want to come to Pine Bluff, but they're scared--scared they are going to get their stuff stolen and they don't like the trash."

Teki Hunt said she agreed with the concern about the litter problem and suggested a rotating schedule be implemented to help with the abundant amount of trash that accumulates over the weekend. Currently, Parks and Recreation staff work Monday to Friday, but Hunt says adjusting some of their schedules to cover the weekends would help.

"Saturdays and Sundays are your prime park days, and if people are going out Friday evening, Saturday to the park, by Sunday all the trash cans that are there are full," said Hunt, who told the group that she brings her own trash bag to clean before enjoying the park.

Washington also agreed that there was a trash problem and said people are using the parks as a dump.

UAPB students and alumni came to speak on behalf of the city's youth population. Recent graduate Jordan Simms, 22, of Pine Bluff suggested that, when the city plans events for youth, those plans should also involve "youthful and creative minds."

He also suggested activities be offered, if possible, every weekend, to keep idle minds from entertaining negative activities.

"They are either going to rob somebody or kill somebody," said Simms. "They're planning right now to rob or kill somebody this weekend because they already see there is nothing else to do."

Brown Sr. and Alexander disagreed with Simms' statement. Brown Sr. said there were things to do and excuses shouldn't be made for committing a crime.

Alexander said she was frustrated because the conversation about youth never includes the majority of that demographic.

Alexander also agreed with Brown Sr. in saying there were plenty of things to do in Pine Bluff, but she said she feels that parents are seeking activities where they can just drop their kids off and leave.

"What we need are more parents interested in the programming that is going to be provided for their children," said Washington. "That's what's missing."

As citizens spoke one by one and provided their wish list from miniature golf, a bow-and-arrow range, bowling and a recreational sports league, the panel overall seemed pleased to see so many people who cared about the quality of life in Pine Bluff.

Many citizens requested that there be more development in their wards. They also asked that the ballfields in the parks be restored to regulation so they could be used.

Whitfield, who represents the 3rd Ward, said he does not even have a recreational facility in his ward, something he would like to see changed. He also was encouraged by the dialogue of the meeting and the fact that the young people got to share their thoughts.

"I thought us old people were going to get in here and spend money for the young people without talking to the young people," said Whitfield. "I'm so glad that those young individuals did get a chance to speak. We heard you tonight. When it comes time for us to invest the money, your voice will be heard."

Washington entertained the idea to create a ward council, challenging the City Council members to take control of their wards.

"Ward councils you can choose citizens in that ward to be your ward mayor and your council members," said Washington. "Mrs. Alexander has been asking me ever since she has been on the council, 'can we have a budget for a project in our ward?' That's something to consider. I think it might work."

As Glover listened to the comments, he took note, saying later that many of the ideas floated were already in the works.

"As Park and Recreational professionals, we are trying to balance our responsiveness and innovation," said Glover. "What makes that successful is listening and changing and revising what we currently do."

"It was very encouraging to see that the citizens are fed up with the liter problem," Glover said. "We have a serious littering issue."

Glover said his department has a clean team of up to three people who pick up garbage, but fighting a community that comes into an area to create a dumping site makes it difficult to keep up.

To combat litter, all panelists agreed it would take the efforts of the entire community to adopt a spot to keep clean.

To date, the Parks and Recreation Department has brought in almost $1 million in grants for the parks. Glover said those funds will help pay for some of the requests of the citizens. He also said there are more things to do in Pine Bluff than many people know about.

"Our parks are beautiful, we have programming that is going forth, and we have to get everyone to engage and to participate," said Glover. "We need volunteers on every level and we need people to support what is already there and support what we are trying to implement for them."

Print Headline: Ideas for parks in PB come up at city forum