Mission to Mercury captures rare images of craters on planet 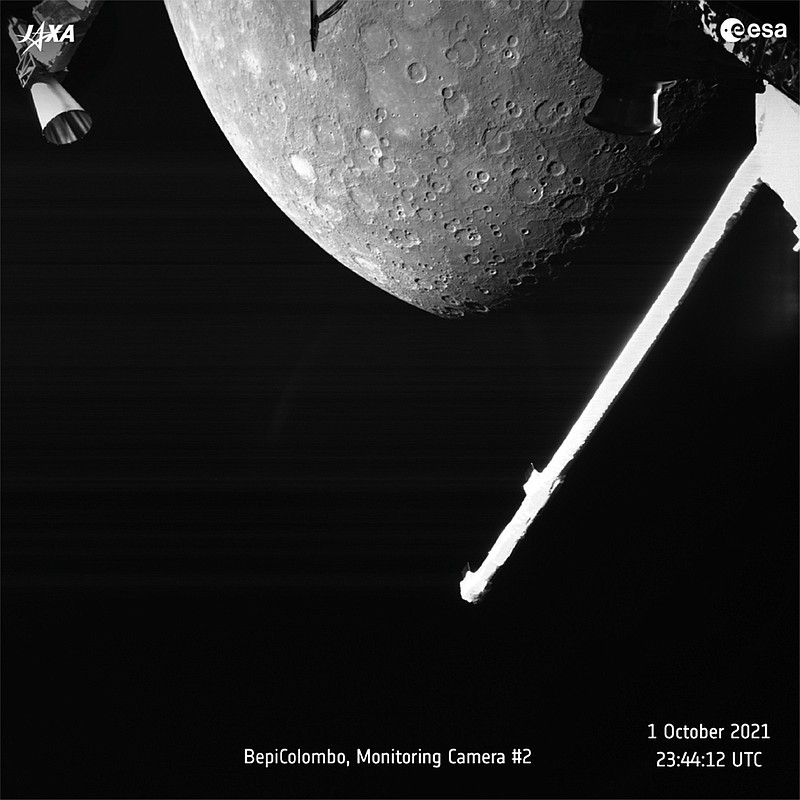 LONDON -- Europe's space mission to the smallest and least-explored terrestrial planet in our solar system, Mercury, sent back its first images of the planet after a flyby.

The BepiColombo joint mission between the European Space Agency and the Japan Aerospace Exploration Agency comprises a spacecraft containing two orbiters. It launched in 2018, and will take seven years to arrive at its destination some time in late 2025.

The black-and-white images were taken on Friday and published on Saturday after the spacecraft flew past the innermost planet of the solar system to undertake a gravity-assist maneuver -- essentially a move that uses gravitational pull to help slow the spacecraft down.

The images, taken by the spacecraft's monitoring cameras about 1,500 miles from Mercury, show part of the planet's northern hemisphere, which has been flooded by lava, and a smoother and brighter area characterizing the plains around a large crater, the ESA said. They also show some of the spacecraft's structural elements, including its antennas and magnetometer boom.

Mercury's surface is dark almost everywhere and was formed by vast outpourings of lava billions of years ago, producing a scarred and cratered surface that on first glance can resemble the Earth's moon, the European Space Agency said.

BepiColombo will study these features once in orbit around the planet, along with Mercury's magnetic field, composition, geophysics, atmosphere and history. It will also try to perform a test of Einstein's theory of general relativity while enduring temperatures higher than 660 F.

"The flyby was flawless from the spacecraft point of view, and it's incredible to finally see our target planet," said Elsa Montagnon, spacecraft operations manager for the mission, in a statement.

This mission was the first of six "gravitational flybys" of Mercury set to take place, each honing the spacecrafts' trajectory, before it can be caught by Mercury's gravity and enter its orbit. To do so, BepiColombo must approach the planet from precisely the right position, something which scientists have spent years planning and calculating meticulously.

The mission is named after Italian scientist Giuseppe 'Bepi' Colombo, who is credited with helping develop the gravity assist maneuver that NASA's Mariner 10, the first spacecraft sent to study Mercury, undertook when it flew by the pockmarked planet in 1974.

Keen night-sky watchers can follow the mission's travels with its next Mercury flyby due on June 23, the European Space Agency said, and can expect more rare images to be released in the coming days.