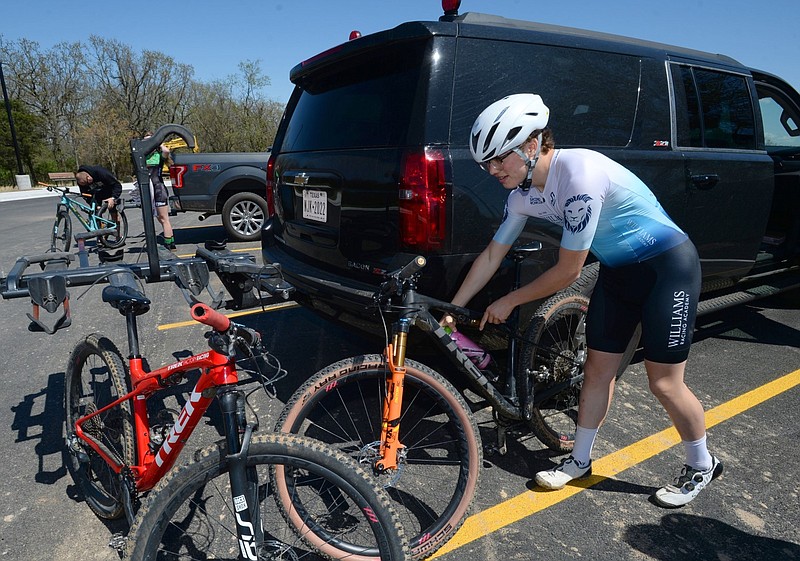 Cullen Darr, 14, of Jacksonville, Texas, prepares his mountain bike to ride at Centennial Park in Fayetteville in this April 8, 2021, file photo. Darr and his family were in town to ride in the inaugural OZ Trails U.S. Pro Cup, an Olympic mountain bike-qualifying event being sponsored by Experience Fayetteville. (NWA Democrat-Gazette/Andy Shupe)

Arkansas is picking on Texas again, but not in football this time.

The Northwest Arkansas Council and allies launched an ad campaign Monday in three cities after a test run in Austin, Texas. The campaign wants to draw people who have technical talent or are starting a business -- or both -- to Northwest Arkansas. The effort will continue in Austin and expand into Denver, Minneapolis and Seattle.

"It sounds like you're trying to do to us what we did to California," said Bryan Poppe, spokesman for the Austin mayor's office, when asked Wednesday about the Northwest Arkansas effort.

The campaign – "Life Works Here" – grew out of last year's incentive-based relocation campaign created by the council with the same name. That campaign offered $10,000 and a mountain bike to professionals working from home in other parts of the country who moved to Northwest Arkansas.

To date, 53 of those professionals received grants -- and 34,243 applications were received. Those applications had addresses on them, said Frances Webster, co-founder and chief executive officer of Walrus. The New York-based advertising agency implemented the next phase of the program along with St. Louis-based public relations agency FleishmanHillard.

The ad agencies used research data showing where top-tier technical talent lives as the top criteria to select the four cities, Webster said. The applications for the cash awards and the mountain bikes shed light on where people who are interested in Northwest Arkansas live, she said. Every one of those 34,243 applications contained an address. That helped with city selection, she said.

"It's an expensive proposition," Peacock said when asked about the effort's cost. He declined to give specifics.

This effort isn't trying to spur growth where there is no demand for it, he said.

Mention New York City, Chicago, Los Angeles – or Austin, Seattle, Denver and Minneapolis – and a definite mental picture springs to mind for most people, Webster said. People who have never seen one of those cities still have impressions of each.

Northwest Arkansas isn't so set in the public mind, she said.

"The product is amazing, but people have to come and see it," Webster said.

One reason the region lacks a conspicuous national profile is also one of its strengths, Webster said. The region is a work in progress. The still-growing aspect is a strong draw among people who inquire about it, she said. People considering a move there like the idea of helping to shape the community.

"You can have an impact on what's happening in the region," she said. And the region has strong leadership working to make sure success doesn't spoil the quality of life, she said.

Other cities made mistakes during their periods of rapid growth, mistakes Northwest Arkansas wants to avoid, Peacock said. Traffic congestion and runaway housing prices, for instance, are the consequences of growth without careful planning.

Getting a grip on such problems won't be easy, but Northwest Arkansas groups such as the council, its allies and cities within the region are making a coordinated effort at it, according to Webster.

"This will be a model for urban planners for decades to come," she said of the region's efforts.

The advantages Northwest Arkansas has over other congested urban centers are things the region should want to keep, Peacock said.

"We have a cost calculator that compares cities and find a lot of differences in costs where Northwest Arkansas has an advantage," Peacock said. "Things like housing prices and cost of living are big components, but we're also finding things like the time spent commuting in other cities is an advantage for us.

"The market does not take care of these things on its own," Peacock said. Regional effort on housing, transportation, workforce development and quality of life issues, like trails and preserving the local environment, are all needed, he said.

Choosing to live in a bigger, more-developed city often requires sacrifices in family considerations, Webster said. Northwest Arkansas keeps a balance, she said. The region is a good place to build a career and raise a family.

The potential for family was one consideration in her decision to move there, said Kim Bryden, founder and chief executive of Cureate. Her business helps market local sources, advising producers and retailers.

"If you have a business on the side making ice cream or salsa and would like to leave your day job and do that full time, we help you," she said. Likewise, if you're a grocer, cafeteria, coffee shop or other business offering food and would like to connect with local suppliers, Cureate will make those arrangements.

Bryden's business succeeded in the mid-Atlantic states from the company's base in Washington, D.C., according to Bryden and news accounts. She wanted to expand the business and decided the best way to pick a new location was to go take a look -- driving from Washington and scouting locations from West Virginia to New Mexico.

Northwest Arkansas appealed to her before she knew the $10,000 reward and mountain bike prize was available. She applied, won and moved to the region in July.

Bryden doesn't have children but wants them in the future, she said. That was a factor in choosing this location, with its attractions and access to still-unspoiled nature. But it was only one factor. The entrepreneurial outlook of local suppliers and merchants; the support received from local chambers, the council and others; the room to grow the business; and other factors made the decision, she said.

"Everything just clicked," she added.

"If you had asked me about Northwest Arkansas before I came here, I would have said 'What?'" Bryden said.