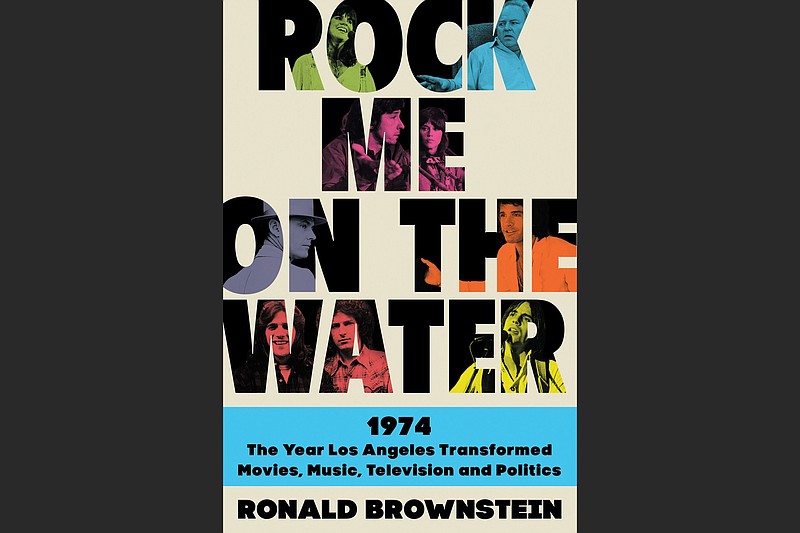 "Rock Me on the Water: The Year Los Angeles Transformed Movies, Music, Television, and Politics" by Ronald Brownstein (Harper, $29.99)

It's tempting to think of Los Angeles as a factory town, churning out entertainment product. We stereotype it as a haven for hacks and studio suits, the last stop of the sold-out. It's been characterized as a cynical closed shop since "The Day of the Locusts."

James Ellroy — since decamped to Denver — remains its local poet. A newspaper magnate I know once cruelly said he'd never invest in a rag there because it wasn't profitable to write for people who moved their lips when they read.

L.A. is plastic. L.A. is kitsch. L.A. lacks the authenticity of New York, Chicago, New Orleans or even San Francisco.

But there was a time when L.A. was the cultural engine of the country, if not the world. In the early '70s, something was happening in Hollywood. The French New Wave begat "Bonnie and Clyde," which begat "Easy Rider," which ushered in an age of movie-brat auteurs making deeply personal films for sophisticated adult audiences. Movies like "Chinatown," "Shampoo" and "The Godfather, Part II."

A cadre of musicians in Laurel Canyon specialized in a highly specific brand of singer-songwriterism that hit a sweet spot for the Baby Boom generation. David Geffen was ascendant; Joni Mitchell, Jackson Browne and Linda Ronstadt recorded for his Elektra/Asylum Records. So did the Eagles.

Even the vast wasteland of network television was energized. In 1974, CBS' Sunday night lineup consisted of "All in the Family," followed by "M*ASH," "The Mary Tyler Moore Show," "The Bob Newhart Show" and "The Carol Burnett Show." Archie Bunker may have lived in Queens, but all those shows were produced in Los Angeles.

It would be arbitrary to confine the L.A. renaissance to a single calendar year, so Brownstein doesn't do that — he sees 1974 as the year a lot of trends metastasized, but you could just as easily argue for 1972 or 1973 as the height of Left Coast influence.

But Steven Spielberg's "Jaws" came out in 1975, and that signaled the end of that brief creative moviemaking window as Hollywood began to understand the wisdom of the blockbuster. It made more economic sense to appeal to the lowest common denominator with a big thrill ride of a movie than to bet on messy auteurs selling specific visions.

And after a short time in Geffen's stable, during which he released the unremarkable "Planet Waves," Bob Dylan returned to Columbia Records in 1975, releasing arguably the best record of his career: "Blood on the Tracks," recorded in New York and Minneapolis. (Geffen did get "Before the Flood," the magnificent live album Dylan recorded with The Band while on tour in 1974, out of the arrangement.)

Brownstein, a political analyst for The Atlantic and CNN who also worked for The Los Angeles Times for many years, also cites the election of future Linda Ronstadt boyfriend Jerry Brown to the governorship of California in 1974 as evidence of the rise of L.A. cultural hegemony.

It's an interesting idea, and Brownstein is very good at describing the odd political culture of southern California, which served as an incubator for extremism and a certain kind of Orange County Republicanism that Jackson Browne — one of several key interviews Brownstein conducted — found stifling.

One of the book's best chapters (each of its 12 chapters corresponds to a month, riffing off of some significant event) interrogates the political awakening of Jane Fonda through the lens of her marriage to activist Tom Hayden, the former '60s radical who came around to trying to change the system from within.

While the political revolution that at times seemed inevitable in the late '60s never came, the culture at large did absorb the permissive attitudes the hippies held about sex and drugs. And that sensibility continues to inform our art and politics. Brownstein is at his best when writing about the friction points between culture and politics.

In retrospect, it's not hard to see why so many creative people gathered in Los Angeles in the early '70s; it had the advantage of climate and infrastructure. The movie business was already established there.

As native New Yorker Neil Diamond sang in one of his more personal songs "I Am ... I Said": L.A.'s fine, the sun shines most the time/And the feeling is "lay back"/Palm trees grow and rents are low ...

In the next breath, Diamond allows he's thinking of making his way back.

There has always been something provisional about Los Angeles, a certain unrootedness to the place that's perhaps appropriate to a town built on stolen water and outsized egos. It is both the loneliest American city and the cruelest. And, as Brownstein points out, it had its magic hour.