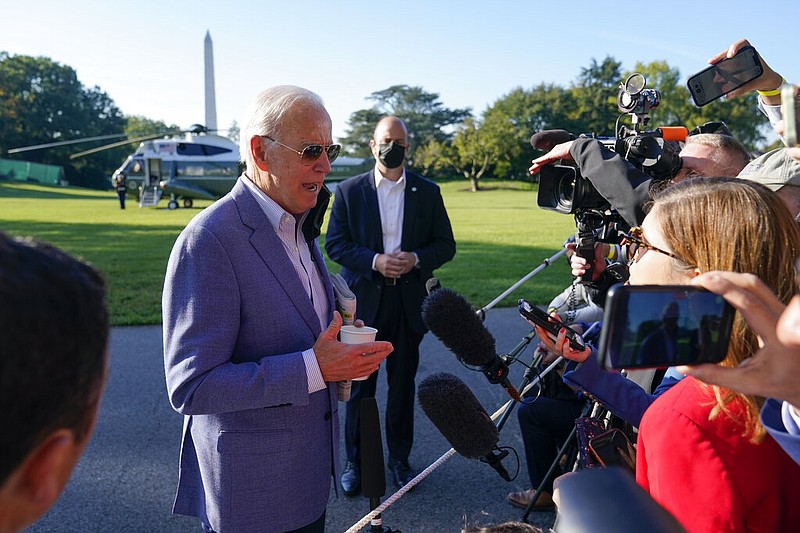 President Joe Biden speaks with members of the press before boarding Marine One on the South Lawn of the White House in Washington on Saturday, Oct. 2, 2021. Biden is spending the weekend at his home in Delaware. (AP/Patrick Semansky)

WASHINGTON -- The Senate met briefly Saturday to send to President Joe Biden a bill that would revive key transportation programs that had lapsed two days earlier and bring back nearly 4,000 furloughed workers.

The rare weekend session was necessary because Congress did not address expiring transportation programs when it passed legislation Thursday to avert a government shutdown. Those reauthorizations were included in a $1 trillion bipartisan infrastructure bill that had been scheduled for a vote on the same day but that never came up as congressional Democrats remained divided over the measure.

[Video not showing up above? Click here to watch » arkansasonline.com/103dcbiden/]

Senators approved by unanimous consent a motion from Sen. Ron Wyden, D-Ore. and chairman of the Finance Committee, to extend the expiring transportation programs and end the furloughs of 3,700 workers. The stopgap bill, which the House passed Friday by a vote of 365-51, would extend the programs through Oct. 31.

"Today's extension protects thousands of Department of Transportation employees and will keep important projects on schedule," Rep. Peter DeFazio, D-Ore. and chairman of the Transportation Committee, said Friday. "Now we will continue our work to pass the Build Back Better agenda into law, including a historic investment in America's infrastructure."

While the stopgap measure resolves immediate issues, supporters of the $1 trillion infrastructure bill are leery of the prospect that Congress will opt to repeatedly pass short extensions -- an approach that lawmakers have taken in the past.

Neil Bradley, an executive vice president at the U.S. Chamber of Commerce, said officials already are beginning to develop plans for the coming construction season and need certainty that federal money will be available.

"It is not cost-free to simply kick the can down the road," Bradley told reporters last week.

While the immediate effects were limited, the lapse is "unacceptable," said Jim Tymon, executive director of the American Association of State Highway and Transportation Officials.

"Yesterday's inaction on the Infrastructure Investment and Jobs Act isn't just disappointing -- it lapses our highway, transit, and highway safety programs and halts work on vital transportation infrastructure around the country, which is detrimental to our economy and the quality of life of our communities," Tymon said in a statement Friday, referring to the $1 trillion bill. "We are dealing with very real repercussions."

The Saturday vote capped an intense week at the Capitol, where Democrats tried and failed to advance a major piece of Biden's agenda. The nearly 100-member Congressional Progressive Caucus blocked a vote on the infrastructure bill in the House, seeking leverage to secure passage of a larger $3.5 trillion domestic policy bill that Biden, House Speaker Nancy Pelosi and Senate Majority Leader Charles Schumer had assured the caucus would advance as part of a "two-track" process with the infrastructure bill.

The progressives' stance forced Pelosi to delay a planned vote on the infrastructure bill and ultimately prompted Biden to side with them in saying that there could be no vote on that bill until agreement on the far broader measure had been reached.

In a letter to lawmakers on Saturday, Pelosi urged passage of the infrastructure bill by the end of the month and signaled that Democratic leaders were continuing to negotiate the broader social policy and climate bill with Sens. Joe Manchin of West Virginia and Kyrsten Sinema of Arizona, two Democratic holdouts who are key swing votes needed to pass legislation in the Senate.

"Again, we will and must pass both bills soon," Pelosi wrote. "We have the responsibility and the opportunity to do so."

Pelosi also sought to unwind for colleagues the "two dynamics at work," explaining why she did not bring the bill to a vote despite having told party moderates that she would do so.

She mentioned the commitment to other lawmakers -- progressives -- that she would not hold that vote until there was "consensus" of support "from all stakeholders in the House and the Senate" on a top-line cost and the policies contained in the bigger part of Biden's economic agenda.

That framework originally had a $3.5 trillion price tag. Instead, hesitant moderates got backing from Biden on Friday to shrink that measure.

Pelosi indicated that the infrastructure bill would have been defeated if she had brought it to the floor.

Sinema released a statement Saturday condemning the delay of the vote on infrastructure, calling it a "failure" and "deeply disappointing for communities across our country."

Biden on Saturday acknowledged frustrations as Democrats struggle to rescue the two economic measures after frantic negotiations failed to produce a deal.

"Everybody's frustrated; it's part of being in government, being frustrated," Biden told reporters before leaving the White House for a weekend stay at his home in Wilmington, Del. He pledged to "work like hell" to get the two pillars of his domestic agenda passed into law, but he refrained from laying out a new deadline.

The president had gone to Capitol Hill on Friday for a private meeting with House Democrats that was partly a morale booster for the disjointed caucus of lawmakers. According to lawmakers in the room, he discussed a $1.9 trillion to $2 trillion-plus price tag for the larger package that would expand the country's social safety net.

The White House and its allies in Congress are prepared for protracted negotiations. Biden said he would soon travel around the country to promote the legislation, and he acknowledged concerns that the talk in Washington had become too focused on the trillions of dollars in new spending and taxes in the bill.

He pledged to do more to educate the public about the plan's new and expanded programs, which he contended have the support of the vast majority of the electorate.

The president said he believes that the legislation will be signed into law with "plenty of time to change the tax code for people next year."

It's a pivotal time for Biden and the party. His approval ratings have dropped and Democrats are restless, eager to deliver on his campaign promise of rebuilding the country. His ideas go beyond roads and bridges and include delivering dental, vision and hearing care for seniors; providing free prekindergarten; undertaking major efforts to tackle climate change; and making other investments that would touch American lives.

With Republicans solidly opposed to Biden's vision, the president and Democrats are reaching for a giant legislative accomplishment on their own -- all to be paid for by rewriting federal balance sheets with tax increases on corporations and the wealthy, those earning more than $400,000 a year.

The White House and Democrats also are focusing on raising the nation's borrowing limit before the United States risks defaulting on its obligations -- a deadline the Treasury Department estimates will be reached no later than Oct. 18. The House has already acted, but Republican senators have indicated they will not provide votes for bipartisan passage and that they want Democrats to go it alone.

"I hope that the Republicans won't be so irresponsible as to refuse to raise the debt limit and to filibuster the debt limit," Biden said Saturday. "That would be totally unconscionable. Never been done before. And so I hope that won't happen."

With Biden appearing to accept that his economic package may need some paring down to win moderates' approval, White House officials are debating whether to drop many cherished priorities or keep a fuller range of initiatives in reduced form, according to five people with knowledge of internal discussions.

White House officials on the National Economic Council, the Domestic Policy Council and the Council of Economic Advisers have begun discussing what policies could be reshaped or jettisoned should Manchin and Sinema insist on trimming as much as $2 trillion from the administration's initial spending proposals, said the people, who spoke on the condition of anonymity to discuss private deliberations.

Manchin has said the package should top out at $1.5 trillion -- a position that would slash the administration's original agenda by more than half.

If constrained to $1.5 trillion, then Democrats could only fully fund a handful of their most important policy priorities. For instance, Democrats would already come close to reaching that number in spending if their plans consisted of just three top priorities -- tackling climate change, creating a national paid-leave program and extending a tax benefit that alleviates child poverty.

Together, those three initiatives would represent a substantial expansion of the American welfare state as well as a significant step toward Biden's goals for combating climate change. But a package that contained only those initiatives would jettison an enormous number of priorities that many Democrats campaigned on, including universal prekindergarten, free child care, more affordable housing, and an expansion of government-funded health care.

The choices are stark: Should tackling rising rates of homelessness be dropped in favor of confronting climate change? Should Democrats prioritize senior citizens over the poor? Is it more important to reduce the cost of child care or the cost of a school lunch?

Democrats' health care goals alone could cost about $750 billion if extended over the next decade. Health care was a key plank for Democrats in both the 2018 and 2020 campaigns, and failing to meaningfully address the issue could lead to blowback from voters in future elections.

While many senior Democrats are urging Biden to choose a handful of programs and execute them well, this option is complicated by a lack of consensus about which priorities should prevail. Meanwhile, no lawmaker wants to see his or her favored program cut entirely from the legislation.

But keeping a larger number of policy initiatives also would entail difficult trade-offs to bring down the overall price of the package. Programs would have to be made temporary or sharp limits would have to be placed on who qualifies.

"The president and his team have to make some very tough decisions here. There will have to be some real serious cuts to key priorities," said Jim Manley, who served as an aide to former Senate Majority Leader Harry Reid, D-Nev. "The cuts required are going to be really ugly and really painful."

In an interview, former Obama administration economist Jason Furman argued that "if Congress needs to shrink the legislation, it is much better to drop the lowest-priority programs than to try to do everything."

"As tempting as it may be to sunset programs in the hopes they are extended in the future," Furman said, "most of these programs are not popular enough to make extension inevitable or even likely."

Another economist, speaking on condition of anonymity to reflect private conversations, said she had relayed similar advice to the White House.

"What we're telling them is: You start to whittle down the top-line number, and suddenly you're not doing any one particular thing well," this economist said. "You really don't want to roll out a huge number of programs all poorly."

Information for this article was contributed by Luke Broadwater of The New York Times; by Ian Duncan, Tony Romm and Jeff Stein of The Washington Post; by Billy House of Bloomberg News (TNS); and by Lisa Mascaro and Zeke Miller of The Associated Press.