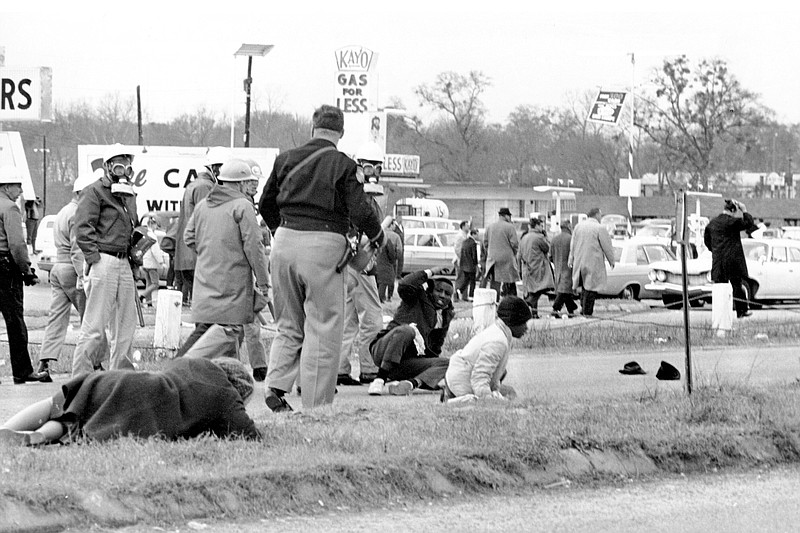 FILE - In this March 7, 1965, file photo, civil rights demonstrators struggle on the ground as state troopers break up a march in Selma, Ala. The world knows the names of John Lewis and a few more of the voting rights demonstrators who walked across Selma's Edmund Pettus Bridge in 1965 only to be attacked by Alabama state troopers on a day that came to be called &#x201c;Bloody Sunday.&#x201d; A new project aims to identify more of the hundreds of people who were involved in the protest. (AP Photo/File)

SELMA, Ala. -- The world knows the names of John Lewis and a few more of the voting-rights demonstrators who walked across Selma's Edmund Pettus Bridge in 1965 only to be attacked by Alabama state troopers on a day that came to be called "Bloody Sunday." A new project aims to identify more of the hundreds of people who were involved in the protest.

Auburn University professors Richard Burt and Keith Hebert, working with a group of honors college students, have established a Facebook page where people can look through photographs of March 7, 1965, and identify themselves or others in the black-and-white images.

Online since August, the page is titled "Help us identify the Selma Bloody Sunday Foot Soldiers." It features multiple images of marchers who are labeled with red numerals, and users can add the names of people they recognize in the comments section.

Some have already been identified, and the creators hope more will be as word spreads about the page, particularly in Selma, where the effort is being promoted. A class at Selma High School is helping, with students enlisting relatives to help identify marchers.

The project "highlights the need for additional historical research and documentation for one of the most famous moments in American history," Hebert said.

"By taking a fresh look at Bloody Sunday, our research has revealed rich details about how the march unfolded that prior historians have overlooked. We intend to help those in Selma who want to do more to preserve and interpret the historic landscapes connected to this seminal event," he said.

Lewis, Hosea Williams, Amelia Boynton, Marie Foster and other established activists were at the front of a line of hundreds of marchers when the column crossed the bridge over the Alabama River bound for Montgomery. They were savagely beaten by troopers and members of the Dallas County sheriff's posse; images of the violence helped build support for voting rights across the segregated South.

"Anyone recognize him?" the police in Winter Haven, Fla., asked on Facebook last month.

Photos with the post showed a man walking out of a Walmart without paying for his items after several of his credit cards were declined, police said. Among the items in his cart were boxes of diapers.

"When your card is declined and you try another one with the same result, that is NOT license to just walk out with the items anyway," said the Facebook post, which was later deleted.

The Winter Haven Police Department drew swift criticism for the post from people wondering why the department had gone after a man who had stolen a basic necessity for his children, also pictured in the surveillance photos.

"That's a good father in a hard spot," one Facebook user said. "Have some empathy."

After the incident, the store asked the police not to prosecute the man, according to a department waiver of prosecution. Neither Walmart nor the man responded to requests for comment.

It's possible the man was among the 1 in 3 American families who struggle with diaper need, according to a February 2020 report by the National Diaper Bank Network, which provides diapers for children. Joanne Samuel Goldblum, the network's founder and CEO, said she suspects that figure probably rose during the coronavirus pandemic as diaper prices increased and supply plummeted.

"Diaper need is a topic that's so swept under the rug," she said. "Covid really laid it bare for us."

The pandemic has upended global supply chains and created a run on many products, including diapers. Kimberly-Clark and Procter & Gamble, two of the country's largest diaper manufacturers, increased the prices of baby products this year. A typical package of 100 diapers costs $30 to $50 from most online retailers.

Diaper banks across the country have reported recent surges in families who couldn't afford diapers. WestSide Baby, which is based in Seattle, distributed 2.4 million diapers last year, up 60% from 1.5 million in 2019, said Sarah Cody Roth, executive director. The organization is on track this year to meet or exceed that total, she said.