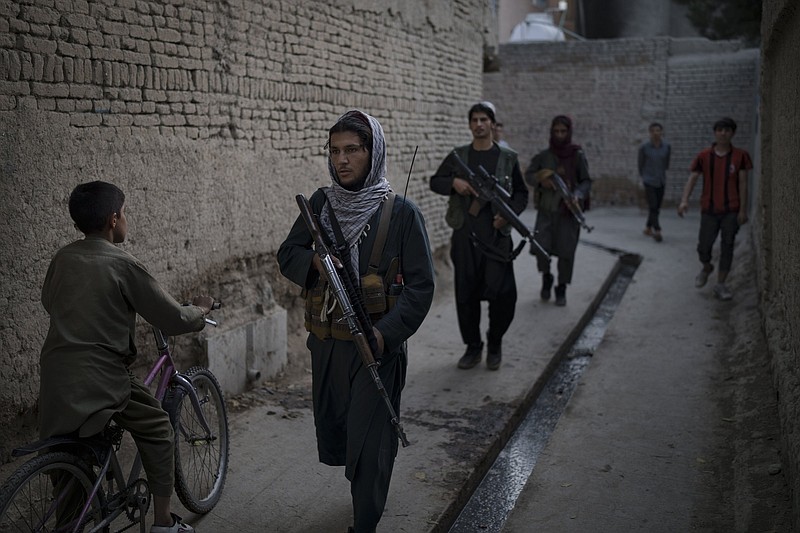 Taliban fighters patrol a neighborhood in search for a man accused in a stabbing incident, in Kabul, Afghanistan, Sunday, Sept. 12, 2021. The Taliban are promising a return of some of their harsh punishments that made them notorious. That has many Afghans afraid, but some also say they are giving the Taliban a chance if it means greater stability and fewer corrupt officials reaching into their pockets. (AP Photo/Felipe Dana)

KABUL, Afghanistan -- It wasn't 7 a.m. yet and already the line at the police station gates was long, with men bringing their complaints and demands for justice to Afghanistan's new Taliban rulers.

They immediately found something new: The Taliban fighters who are now the policemen don't demand bribes as police officers did under the U.S-backed government of the past 20 years.

"Before, everyone was stealing our money," said Hajj Ahmad Khan, who was among those in line at the Kabul District 8 police station on a recent day. "Everywhere in our villages and in government offices, everyone had their hands out," he said.

Many Afghans fear the harsh ways of the Taliban, their hard-line ideology or their severe restrictions of women's freedoms. But the movement does bring a reputation for not being corrupt, a stark contrast to the government it ousted, which was notoriously rife with bribery, embezzlement and graft.

Even residents who shudder at the potential return of punishments -- such as chopping off the hands of thieves -- say some security has returned to Kabul since the Taliban swept in on Aug. 15. Under the previous government, gangs of thieves had driven most people off the streets by dark. Several roads between cities are again open and have even been given the green light for travel by some international aid organizations.

During their last time in power in the late 1990s, the Taliban offered a tradeoff: They brought a stability that Afghans desperately sought and eliminated corruption, but they also imposed their harsh interpretation of Islamic law. That included punishments like the hand amputations, executions of murderers with a single bullet to the head, most often by a relative of the murder victim, and all carried out in public. Religious police beat men for trimming their beards or for not attending prayers.

In the past week, the Taliban arrested 85 alleged criminals, some accused of petty crimes and others of murder, kidnapping or robbery, said Noor Ahmad Rabbani of the Taliban's anti-crime department.

The Taliban say they will bring back their previous punishments. The only question is whether they will carry them out publicly, said Mullah Nooruddin Turabi, former justice minister and currently in charge of prisons.

Some punishments have already reappeared. The bodies of four men were hung from cranes in the center of the city of Herat after they were killed by the Taliban while allegedly attempting a kidnapping. On at least two occasions in Kabul, petty thieves were paraded around the streets to shame them -- handcuffed, with their faces painted or with stale bread stuffed in their mouths.

So far, the Taliban appear to have brought relief from corruption. Before the takeover in August, people had to pay bribes simply to settle a utility bill. Rampant fraud in the military was one reason it collapsed so quickly in the face of the advancing Taliban. Despite the overt graft, the U.S. and Europe poured billions of dollars into the government with little oversight.

Outside the police station gates, the line was getting longer.

Khan, 60, had come from eastern Khost province to seek Taliban help in collecting an outstanding loan. He said he supported Taliban punishments like amputations, though not for petty thieves.

He said they have brought some security "because they treat the criminal under Islamic law."

A school principal, who didn't want to give his name fearing repercussions, had come to the police station to complain about parents who are months behind on school fees.

He said he wanted to give Taliban rule a chance. Under the previous government, he was charged bribes each time he went to the police to complain about delinquent payments.

"America invested lots of money in Afghanistan, but it was a mafia that was running the country," he said.

Meanwhile, Afghan refugees will soon be arriving in the U.S. again after a measles vaccination campaign because of a small outbreak that caused a three-week pause in evacuations, officials said Monday.

Authorities have administered the vaccination to about 49,000 evacuees staying on American military bases as well as to those still at transit points in Europe and the Middle East, according to the Department of Homeland Security.

The outbreak of measles, detected in 24 people, had put on hold one of the largest refugee resettlement efforts in U.S. history, dubbed Operation Allies Welcome, and stranded about 15,000 people at overseas transit points.

Everyone coming from Afghanistan in the evacuation is also tested for covid-19, and about 84% of the refugees in the U.S. and at overseas transit points have now been vaccinated for the virus, officials said.

Separately, more than 100 students, alumni and faculty members of the Afghanistan National Institute of Music have been flown out of Kabul on their way to Portugal, where the government has agreed to grant them asylum, the institute's director said Monday.

They were on board a flight carrying 235 people out of Kabul's international airport to Qatar on Sunday. It was the largest airlift of Afghan nationals since the Taliban seized Afghanistan.

"You cannot imagine how happy I am. Yesterday I was crying for hours," the school's founder and director, Ahmad Sarmast, said from his home in Melbourne, Australia.

Information for this article was contributed by Samya Kullab, Ben Fox and Zeina Karam of The Associated Press.