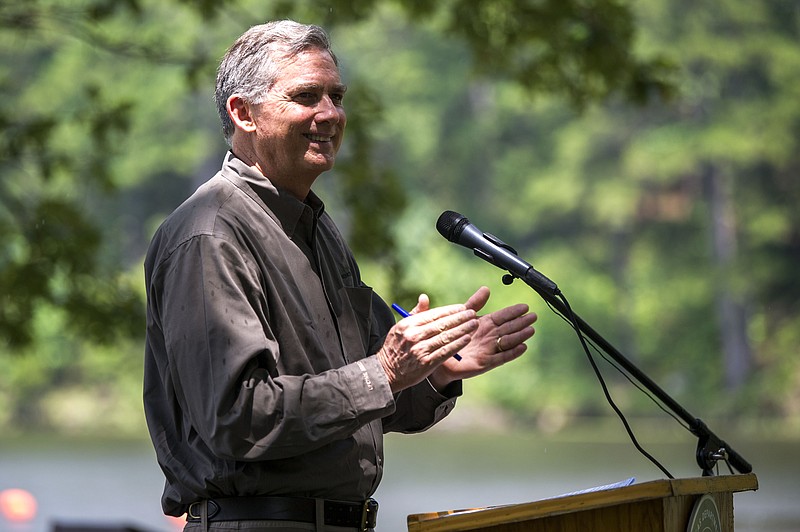 FILE - Congressman French Hill thanks the Division of Arkansas State Parks for their work during a press conference at Lake Sylvia on Friday, July 23, 2021. (Arkansas Democrat-Gazette/Stephen Swofford)

One of the most notable things for some participants in Monday's meeting for Historically Black Colleges and Universities at Philander Smith College was the absence of some critical role players.

Congressional members, HBCU administrators, corporate representatives, philanthropists, alumni and students attended the second Arkansas HBCU Summit, but as some pointed out, representatives from some of Arkansas' biggest companies were not there for discussions about donations and job opportunities for HBCU students.

Historically Black colleges and universities have long tried to get by on much-smaller endowments compared with those of their predominately white counterparts -- a factor where the heads of Arkansas' historically Black institutions know they have a lot of catching up to do.

While Congress has provided funding and relief in recent years, some on Monday expressed disappointment with the lack of private donations from major companies.

The Rev. Cory Anderson, executive vice president of the Winthrop Rockefeller Foundation, also spoke about the need to level the endowment gap between historically black schools and other universities in Arkansas.

"If we put up a bar graph that said these are the endowments of all the four-year institutions in Arkansas, it would be easy to pick out the HBCUs from the other schools, right?" Anderson said.

Arkansas' historically black institutions have struggled lately. In January, Philander Smith College laid off 22 faculty and staff members because of a drop in enrollment.

O. Jerome Green, president of Shorter College, spoke of the junior college's struggles to get its accreditation back after losing it in 1997 because of financial problems.

However, the private sector did make a showing at the summit.

Kory Hawkins, the university relations lead for Microsoft, participated in a panel discussion on how corporate America can better connect with historically black institutions.

U.S. Rep. French Hill, who emceed Monday's panel discussion, summed up one of the meeting's main takeaways as "trying to leverage some of these additional federal investment dollars with the private sector."

Some of that recent investment came in 2019, when Congress passed $250 million in permanent funding for historically Black institutions. In March 2020, as part of the CARES Act, Congress included more than $1 billion in debt forgiveness for the schools.

North Carolina Democratic Rep. Alma Adams also spoke about the value of historically Black institutions, saying funding from the private sector is key. Adams and Hill are chair and vice-chair of the Congressional HBCU Caucus.

Historically Black institutions also factor into the politics that have been driving recent negotiations between moderate and progressive Democrats over a $3.5 trillion budget reconciliation bill.

One version of the bill would include $55 billion for Historically Black Colleges and Universities and minority-serving institutions. However, the funding is less than what some supporters expected, leading Adams to suggest she may not support the legislation.

With Democrats' slim majority in Congress and few votes to spare, Adams wouldn't commit Monday to voting for the reconciliation bill, a key part of President Joe Biden's post-covid-19 agenda.

Despite funding for historically Black institutions in the reconciliation bill, Hill, like the rest of his Republican colleagues, remains opposed to it.

Instead, Hill pointed to the previous funding Congress passed for such institutions and a bipartisan bill, the IGNITE HBCU Excellence Act, to provide more grant funding for infrastructure improvements. Hill is a co-sponsor of the act.