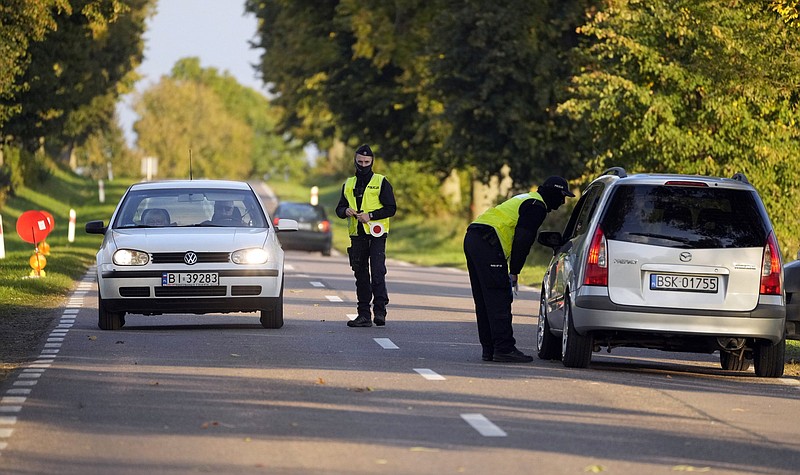 Polish police officers stop cars going in and out of an area along the border with Belarus, where a state of emergency is in place, in Krynki, Poland, Wednesday Sept. 29, 2021. European Union members Poland and Lithuania are struggling to cope with an unusually high number of migrants, most from Iraq and Afghanistan, arriving at their borders with Belarus in recent months. Poland has deployed troops and declared a state of emergency, and accuses Belarus of waging a &quot;hybrid war&quot; against the EU. (AP Photo/Czarek Sokolowski)

WARSAW, Poland -- Poland's influential Catholic Church appealed Monday for humanitarian assistance for migrants from Iraq, Syria and elsewhere who have been seeking to reach Europe by crossing from Belarus into Poland.

Archbishop Stanislaw Gadecki, the president of the Polish Bishops' Conference, called for permission to launch humanitarian corridors in order to control the relocation of refugees and put an end to a chaotic migration happening "at the hands of gangs of smugglers."

Poland has responded to the large-scale migration with a tough approach, refusing to let migrants apply for asylum and pushing some back across the border into Belarus. Those policies violate international law, but the Polish government argues that it must protect the nation's borders and security in the face of a "hybrid-war" attack from Belarus.

People have been getting trapped at the border, suffering from thirst, hunger and exhaustion. There are reports of several deaths from exposure.

"The right and duty to defend the state borders can be reconciled with bringing help to people who find themselves in dramatic situations," Gadecki wrote in his appeal.

Poland's right-wing government accuses Belarus of facilitating the large-scale migration into Poland to create instability in the European Union. Poland and other EU countries -- particularly Lithuania and Latvia, which also border Belarus and have seen migrants enter their countries -- believe it is revenge for EU sanctions against the government of authoritarian President Alexander Lukashenko.

Top government officials have portrayed some of the migrants as dangerous criminals, terrorists or people with sexual perversions. Meanwhile, those Poles who criticize the government's approach have been accused of siding with Lukashenko against their own nation.

Gadecki said the authorities have the duty to detect potential threats from people crossing the country's borders but that they shouldn't stigmatize newcomers by making harmful generalizations.

He recalled the Christian duty to help migrants and refugees.

He also expressed his gratitude for the help given to Afghans who were evacuated by the Polish authorities as the Taliban seized control of Kabul.