Elizabeth Eckford celebrates 80th birthday where she made history 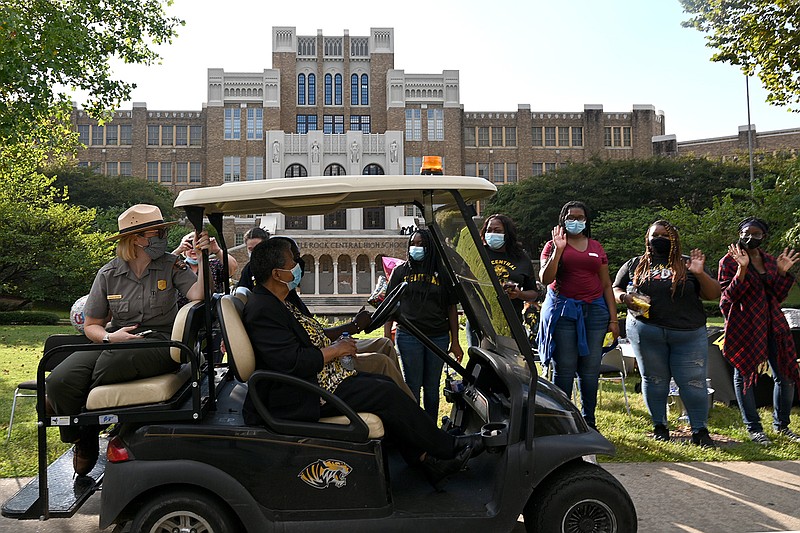 About a dozen Central High School students lined the sidewalk in front of the school Monday afternoon with handwritten signs to celebrate the 80th birthday of Elizabeth Eckford, one of the Little Rock Nine.

The crowd was kept small, and students were reminded not to clap or make loud noises, conscious that in 1957, Eckford was met on that same road by a loud mob of protesters who were angry that Eckford and a group of Black students were going to attend school with their white children.

Eckford said she has not celebrated a birthday in a long, long time.

The students, who are members of the Civil Rights Memory Project, wanted to hold a drive-by birthday party for Eckford.

A park ranger drove Eckford in a golf cart from the Central High Museum down South Park Street, where the students were waiting to greet her.

Central High became internationally known in 1957 during the desegregation crisis. Eckford and eight other Black students were barred from entering the school by Arkansas National Guard members who had been activated, despite a court-approved desegregation plan.

[Video not showing up above? Click here to watch » https://www.youtube.com/watch?v=9nc9w-s93Hw]

Weeks later, the students were allowed to return to the school where they were met by a violent crowd. President Dwight Eisenhower federalized the Guard and sent members of the 101st Airborne Division troops the following day to protect the students, who attended the school the remainder of the year under federal protection.

Eckford's calm in the face of screaming protesters – captured in several historic photos – has made her the face of the civil rights crisis in history textbooks across the U.S.

Eckford previously told the Arkansas Democrat-Gazette, "It's very ironic to me that people describe this [her stance] as strength. I was frozen. I had to get away," Eckford says.

She said there have been times when she came upon the photo unaware and "it really knocks me back. It breaks me apart." And there are other times, she feels nothing.

"But I never felt good about that picture," she said.

Eckford on Monday said the most common thing that students ask her is about the famous photo.

"They talk about it as strength," she said, "But I've never considered myself a strong person."

Central High Principal Nancy Rousseau said, "We're so proud of her for telling her story now,"

"It's amazing, the kids love her – she's accepted and appreciated for her outreach, which wasn't always the case," said Rousseau, who has been an assistant principal since 1991 and principal since 2002.

As Eckford arrived in front of the school on Monday, she told Rousseau, "See-- I've got my black and gold," referring to Central's school colors.

Students and guests, including Mike Poore, superintendent of the Little Rock School District, took turns taking pictures with Eckford and telling her stories.

The students gifted Eckford children's books, including a copy of Eckford's book, "The Worst First Day," to donate to Stephens Elementary School in Little Rock, where she attended elementary school.

"It's an honor to be here to celebrate with her, because she did so much for our school," said Destiny Logan, a senior at Central.

"None of this would be here without her. She's such an inspiration," said Amelia Rios, another senior.

"It was the best birthday I had in a long, long time," Eckford said.

Print Headline: Elizabeth Eckford celebrates 80th where she made history