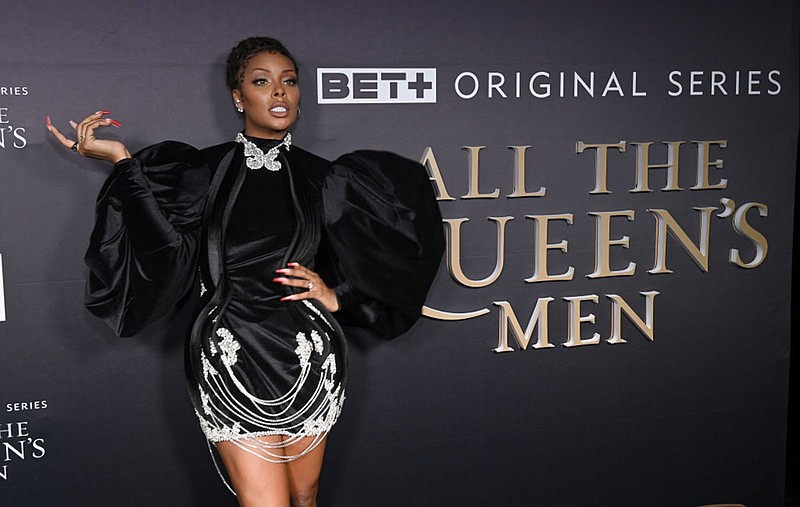 Eva Marcille attends the premiere screening for the new BET+ and Tyler Perry Studios scripted series “All the Queen’s Men” in Atlanta. The series was filmed in a covid bubble, Marcille says. “We did 10 episodes in two bubbles. Each one lasted two months. We did not go home. There was no driving to set. You were in character for four months.” (Paras Griffin/Getty Images for BET/TNS)

Eva Marcille's career started in reality TV 17 years ago, as a memorably outspoken winner of the third season of "America's Next Top Model."

After working as a full-time model, she segued into acting, nabbing a regular spot on "The Young and the Restless." More recently, she landed two seasons on "The Real Housewives of Atlanta" after moving to the city and marrying lawyer Michael Sterling.

Now Marcille has received what most actors thirst for: a lead role as a complicated character that allows her to carry an entire show. Marilyn "Madam" Deville is the tough-as-nails owner of Eden, an Atlanta club featuring male strippers in a new BET+ series called "All the Queen's Men."

Madam possesses the swagger of a male mob boss, a gender twist where she makes the decisions and the men cower.

"The men are the eye candy," Marcille said. "We objectify them and the women are the bosses, the masterminds, the ones making the moves. Her bodyguard isn't some sprawling linebacker. It's a woman, which is awesome!"

Before the end of the first episode, Madam wields a gun ― twice ― and confronts a man who owes her money by punching him square in the face wearing brass knuckles. At the same time, she shows tenderness toward a nephew fresh out of prison, her dad suffering from dementia, her female employees and many of the male exotic dancers themselves.

And while Tyler Perry is an executive producer, this is a project in which he did not write the series. Credit goes to Christian Keyes, who also wrote the original book "Ladies Night," on which the series is based.

"I interviewed dozens of people who worked and ran male revues," said Keyes, who is also an actor with credits including Bounce TV's "Saints and Sinners" and the soap "The Young and the Restless." "I interviewed dancers. I even did an amateur night on a dare a long long time ago before I wrote the book. I made about $700 in a half hour!"

While Marcille might call the exotic dancers "eye candy," Keyes said he tried to humanize them and provide reasons why they do what they do. In fact, four of the five actors playing exotic dancers with nicknames like Doc, Midnight and Babyface have a background in male stripping.

And while there is a glint of that "Magic Mike" fun during the performances, Keyes said, "we give this show a lot more grit and soul and trap music. Dozens of beautiful Black characters. A lot more melanin!"

Here are highlights from a recent interview with Marcille:

So who is Madam? "The show starts with Marilyn picking up her nephew from jail. He is my heart. He is the only son I never had. She never had her own kids. My men are my kids. I take care of them. My job is protector and provider and problem solver. And though she has a big heart and can be extremely giving, she is not soft. She had a lot heartache and pain as a young girl and she's had to figure out how to maneuver through life without the things she lost. She had nobody to protect her. She had to protect herself."

On Tyler Perry giving her this opportunity: "My thoughts were, 'Do not let him down! Land his plane!' He gave me an opportunity 12, 13 years ago on 'House of Payne.' He gave me a good start. I was able to be funny and endearing. I was able to show him some range while still a young actor. Now I'm a mom with three children. I've lived more life. This role was something he knew I could do. It was just a matter of me believing in myself. I studied. I worked with Lynn Whitfield. She is the godmother of everything fabulous. The first person I saw in this role was Diahann Carroll. Those are strong women. I was honored when Tyler took the time to call me directly. He could have sent it through his office."

In the covid bubble twice: "We did 10 episodes in two bubbles. Each one lasted two months. We did not go home. There was no driving to set. You were in character for four months."

Being away from family: "Thank God for Facetime. I sent money to my best friend through a cash app and she did all my Christmas shopping for me. My husband, my mom, my nanny all watched the kids. It was a village that supported me. I really clung to that."

The show's use of male nudity: "It's not gratuitous. But with the show streaming, we were allowed to be authentic to the world of exotic dancing."

On leaving "Real Housewives of Atlanta" last year: "It was the beginning of a really sad and critical time in America. Between elections and covid and Black Lives Matter, I had other jobs on radio [with the 'Rickey Smiley Morning Show'] and my own podcast ['The Undressing Room Podcast'] that allowed me to not use the glitz and glamour and smoke and mirrors of TV. It was life. It was really difficult to jump back into 'Housewives.' I wanted to focus on how I could affect change with the platforms I was on."

On doing radio: "I love radio so much. It's the one place outside of Instagram you get to see the real me. I talk to all moms, single moms. I talk relationships and co-parenting, women's hygiene. It's that connectivity. It's that relatability."

All 10 episodes of "All the Queen's Men" are available to stream on BET+.