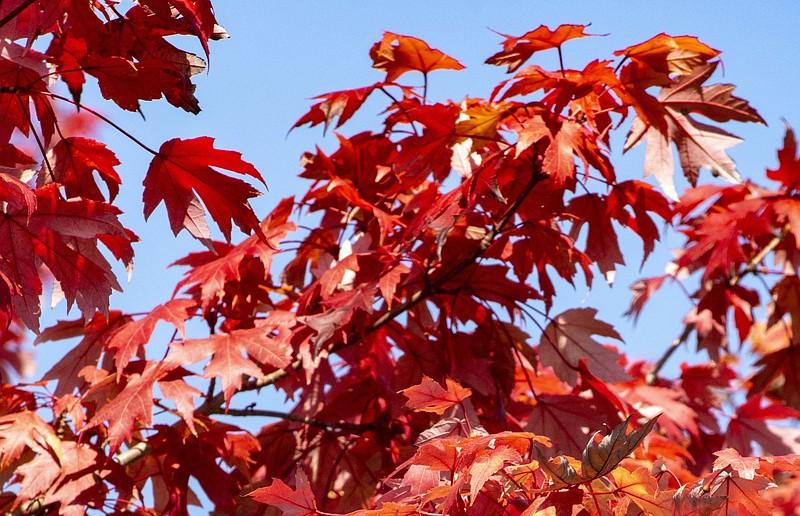 Fall colors are running a bit behind this year in Arkansas, thanks to the heat and drought conditions. But tourism officials say be patient and they will come. (Arkansas-Democrat Gazette/Cary Jenkins)

Forecasting peak brilliance for those autumn leaves of red and gold can be almost as much of a stab as picking a winning set of lottery numbers.

For regions of Arkansas, moving north to south, the peak periods arrive some time in October through parts of November. The website (arkansas.com) of the Arkansas Department of Parks, Heritage & Tourism posts an updated forecast each Thursday.

The latest weekly posting is upbeat as tourism messages generally are. But it indicates that patience is in order, with the pacing of the colors running late:

"Week two of waiting patiently for the fall colors to arrive is here, although many of us have been waiting much longer than that. While there are still a few anomalies here and there, the bright fall foliage one expects is taking its time with the majority of the state still dressed in lush shades of green. Bide your time. The trees will show their colors soon enough."

Whether the tardy foliage turns out to be vivid or tepid remains in question. In a typical autumn, the Ozark Mountains in the north see the first tones in early October. A week or so later, the Arkansas River Valley starts to turn. The southern part of the state sees its hues by mid-November.

Some fall-foliage fans have their favorite routes for viewing the annual palette of maples, hickories, oaks and other deciduous species. Among prime itineraries are the following:

◼️ Boston Mountains Scenic Loop (U.S. 71/I-49): The less traveled half of this fall-color loop, U.S. 71 was a main route from the south to Fayetteville before the completion of I-49. Now rather lightly traveled, it offers views of autumn hues along with the occasional craft shop or mountaintop lodging. More scenic than the average interstate highway, I-49 includes several high-span bridges from which views are vast of changing oak and hickory forests.

◼️ Ozark Highlands Scenic Byway (Arkansas 21): Passing through a rugged stretch of the forested Boston Mountains, this is a gorgeous drive to view changing fall hues. Counterpoints to the colorful foliage are five recreational waterways: the White, Buffalo, Kings, Mulberry and Big Piney. The route also is favored by motorcyclists for its twisting sections amid the splendid scenery.

◼️ Pig Trail Scenic Byway (Arkansas 16 and 23): This drive boasts a name as colorful as the autumn colors, along with enough twists and turns to keep driving speeds slow enough for comfortable viewing. Small communities along the way provide a change of pace before the route heads north through the Ozark Mountains.

◼️ Mount Magazine Scenic Byway (Arkansas 309): There's an exotic flavor to the names of towns near each end of this foliage-rich route in Ozark National Forest — Havana in the south to Paris in the north. At Mount Magazine State Park, a hike of 1.5 miles takes visitors to the top of Signal Hill, the state's highest point at 2,753 feet above sea level. From this aerie, fall foliage spreads for many miles in all directions.

◼️ Talimena National Scenic Byway (Arkansas 88): Mena is the eastern terminus of this two-state route that continues into Oklahoma. The drive winds for 54 miles along the crests of Rich Mountain and Winding Star Mountain in Ouachita National Forest. The autumn colors enrich a route that is a scenic pleasure any time of year.