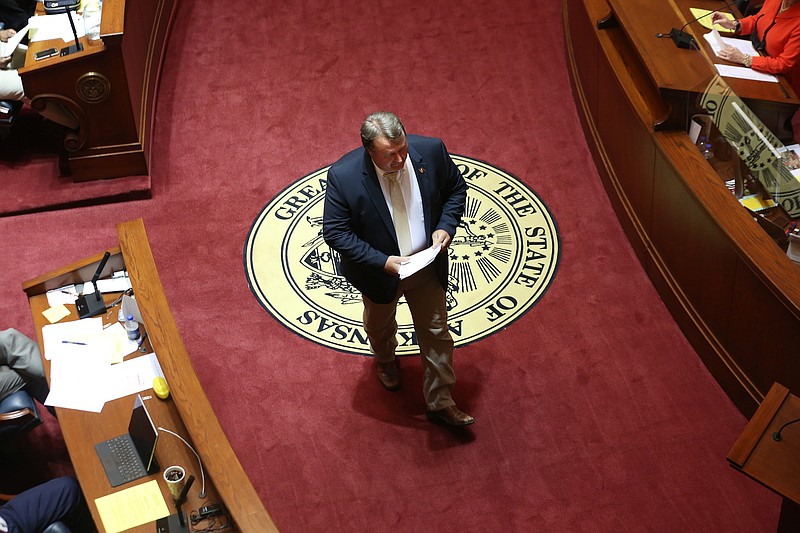 Sen. Blake Johnson, R-Corning, walks across the Senate floor to present SB731, to establish a right of privacy concerning Covid-19 vaccinations during the Senate session on Monday, Sept. Oct. 4, 2021, at the state Capitol in Little Rock. More photos at www.arkansasonline.com/105session/.(Arkansas Democrat-Gazette/Thomas Metthe)

The Arkansas Senate on Monday passed three bills targeting employer-mandated coronavirus vaccinations, as a contentious debate over pandemic-related measures overshadowed congressional redistricting once again on the 114th day of the 2021 regular session.

Senate Bill 739 by Sen. Kim Hammer, R-Benton, would require employers that mandate vaccinations to provide an exemption process for workers, including requiring them to produce a negative antigen test once a week or proof of immunity including the presence of antibodies twice a year.

Senate Bill 730 by Sen. Trent Garner, R-El Dorado, would make people who leave their jobs because of their refusal to be vaccinated against covid-19 eligible to receive unemployment benefits.

Senate Bill 732 by Sen. Blake Johnson, R-Corning, would prohibit a business, person or any other legal or commercial entity from coercing someone to receive a vaccination or immunization from covid-19 under certain conditions.

Hammer said he was proposing the legislation in response to a forthcoming mandate from the federal government. President Joe Biden announced last month that he would require employers with more than 100 workers to mandate vaccinations for workers or test them for the virus weekly. That requirement will be enacted through a rule from the Occupational Safety and Health Administration.

"The federal government has put us in this position," Hammer said. "As a result, we as legislators are stepping up to help give our citizens both guidance, input and also in some cases as allowed in this bill, protection."

At one point during the Senate's debate Monday, Hammer indicated he thought it might be better to pass legislation dealing with employer-mandated vaccinations "even under the threat that we may find this is unconstitutional" in order to let Arkansans know where they stand on the issue.

If an employee is terminated due to the employer violating the proposed legislation, the employee may be eligible for unemployment benefits, the bill reads.

Hammer said he had heard from employers who didn't want to mandate vaccinations.

"Some of the businesses that have been approaching me have said, 'Give us an out, provide us a way forward, that we can provide employees who don't want to be vaccinated, coverage,'" he said.

Sen. Jonathan Dismang, R-Searcy, spoke against the bill, arguing that he would have voted for legislation that deals only with the federal mandate affecting businesses with more than 100 employees, but SB379 goes further.

Sen. Joyce Elliott, D-Little Rock, also spoke against the bill, saying she felt compelled to say something on behalf of people, including those who are immunocompromised, who worry they might catch covid-19 from someone who is unvaccinated.

Garner and Sen. Jason Rapert, R-Conway, spoke for the bill. Garner said the Biden administration might not restrict the mandate to businesses employing more than 100 people, and that there are multiple cases where state law has trumped executive orders or agency regulations.

Rapert said it was "absolutely wrong to try to blame somebody here for this pandemic."

"It is not the fault of my neighbor or my friend, an employer somewhere if someone got sick, no more than it is if they get pneumonia or if they get the flu or something else," he said.

In introducing SB730, Garner said there was likely confusion under existing law anyway over whether people terminated solely for not taking the vaccine could access unemployment benefits.

"This just clarifies for thousands of Arkansans that make that choice that they can access those benefits that their labor helped pay for," he said.

Rapert spoke for the bill, voicing support for protecting individual liberty. English said she did not want the Legislature to mislead people into thinking they would be guaranteed unemployment benefits.

"That's the perception that we keep pushing out there, is that all anybody has to do then is they lose their job and can get unemployment. No, they have to go apply and they may or may not be deemed able to get those things, so I just don't want to mislead people," she said.

Sen. Linda Chesterfield, D-Little Rock, said, "Even if you get unemployment, it's not a whole lot."

"To quit your job to be poor makes no sense, because people today cannot live off unemployment," she said.

SB732 initially failed 17-15, falling one vote shy of an 18-member majority, but the vote was expunged and the bill was brought back up later, ultimately passing 21-11. The dissenting votes came from Bledsoe, Chesterfield, Dismang, Eads, Elliott, English, Hendren, Ingram, Leding, Sample and Tucker. Hickey and Teague did not vote.

"This is a very passionate issue, especially for workers in the state of Arkansas," Johnson said. "You can call it whatever you want to, but I'm going to protect workers around the state."

the bill defines "coerce" as the use of physical violence, a threat, intimidation or retaliation, as well as "the conditioning of a private or public benefit, including without limitation employment, promotion, or another employment benefit." Johnson clarified that the bill would not affect the $100 incentives some Arkansas cities including Little Rock and Fayetteville have implemented to encourage residents to get vaccinated.

Coercion of someone to get the vaccine is prohibited if the vaccine may be harmful to them, as attested to by a doctor's note, or if the person objects to the vaccine on religious or philosophical grounds.

The bill would also allow an employee who faces punitive action for requesting the consideration to seek lost wages, which would be reimbursed comparable to the state's unemployment benefits through the American Rescue Plan Act or any other federal funds that may become available.

Hendren asked Johnson if he had seen the memo that American Rescue Plan Act funds are not available for that purpose.

Last week, a consultant the state hired to advise on the use of federal coronavirus relief funds wrote in an email to a state finance department deputy director that despite SB732's language, "the payment of American Rescue Plan funding to employees who suffer economic losses due to failure to either: a.) comply with a request by an employer to take a COVID-19 vaccine or b.) to engage in weekly testing, both employer programs designed to protect their work force and ensure an uninterrupted continuity of business operations, is not an eligible use of American Rescue Plan Act funding."

"What do you tell the people who left their employment thinking they were going to get them?" Hendren asked.

Johnson said American Rescue Plan funds run through 2023 and there "may be possibilities to use those funds at a later date," and that the Legislature often passes unfunded programs.

The bills have headed to the House for consideration.

However, House Speaker Matthew Shepherd, R-El Dorado, ruled that SB730 was improperly introduced under House Concurrent Resolution 1015, which called for an extended recess while lawmakers awaited the delivery of population data from last year's U.S. census that they need to complete their constitutionally mandated task of drawing new maps for the state's congressional districts.

HCR1015 allows the House speaker and the Senate president pro tempore to reconvene the General Assembly at any time to consider overriding vetoes; correct errors and oversights; complete redistricting; and consider legislation related to the pandemic and covid-19 relief funds. There has been disagreement among lawmakers over whether that language allows them to consider bills that deal with the pandemic broadly.

The House will have the opportunity to object to Shepherd's ruling on SB730 when it reconvenes at 11 a.m. today.

Shepherd assigned SB732 and SB739 to the House Committee on Public Health, Welfare and Labor.

Lawmakers took no action on congressional redistricting Monday. Rapert, who chairs the Senate Committee on State Agencies and Governmental Affairs, said English was working on a bill in collaboration with House members, but was adding an amendment, and the committee was "not in a position to be able to move forward on it right now."

"We're reaching the point where we've got to get a map, it's got to be out," Rapert said. "I hope that tomorrow morning at the latest we can say that there's at least some consensus. It's not going to make everybody happy."