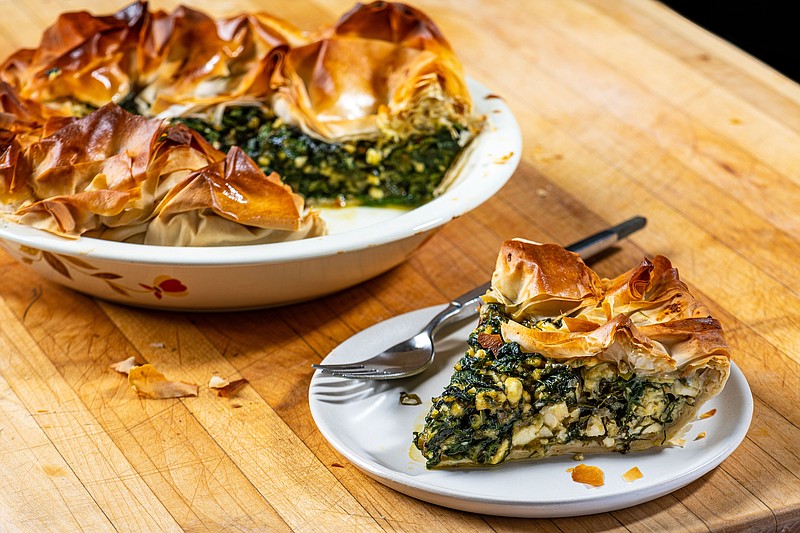 Traditional spanakopita, a Greek feta and spinach pie, is either baked in a large pan and cut into slices or folded into triangles or rectangles or spirals. This version is less fussy, and can be on the table in less time. It relies, in part, on a rustic, open-face approach and breadcrumbs, which help absorb the liquid from freshly cooked spinach and add a fluffy texture to the filling. If you'd prefer to use frozen spinach, make sure it's fully defrosted and very well drained — wring it in a clean kitchen towel to remove excess liquid. This makes a nice brunch dish or main course, perhaps with a grain salad, sliced tomatoes and red onions in a simple vinaigrette or roasted white fish on the side.

In a large skillet over medium-high heat, heat 2 tablespoons of olive oil until shimmering. Add the green onions and cook, stirring occasionally, until they start to brown, about 1 minute. Add the spinach and salt, and cook until the spinach wilts, releases its liquid and dries out, about 5 minutes. Scrape the spinach into a large bowl and let it cool while you prepare the crust.

Position a rack in the middle of the oven and heat to 400 degrees. Brush a 9-inch pie plate with olive oil.

Unroll the phyllo dough onto a clean, dry work surface. Working quickly, gently brush the top sheet of phyllo with some of the oil. There's no need to oil every spot; the oil will spread as you work. Pick up the first three or four sheets of phyllo in a stack and lay them, oil side up, in the pan, allowing one narrow end to cover the bottom of the pan and the other end to climb up the side of the pie plate and hang over the edge.

Repeat, brushing the top of the remaining stack of phyllo sheets, and placing the next three or four sheets into the pan, oil side up. Continue oiling and fitting the oiled phyllo into the pie plate, rotating the pan so that the bottom is covered and a roughly even amount of phyllo is hanging over the circumference of the pie plate. This will not look perfect; if the phyllo tears, patch it and keep going. Once the pie plate is lined, lightly oil its surface and then set aside.

Add the dill or parsley, breadcrumbs, feta and black pepper to the cooled spinach, stirring to combine. Then add the eggs, mixing well to combine. Pour the filling into the phyllo-lined pie plate and, using your fingers, crinkle the phyllo overhang partially over the top of the pie, leaving a 5- to 6-inch diameter in the center exposed. The more crinkled the top is, the nicer it will look once baked, so don't worry about making this look neat.

Bake for 25 to 35 minutes, or until the filling is set and the phyllo is deep brown in places, like the color of an almond skin. Serve hot or at room temperature.