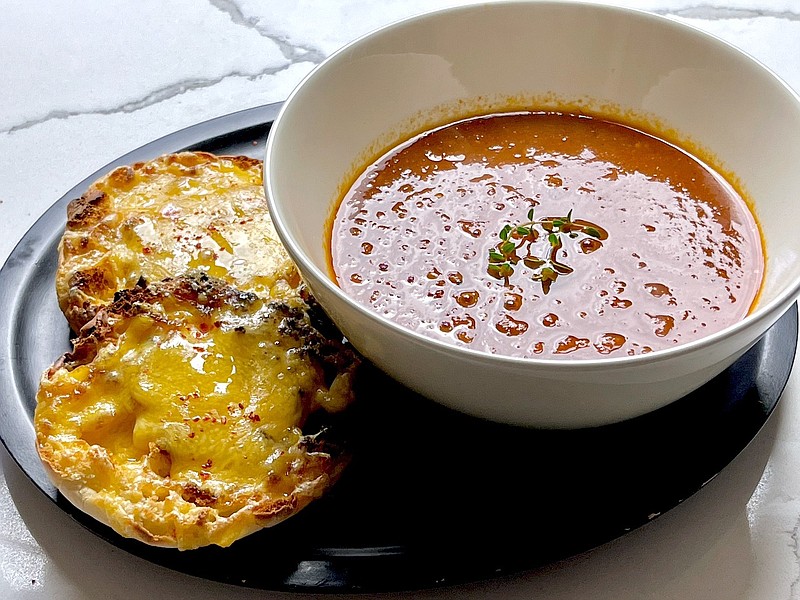 I had to buy the ingredients for this soup twice.

The first time, the tomatoes and garlic never made it into the soup pot. I was so entranced with their aroma I found myself piling them onto toasted English muffins with cheese and thyme and devouring them before I ever pulled the blender out of the cabinet.

That's the gist of this recipe: roast roma tomatoes and a head of garlic and then puree into soup and top with a lid of broiled cheddar toast. Like French onion soup but with tomatoes and cheddar.

But let's be honest: Eating soup with a slab of toasted bread floating on top can be a bit cumbersome. Instead, I prefer to serve the toast on the side, dipping it into the soup as I eat. If dipping is too unrefined, cut the toast into small, bite-size squares after broiling and float them like croutons.

[Video not showing above? Click here to watch: arkansasonline.com/106burner]

Heat oven to 400 degrees. Line a rimmed baking sheet with foil or parchment.

Arrange tomatoes, cut side up, on the prepared baking sheet. Sprinkle generously with salt and pepper. Drizzle tomatoes with olive oil.

Cut the pointed end from the garlic to expose all of the cloves. Place the garlic bulb on a square of foil, drizzle with a bit of olive oil and sprinkle with salt and pepper.

Wrap foil loosely around garlic, crimping the top to seal closed. Place foil packet of garlic on the sheet with the tomatoes. Roast until tomatoes collapse into savory, jammy blobs, about 1 hour. Cool slightly.

Remove the garlic from the foil and squeeze the cloves from the papery skins. (This is where I got sidetracked — the tomatoes and garlic just smelled so good. I spread a clove of garlic on a toasted English muffin half, added some shaved cheddar, two tomato halves and a bit of thyme and dug in. It was delicious.)

Set aside four cloves of the garlic; add the remaining cloves along with the tomatoes and any juices on the pan to a blender or food processor.

Pulse to blend to desired texture; just a few pulses for a rustic, chunky soup longer for a smooth soup.

Transfer mixture to medium pot; strip the leaves from the thyme and add them to the pot along with the red pepper, onion base (if using) and 2 cups vegetable broth. Bring to a boil; reduce and simmer, uncovered, for 25 minutes. Thin with remaining broth, if desired. Season to taste with more salt, black pepper, red pepper or thyme. Keep warm.

Split and toast the English muffins. Place muffin halves on a broiler-safe pan lined with nonstick foil. Spread each muffin half with one of the reserved cloves of roasted garlic; top with shredded cheddar. Broil muffins until cheese is melted and browned. Serve on top of soup or on the side.