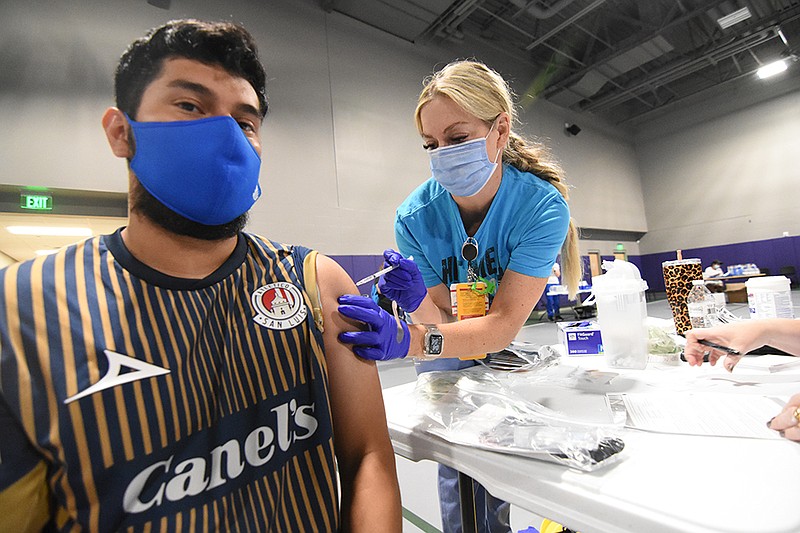 A bill that would exempt employees from federal or employer covid-19 vaccination mandates and authorize unemployment benefits for those fired for refusing to get vaccinated was passed by the Arkansas House on Tuesday, while a nearly identical Senate bill was advanced by a House committee earlier in the day.

House Bill 1977 by Rep. Joshua Bryant, R-Rogers, and Senate Bill 739 by Sen. Kim Hammer, R-Benton, both would require employers that mandate vaccinations to provide an exemption process for workers, including requiring them to produce a negative antigen test once a week or proof of immunity including the presence of antibodies twice a year.

HB1977 passed the House 68-23 and was sent to the Senate late Tuesday afternoon. The emergency clause was adopted, meaning the bill will take effect immediately if enacted.

SB739 was backed by the House Public Health, Welfare and Labor Committee and sent to the full House for consideration.

"The two identical bills are designed to push back against federal vaccine requirements but the net result is more mandates on Arkansas small businesses," Gov. Asa Hutchinson said in a statement. "Employers have the freedom to protect the health of their workplace, and government should not interfere with the employee/employer relationship. We should not fight federal overreach with a solution that causes more problems than it solves."

President Joe Biden announced last month that he would require employers with more than 100 workers to mandate vaccinations for workers or test them for the virus weekly. That requirement will be enacted through a rule from the Occupational Safety and Health Administration.

"That is a hard issue, because conservatives say we're for business, but we're also for personal liberty," Bryant said. "As I said in committee, these two issues are going head to head right now. So then you just have to figure out which side of the fence do I step on, based on information from science that I believe or that I interpret that's been given to me."

The intent of HB1977 is to protect employees from the overreach of authority by the federal government, Bryant said.

"We're giving employers basically the authority of the state to start pushing their overreach into other businesses. The response the employer is giving them is, 'Great, we're going to put you on unpaid leave for 12 months. If you change your mind, call us back and we'll put you on the line,'" Bryant said. "I don't think that was the intent of how to set exemptions. It was to work with the employee to keep them employed while they worked through this."

HB1977 would also make funding available -- from sources including the covid relief funds distributed from the American Rescue Plan Act of 2021 -- to assist employees with the costs of testing related to a vaccine mandate.

Under the bill, if an employee is terminated for refusing to be vaccinated, they "may be eligible" for unemployment benefits or "any other remedy available" to the employee.

Rep. Tippi McCullough, D-Little Rock, said the bill might be unconstitutional and the state would have to "hemorrhage more money" to defend it. She added that people have a choice on where they work.

"I don't really agree with this slippery slope argument regarding personal liberties," McCullough said. "Businesses have a right to drug-test and ask and require a lot of qualifications out of its workforce. There's still a lot of unanswered questions and confusion. Some say government is trying to control people. I say they're trying to protect. It's what public health policy is for."

Rep. Cindy Crawford, R-Fort Smith, invoked Vince Lombardi, coach of the Green Bay Packers, when he walked into the locker room at the start of training camp in 1961 and said, "Gentlemen, this is a football."

"Let's get back to the basics," Crawford said, holding up a booklet with the U.S. Constitution in it, before calling the pandemic mandates and lockdowns a "tool of tyranny."

Rep. Nicole Clowney, D-Fayetteville, said statements that federal law would trump state law are incorrect. She referenced a Biden administration vaccine requirement of staff within all Medicare- and Medicaid-certified facilities.

Rep. Mary Bentley, R-Perryville, told the House that more than 750,000 adverse reactions to the vaccine have been reported to the U.S. Centers for Disease Control.

Rep. Vivian Flowers, D-Pine Bluff, said she and many of her fellow legislators had experienced the virus in different ways, and "some of us have almost died from the virus."

"We are Arkansans and we are supposed to be making the best decisions, especially around this pandemic, for our constituents," Flowers said as she urged legislators not to pass the bill.

Early Tuesday morning, the House Public Health, Welfare and Labor Committee approved SB739 with only a few comments from lawmakers and only one person speaking in opposition.

The Senate passed that bill 21-12 on Monday.

Matt Gilmore, public health policy coordinator with the Arkansas Department of Health, spoke in opposition to the bill, saying that once-a-week testing for exposed individuals is not sufficient to stop the spread of covid-19.

Before the approval of SB739, the committee heard testimony for more than an hour for and against Senate Bill 732, sponsored by Sen. Blake Johnson, R-Corning, before defeating the proposal.

SB732 would have prohibited a business, person or any other legal or commercial entity from coercing someone to get a vaccination or immunization from covid-19 under certain conditions.

Legislators expressed concern that the bill would open the door for possible fines up to $500 for businesses that did not comply.