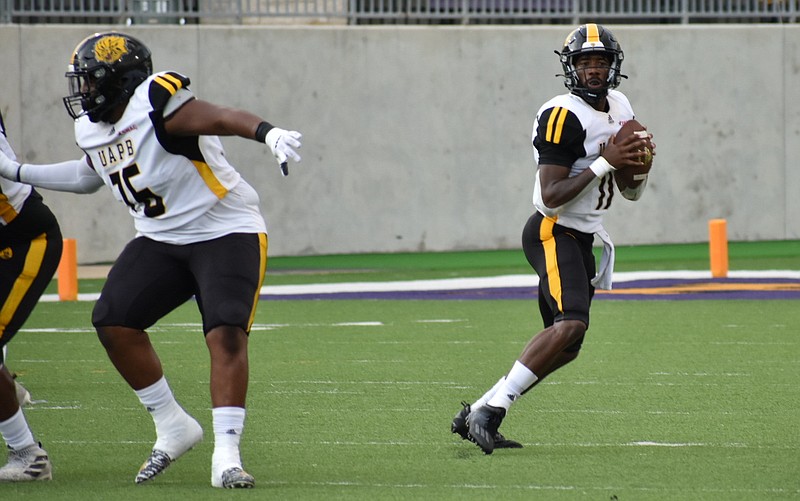 UAPB quarterback Skyler Perry drops back for a pass as offensive lineman Stacey Williams blocks for him during a Sept. 30 loss at Prairie View A&M in Prairie View, Texas. (Pine Bluff Commercial/I.C. Murrell)

Xzavier Vaughn had appeared in two games and thrown a grand total of two passes this season, both incomplete, going into last Thursday's University of Arkansas at Pine Bluff game at Prairie View A&M University.

Josh Wilkes' long catch-and-run with 8:16 left in the first half pulled the Golden Lions within five points of an eventual 27-17 loss to Prairie View. Vaughn said after the game he went in when starter Skyler Perry injured his hand -- Perry came back in the third quarter -- but during this week's Southwestern Athletic Conference coaches' Zoom meeting, Coach Doc Gamble said he didn't know whether Perry was hurt when asked about it.

"He showed up ready to play," Gamble said of the fourth-year starter. "We expect him to play. He don't complain, anyways. He's a tough guy. When he is hurt, he's not going to miss anything. He'll tell you, he did get banged up in previous games, but we make no excuses of it. He didn't make any excuse of it, as well. He gets his normal treatment like everyone else, and he's ready to go."

Vaughn, who also saw playing time in the fourth quarter, went 4 for 8 for 115 yards with an interception that all but sealed the Lions' fate. Perry, an All-SWAC performer, went 9 for 29 for 51 yards.

"We've always been wanting to play Xzavier, even in some of the other games, usually second or third series," Gamble said. "But, too, at that time, to be honest with you, the offense needed a shot in the arm. Skyler was way off, and it's something I hadn't seen from him before. So I thought, maybe he needs to sit and see the game from another view right now and get him settled down, and Xzavier did OK coming in. But that's how we practice. Xzavier gets a ton of reps in practice. Both guys do some things really well. The plan all along was to get Xzavier in on some action, and I thought that was the best time to do it."

It was the second time this fall Perry completed fewer than 50% of his passes, as he struggled to a 13-for-32 clip at the University of Central Arkansas on Sept. 18. Despite coming off a season-high 316 yards against Alcorn State University, Perry is 64 for 131 (48.8%) for 729 yards and two touchdowns through four games.

UAPB's average rushing yards allowed per game ballooned from a league-leading 96.7 yards per game to 144.8 -- still fourth-best -- after giving up 288 to Prairie View. The Lions' pass defense has suffered this season, averaging 291.5 yards per game to rank 11th out of 12 SWAC teams and allowed nine touchdowns.

"It was uncharacteristic of our defense," Gamble said. "We need to be more gap-controlled. We had some guys out of their gaps and where they're supposed to be. Everybody's got to be doing their job, and when you're doing your job, you've got to do it well."

Saturday is homecoming at Alabama State, and the Hornets might try to swarm angrily after losing 28-0 at Florida A&M University on Oct. 2.

"Offensively, we never got off the bus," Hornets Coach Donald Hill-Eley said. "It was a real pathetic showing of offense, and we'll get it fixed, moving on, and make the adjustments. Now, we're in a position where we've got our first loss in the East. We're 1-1 in the East. We're not out of it. The key is still making plays every week."

Quarterback Ryan Nettles ranks eighth in the SWAC in passing yards per game with 604 yards. He has completed 65 of 111 passes and two touchdowns with three interceptions.

Constant lightning stopped the last meeting between the Hornets and Lions on March 27 in Pine Bluff, which was ruled no-contest. Alabama State led 10-3 with 6:12 before halftime.

Former UAPB quarterback Shannon Patrick completed 20 of 40 passes for 237 yards and a touchdown with an interception in Bethune-Cookman University's Sept. 25 loss to Alabama State.