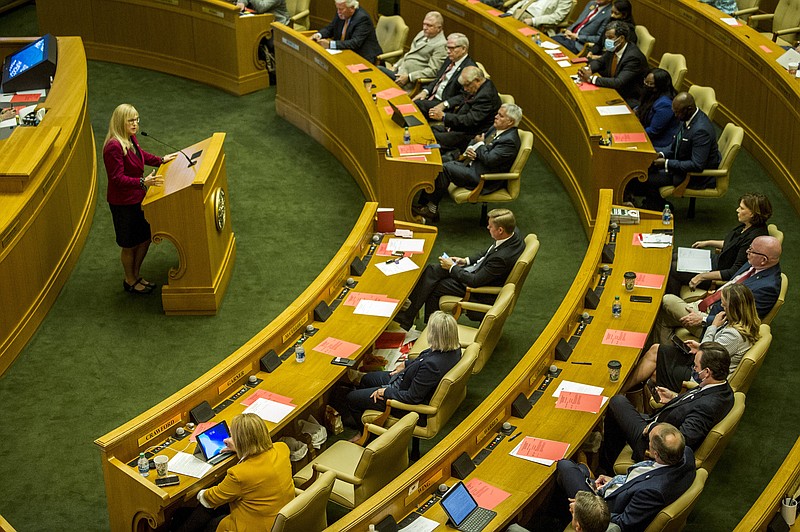 Representative Gayla McKenzie, R-Benton, addresses the House of Representatives after introducing a motion to overturn yesterday's ruling by House Speaker Matthew Shepherd, R-El Dorado, during a meeting of the general assembly on Tuesday, Oct. 5, 2021. The speaker's ruled yesterday that SB730 was improperly introduced under House Concurrent Resolution 1015, which called for an extended recess while lawmakers awaited the delivery of population data from last year's U.S. census that they need to complete their constitutionally mandated task of drawing new maps for the state's congressional districts. See more photos at arkansasonline.com/106bills/..(Arkansas Democrat-Gazette/Stephen Swofford)

Two identical bills aimed at exempting employees from federal or employer covid-19 vaccination mandates cleared the Arkansas Senate and House of Representatives on Wednesday, sending them to the governor for consideration.

What do the identical bills say?

The identical bills passed by the chambers, House Bill 1977 and Senate Bill 739, would require employers that mandate vaccinations to provide an exemption process for workers. Exemption options include requiring employees to produce a negative antigen test once a week or proof of immunity, such as by the presence of antibodies, twice a year.

What about other bills on the vaccine mandate?

A few other bills taking aim at the vaccine mandate have progressed in the Legislature.

Senate Bill 730 by Sen. Trent Garner, R-El Dorado, was passed by the Senate. It would make people who leave their jobs because of their refusal to be vaccinated against covid-19 eligible to receive unemployment benefits.

However, there has been disagreement over whether the Legislature can even consider the vaccine-related bills under the provisions of this session, which is supposed to be focused on redistricting, and House Speaker Matthew Shepherd, R-El Dorado, ruled this week that SB730 is beyond the scope of the session.

A third bill passed by the Senate, Senate Bill 732 by Sen. Blake Johnson, R-Corning, was defeated in the House. It would have prohibited a business, person or any other legal or commercial entity from coercing someone to receive a covid-19 vaccination.

Gov. Asa Hutchinson will consider HB1977 and SB739. He has expressed reservations about the bills, but he stopped short of saying whether he would sign them, veto them or let them become law without his signature.

If one of the bills becomes law, it would take effect 90 days after the session ends unless legislators get enough votes to create an emergency clause to make it go into effect immediately.

Go here to read more about the passage of the identical bills, from reporters Jeannie Roberts, Rachel Herzog and Michael Wickline, and sign up for our politics newsletter to stay on top of all things state government.