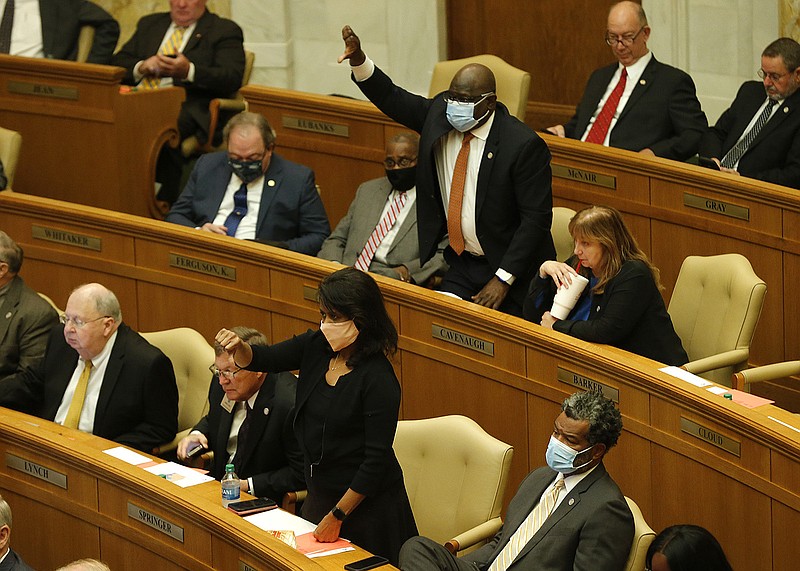 Reps. Fred Allen (top center) and Joy Springer (bottom center), both D-Little Rock, express their intent to speak against the House congressional redistricting bill Wednesday. Several lawmakers who spoke against it said it was possible to draw a map with low population deviation without splitting counties and that the plan would eliminate the possibility of Arkansas electing a Black person to Congress. More photos at arkansasonline.com/107session/. (Arkansas Democrat-Gazette/Thomas Metthe)

The Arkansas House and Senate passed redistricting bills that would divide the state's most populous county between three congressional districts on Wednesday, a week after coming back into session.

Senate Bill 743 by Sen. Jane English, R-North Little Rock, and House Bill 1982 by Rep. Nelda Speaks, R-Mountain Home, are identical bills that redraw the lines for the state's U.S. representatives based on population data from the 2020 U.S. census.

Lawmakers reconvened last week after taking an extended recess while waiting to receive census data from the federal government; Wednesday marked the 116th day of the 2021 regular legislative session.

After the bills were approved in their originating chambers, the House and Senate Committees on State Agencies and Governmental Affairs endorsed the opposite chamber's bills. Lawmakers are expected to vote on both when the chambers convene this morning, the final hurdle before the bills can be sent to the governor.

The Natural State's population grew to 3,011,524 people over the past decade, making 752,881 the ideal population for each congressperson to represent.

Proponents of SB743 and HB1982 touted how close the populations of each district would be under the bills to the ideal population, while Democratic lawmakers objected to the bills putting majority-minority areas of Pulaski County in separate congressional districts from the rest of the county.

English said she thought it was important to look at how the state has changed over the past 10 years and where the population has grown or declined.

"These maps are basically simply done on population across the state, moving some people here because we didn't have enough folks over here. Sometimes we have too many people over here, so we have to change it to over here," she said. "All of the districts meet the deviation, every one of them is on target."

She said many lawmakers in the Senate and House worked on it.

Speaks said she believed HB1982 would "stand the challenge if necessary."

"It's been scrutinized more than any bill since I've been down here," she said.

Lawmakers who spoke against the proposed map said it was possible to draw a map with low population deviation without splitting counties and that it would eliminate the possibility of Arkansas electing a Black person to Congress.

"That desire and that hope is being squashed here today by the map that you are presenting for our consideration," Sen. Linda Chesterfield, D-Little Rock, said, after pointing out that her constituents voted overwhelmingly for her colleague, Sen. Joyce Elliott, D-Little Rock, who ran unsuccessfully against the 2nd Congressional District's incumbent, U.S. Rep. French Hill, R-Ark., in 2020. Chesterfield represents southeast Pulaski County.

Elliott said lawmakers should "absolutely" take the racial makeup of different areas into account along with the other criteria they look at when redistricting.

Sen. Jason Rapert, R-Conway, took issue with Elliott's statements about race and said there was no effort to dilute the minority vote.

"We have done our very best to not have any discussion so we can focus on the parameters that we're supposed to look at," Rapert said. "People are going to get heated, people are going to make claims but there has been no effort whatsoever, senator. I would object if there were."

He said SB743 creates a better map than what Arkansas has currently, which was drawn by a Democrat-controlled legislature 10 years ago and splits five counties instead of two.

"I think the map looks a whole lot better today with what this committee has given us, it's not all crossed up and gerrymandered like it was in 2011," he said. "Could we make it perfect? No, but I'm tired of hearing some of the allegations thrown at members on all this stuff. They did the best they could and they got it down to two instead of five, so be happy."

Sen. Clarke Tucker, D-Little Rock, said separating the majority-minority parts of Pulaski County into different districts harms them in terms of congressional representation because they are isolated from the rest of the county and from the vast majority of the congressional district they will be in.

"I have no idea if litigation is going to be filed but my guess is that it will. And the fact that we're splitting Pulaski County three ways is going to be exhibit one," he said.

The Senate bill initially failed on a 16-8 vote, with 11 legislators not voting. The vote was expunged, allowing English to bring the bill back hours later for it to pass on a 23-10 vote.

The bill was first voted down amid procedural wrangling over passage of an emergency clause on a separate bill dealing with employer-mandated coronavirus vaccinations.

Rapert, who chairs the Senate Committee on State Agencies and Governmental Affairs, said it was "the time in the session where members have nothing left but procedural motions to try to obtain their policy." Asked whether SB743's initial failure was tied to the coronavirus-related bill, he said, "It's all interrelated at this point.

"We're going to have maps at the end of this at some point. We're nearing it but we still have a little ways to go," he said.

Senate President Pro Tempore Jimmy Hickey, R-Texarkana, said emotions can run high and "sometimes when you're in a session like that, what you got to do is just stop and back away from it and kind of do a little thinking."

In the House, many said the bill harms Black communities in Little Rock.

"We all know what this map is doing. Pulaski County votes Democratic and has a large Black population, particularly in the southern and eastern areas," Rep. Andrew Collins, D-Little Rock, said. "We are putting these parts of Pulaski County in different congressional districts and, in doing so, we are weakening and diluting Democrats' voice in electing a representative and we are weakening and diluting Black Arkansans' voice in electing a representative. The map is likely illegal. It's personally offensive to me and many others and it is sad."

Rep. Aaron Pilkington, R-Knoxville, said lawmakers could have made the maps "redder" but didn't.

"This map is actually bluer than the average of most districts when you look at the 2nd Congressional District. We could've actually gone way harsher if we wanted to," Pilkington said. "But I'm going to be voting for this because I'm representing my people in the River Valley who like this and like being concentrated."

Rep. David Ray, R-Maumelle, said while the map was not perfect, splitting Pulaski County was necessary. He said Jefferson County, a majority-minority county, was split 10 years ago.

"So, I think we can just tone it down on some of the performative theatrics here and the moral outrage that's been dialed up about splitting a county," Ray said. "The idea that this is, quote, 'a gerrymander' is laughable."

Ray said the issue of race is "continually injected" into the discussion and legislators are called racist.

Rep. Monte Hodges, D-Blytheville, said he was going to talk about race because "racism is a reality."

Rep. Jim Wooten, R-Beebe, said there is no better representation than a map that is within 0.05% of the ideal population and he was "sorry to see race introduced in this body."

"We're a great state and the point of race should not, in my opinion, be a factor in this. I love Black people just as much as I love white people," Wooten said. "I will do anything I can to help them in any way possible. But just because of the race being thrown in here, it's not right and it's unnecessary."

Neither bill garnered enough votes to pass an emergency clause, which requires a two-thirds majority in both chambers: 24 votes in the 35-member Senate and 67 votes in the 100-member House.

Hickey said the emergency clause was unimportant for the redistricting bills and it was put there out of an abundance of caution. Bills without an emergency clause go into effect 90 days after the end of the session.

He also said he believed the map would hold up under judicial scrutiny.

"It's been vetted, vetted around. I think we've been doing this process for even before the session," he said. "Yes, it's a different map, but I think the process has been fair."

Asked about redistricting at his weekly news conference, Gov. Asa Hutchinson said he didn't think there was anything wrong with dividing a county to achieve the right population requirements and meet constitutional standards.

Asked whether the bills passed that test, he said what he had seen so far caused him some concern. He said he hadn't looked at the demographic details for how those districts would end up, but that he had heard about some of the comments from Central Arkansas lawmakers and wanted to look more closely. 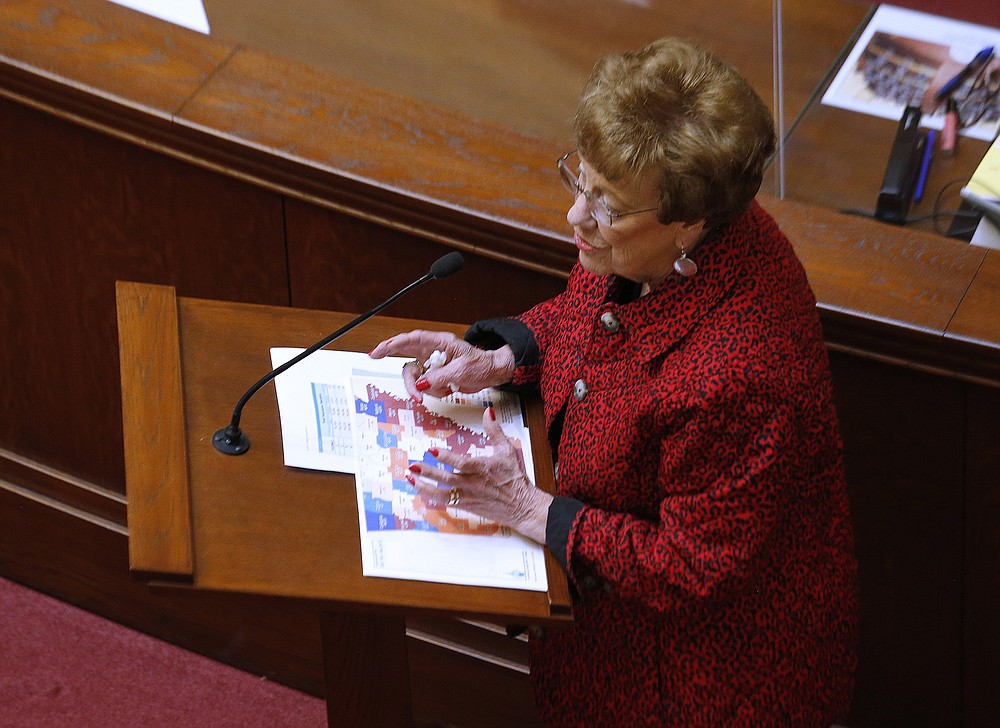 “These maps are basically simply done on population across the state, moving some people here because we didn’t have enough folks over here,” Sen. Jane English said Wednesday in presenting her redistricting bill in the Senate. “Sometimes we have too many people over here, so we have to change it to over here. All of the districts meet the deviation, every one of them is on target.” (Arkansas Democrat-Gazette/Thomas Metthe)