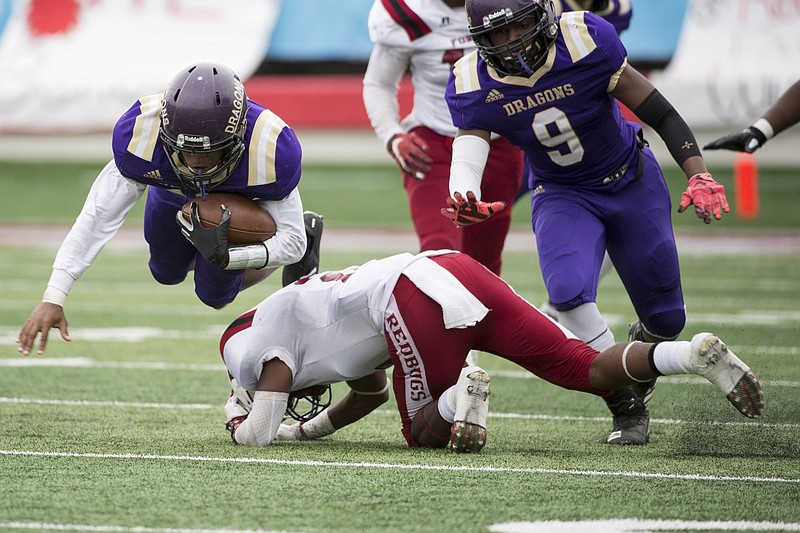 Junction City Coach Brad Smith shouldn't have to use any motivational material or tactics to get his team amped up for Friday's opponent.

The Dragons are gearing up to face two-time defending, Class 2A state champion Fordyce, and that should be more than enough to get Junction City ready.

"Of course, Fordyce is just a very, very talented team," Smith said. "They did lose a lot of guys from last season so they're not as experienced as they have been, but they're still Fordyce. They play such great defense. And on offense, they run out of about seven or eight different formations. When they find something, they stay there. That's happened in every game that we've watched.

"Now it may take them a little bit to find something that works, but when they do, that's what you're seeing, and they take off with it."

Smith would love nothing more than to see his team take off in their league opener following their bye week. But the Dragons find themselves in an unfamiliar spot going into their showdown with the Redbugs.

Junction City (2-3, 0-0 2A-8) has dropped back-to-back games for the first time since 2018. The level of competition during their two-game slide hasn't exactly been easy either. Haynesville (La.), which is regularly one of the top small-school programs in Louisiana, beat the Dragons 40-28 on Sept. 17, while Class 5A Beebe pulled away for a 49-12 victory a week later.

Smith admitted that the idle time allowed his team to make some much-needed progress.

"We got a lot of things done," he explained. "We healed some bumps and bruises. Unfortunately, we still have some of those bumps and bruises, but we're not as unhealthy as we were, and hopefully, that'll help us going forward because we've been inconsistent.

One thing that hasn't changed is the production the Dragons have been getting out of Jamal Johnson. The senior, who finished with more that 1,500 yards of offense and 30 touchdowns a season ago, has nearly 600 yards from scrimmage and 7 scores this year. Junction City has also gotten solid play from sophomore Jordavion Williams, who had a combined 237 yards and two touchdowns in the two losses.

However, Smith believes Fordyce (3-2, 0-0) could bring out the best from his group.

The Redbugs have been up and down as well, but that was something Coach Tim Rodgers expected, especially after losing 12 seniors from last year. Fordyce snapped a rare two-game losing streak by beating Carlisle 28-12 on Oct. 1 and will be aiming to extend its winning streak over the Dragons to three games.

"Their best player hasn't played since Week 1," Smith said in reference to the Redbugs quarterback Trey Merritt, who's been nursing an ankle injury. "But for us to win, we're going to have to be consistent. We talk about playing play-to-play because we have a tendency, due to our inexperience, to really get happy when something good happens and really get sad when something bad happens.

"We've got to learn there are two speeds -- wide open and stop at the whistle. When that whistle does blow, it's short-term memory time."

After watching his team battle in each of the past six weeks, Melbourne Coach Casey Moreland is happy that they're finally getting a break.

"Man, we've been going at it since Week Zero," he said. "We've been using this off week to get healthy and work on ourselves a little bit. And to be honest, we're glad about it."

"That's two games by a combination of five points," he said. "Cave City was better than what we expected, and I had a hard time getting the kids to get up for it. Then against Newport, we had fourth and 15 on their end of the field with three minutes left, and we're about to get the ball back. But we end up face-masking their quarterback when we went to sack him.

"But still, I'm proud of the work that the kids have done because this has been a big change for them."

Moreland is in his first season with the Bearkatz after taking over for Kevin McCarn, who led the team to the postseason in seven of his eight years. He noted that it's been a learning curve for everyone involved, but he also said it wasn't totally unexpected.

"Just understanding my offense, understanding my defense, and understanding what I'm expecting," said Moreland, who was an assistant coach at Warren prior to taking over at Melbourne. "Not only that, but we've got a brand-new coaching staff. I only knew one guy that I hired on the staff. So new coaches learning to work together, and the kids learning different terminology.

"But with all that being said, we're doing a pretty good job of gelling together and finding ways to scratch out wins. Our best football is ahead of us."

Last week, Poyen did the only thing it knew how to do in order to snap a two-game losing streak.

The Indians went out and won.

"It was a big game for us, no question," said Poyen Coach Vick Barrett, whose team outlasted Dierks 30-28 behind a four-touchdown effort from quarterback Colton Lowe. "We'd played a tough nonconference schedule, and we needed a win. The place for us to try to go find one was down in Dierks, and it's tough to get a win down there.

"To come out of that one was really big, and it was against a quality football team. It wouldn't surprise me one bit if Dierks goes on to win their conference."

A league title is something Poyen (3-2, 0-0 2A-5) is shooting for as well, but that quest won't begin until next week. In the meantime, it's another out-of-conference foe for the Indians, who'll face Cross County on Friday.

Poyen was originally supposed to play Lafayette County, but the Cougars are experiencing low numbers and injuries. So Barrett was able to find a replacement game for his team against another noteworthy opponent.

"I know the coach pretty well down at Lafayette County," Barrett explained. "So he'll get a chance to rest his kids while getting some of them healthy before they start conference. We went out and picked up Cross County, which will be a tough one. But that's what we need to see right now."

Barrett likes what he's seen so far from his guys. Lowe has accumulated more than 1,000 yards of offense and 13 touchdowns, but it's Poyen's play up front that's stolen the show.

In the victory over Dierks, the Indians ran for nearly 400 yards, with Lowe rushing for 225.

"That kind of yardage is not all on the backs," Barrett explained. "That's on those big guys doing their jobs and creating holes. They've been clutch for us and getting better every week. It's the same thing on defense, too.

"That defensive line and the linebackers have been exceptional. Those guys don't always get the glory or the highlights, but that's where we're hanging our hat. We're going to continue to do it."

Covid-19 has forced a pair of teams from northeast Arkansas to get off to rough starts in conference play.

Marked Tree (2-3, 0-2 2A-3) canceled its league opener against Earle a week ago and had to postpone Friday's game against Cross County. The cancellation resulted in a forfeiture, which saddled Marked Tree with a loss due to Arkansas Activities Association rules. Luckily for the Indians, they were able to avoid another defeat by rescheduling their date with Cross County for Nov. 4.