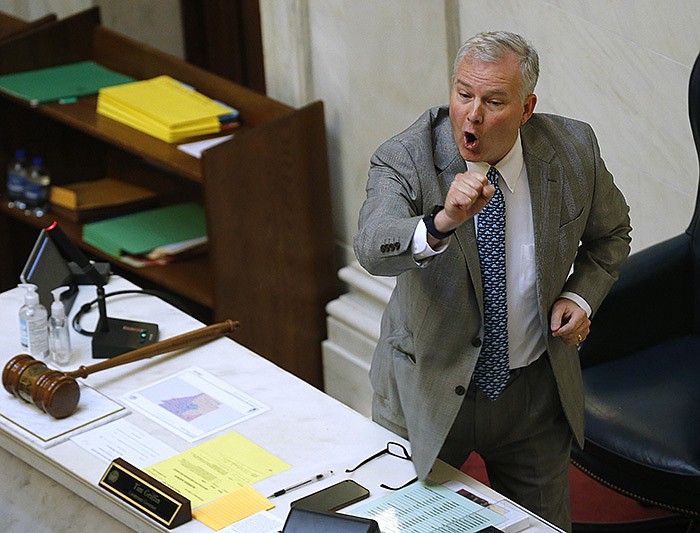 Lt. Gov. Tim Griffin talks about voting rules Wednesday during Senate debate over a bill to provide employee exemptions from covid-19 vaccination mandates. The bill was approved but lacked the votes for an emergency clause. (Arkansas Democrat-Gazette/Thomas Metthe)

Identical bills aimed at exempting employees from federal or employer covid-19 vaccination mandates cleared the Arkansas Senate and House of Representatives on Wednesday.

The measures are a response to President Joe Biden's announcement last month that he would require employers with more than 100 workers to mandate vaccinations for employees or test them for the virus weekly. That requirement will be enacted through a rule from the Occupational Safety and Health Administration.

The Biden administration also announced that it would expand coronavirus vaccination requirements to cover staffers within all Medicare- and Medicaid-certified facilities. In the United States, about 400 million doses of vaccine have been administered. In Arkansas, about 3 million doses have been given.

On Wednesday, the Senate voted 22-12 to approve one of the two identical bills -- House Bill 1977 by Rep. Joshua Bryant, R-Rogers. But it fell two votes short of the 24 required to approve the emergency clause.

For a bill to take effect immediately, it must have an emergency clause that is approved by two-thirds of the Legislature -- 24 votes in the Senate and 67 votes in the 100-seat House. Otherwise, the bills take effect 90 days after the session ends.

Gov. Asa Hutchinson on Wednesday expressed his reservations about the bills, but he stopped short of saying whether he would sign them, veto them or let them become law without his signature. He said he has additional work to do before he makes up his mind. It takes a simple-majority vote in the House and Senate to overturn a veto of a bill.

Hammer, who is a co-sponsor of Bryant's bill, told senators that the federal government "created this mess in the first place."

"There are Arkansans who know they are about to be terminated from their job if we don't create a common sense path forward," he said. "We need an umbrella. We need something to protect us from the rain of insanity that is falling out of Washington on us. This umbrella can give them that protection."

"Like it or not, this is a mandate," he said, referring to Bryant's bill. "Mandates are counterproductive and don't accomplish what we think they're going to accomplish."

On the other side of the state Capitol, the House voted 61-25 to approve Senate Bill 739 by Hammer, which is identical to Bryant's HB1977.

"This is our chance to ensure the governor has at least one of these bills on the table," Bryant said.

Rep. Gayla Hendren McKenzie, R-Gravette, who voted for HB1977 on Tuesday, said she was against SB739 because she only had "30 seconds" to think about it. She asked for it to be held until today.

"Is there any reason why we must vote on this now?" McKenzie said. "There's no reason we can't give it some thought and let our constituents weigh in because we're going to have to be back here one way or the other tomorrow."

House Speaker Matthew Shepherd, R-El Dorado, said the bill was being voted on by the House's members and that if they didn't want to hear it, "they could've voted it down."

Rep. Delia Haak, R-Gentry, urged her colleagues to vote for the bill.

HB1977 and SB739 would require employers that mandate vaccinations to provide an exemption process for workers, including requiring them to produce a negative antigen test once a week or proof of immunity for the virus that causes covid-19 or its variants, including the presence of antibodies, T cell response or proof of a positive covid-19 test from a licensed health care provider two times a year.

If an employee complies with the requirements of the exemption process related to covid-19 under the bills, "the employee shall not be terminated for mandates related to coronavirus 2019 (COVID-19)."

If enacted into law, then the bills "shall expire on July 31, 2023, unless extended by the General Assembly."

Department of Commerce spokeswoman Alisha Curtis said the Division of Workforce Services cannot advise individuals before they resign as to whether they have grounds to voluntarily quit and receive unemployment benefits.

"A determination of unemployment benefits is fact-intensive and made only after a claim has been filed with all of the relevant information provided by the claimant and the employer," she said Tuesday in a written statement.

In general, claimants normally will not be entitled to unemployment benefits when they stop working because of a vaccination requirement unless their circumstances fit an exception already recognized by statute as interpreted by Arkansas courts, Curtis said.

Shepherd, the House speaker, ruled Monday night that Senate Bill 730 by Sen. Trent Garner, R-El Dorado, was not germane for consideration in the extended regular session. SB730 would change state law so that people wouldn't be disqualified from receiving unemployment benefits if they were terminated for refusing to be vaccinated against covid-19.

House Concurrent Resolution 1015, which called for an extended recess of the regular session while lawmakers awaited the delivery of population data from last year's U.S. census, allows the House speaker and the Senate president pro tempore to reconvene the General Assembly at any time to consider overriding vetoes; correct errors and oversights; complete redistricting; and consider legislation related to the pandemic and covid-19 relief funds. There has been disagreement among lawmakers over whether that language allows them to consider bills that deal with the pandemic broadly.

The Senate Public Health, Welfare and Labor Committee on Wednesday morning advanced HB1977 to the full Senate after three Hutchinson administration officials expressed their concerns about the bill.

Jim Hudson, director of strategy and operations at the state Department of Commerce, said department officials are hearing concerns about the bill from some businesses, particularly from small businesses that have chosen not to require their employees to be vaccinated for covid-19.

There is "a little bit of confusion" among businesses about implementing the federal mandate as well as the provisions of this bill, he said, so he asked for lawmakers to show "kindness to our business community" to provide "a little bit more time" for businesses such as restaurants and hospitals to study the bill and understand how to implement it, he said.

But Ray Lehman of Hot Springs Village, a retired salesman, said he supports the bill and that the employees who refuse their employers' request to be vaccinated against covid-19 should be given a little bit more time before they are fired.

He said he fled from Nevada to Arkansas and that he wants to compliment what he called "the most politically conservative Legislature I have ever witnessed in my life."

Alan McVey, chief of staff for the state Department of Finance and Administration, said the cost of testing employees is an eligible use of federal American Rescue Plan Act funds, but the department officials are concerned about the potential cost of the testing outstripping the availability of those funds.

He said the state could be on the hook under the bill for the cost of testing potentially 25,000 employees once a week, adding that the cost of the tests is estimated at $100 apiece. Afterward, finance department spokesman Scott Hardin said "our estimate is $237.5 million" based on 95 weeks of testing at a weekly cost of $2.5 million.

Hammer has suggested the department's projections are overblown.

Matt Gilmore, public health programs policy coordinator for the state Department of Health, said department officials are concerned with the bill's provisions relating to the number of tests required each week and the process for testing for immunity as well as potential issues for hospitals and other health care facilities.

Jodiane Tritt, executive vice president of the Arkansas Hospital Association, said association officials are worried the bill's provisions might not conform with federal rules and might put the hospitals in an untenable situation of choosing whether to follow federal rules or state law.

At his weekly news conference, Hutchinson said, "I have expressed reservations about the bill because I don't believe in a federal mandate on vaccination, but I also don't believe in state mandates as well on employers and defining an employer and employee relationship and what the employers can and cannot do in terms of the public health.

"I worry about the burden that it places on employers," the Republican governor said. "Obviously, they are trying to address some assistance to the workers, but I don't want to overly interfere in creating mandates for business."

Hutchinson said the test to him is what will be the impact if the emergency clause is not approved by the Legislature.

He said he intends to talk to the U.S. Department of Labor, which will be issuing its own guidelines based on Biden's vaccination mandate.

"I want to see how that's going to fit and whether the employers are going to be caught in a bind between the federal requirements and what the state law may require, so I've got to some work to do ... just to learn more as to whether that bill is manageable and whether it places a new burden on the businesses that would be unacceptable." 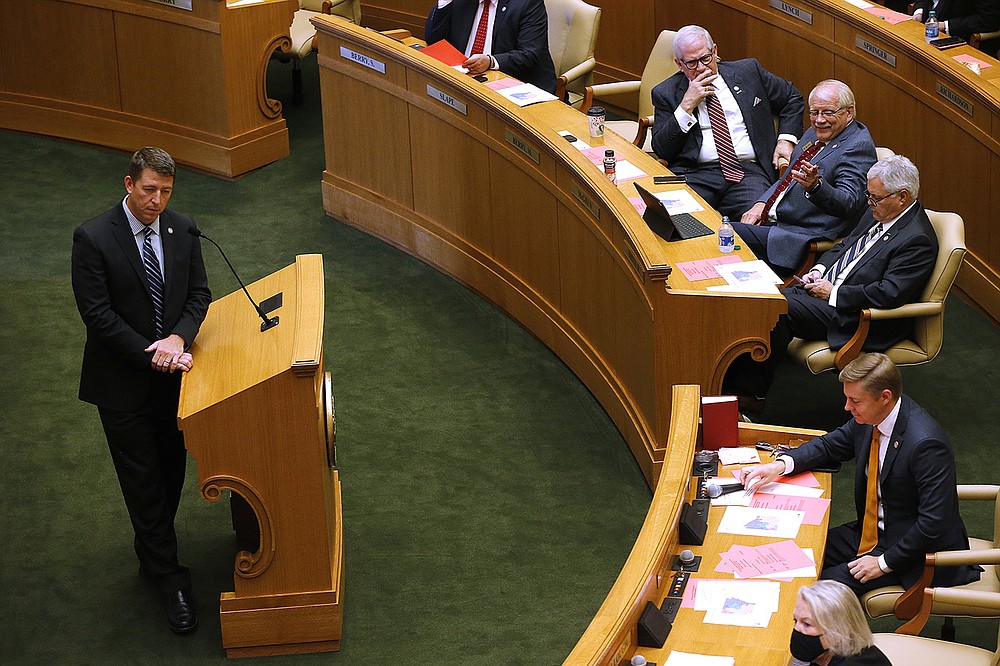 “This is our chance to ensure the governor has at least one of these bills on the table,” Rep. Joshua Bryant said Wednesday of his bill to provide employee exemptions from federal and employer covid-19 mandates. (Arkansas Democrat-Gazette/Thomas Metthe)