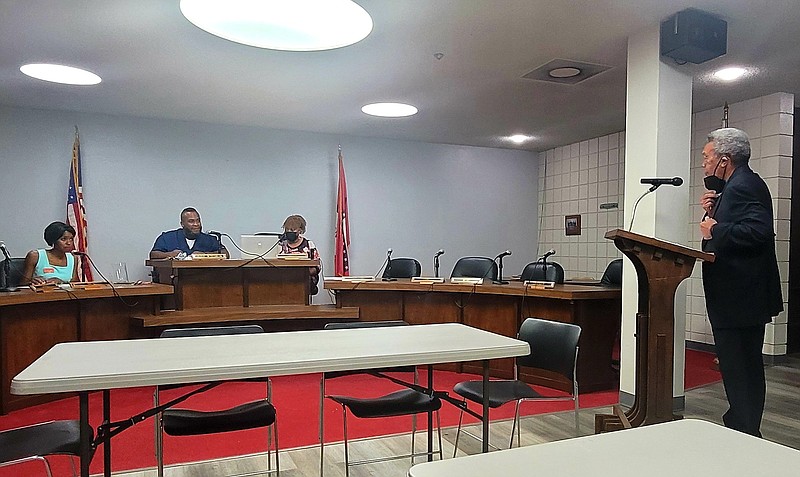 Animal Control Director Marcus Graydon said the department had captured 96 animals and euthanized seven since Sept. 1. Four animals were adopted from the shelter and 97 were recused out to their forever homes in the northern states.

Graydon reported that he was in need of two animal control officers.

Fire and Emergency Services Department Chief Shauwn Howell's report for September showed a total of 463 incident responses. Out of those, 256 were emergency medical responses, 57 were false alarms, 29 were vehicle accidents with injuries, 16 were brush fires, 15 were structure fires, 14 were alarm systems, six were vehicle fires and 70 were listed as other.

Five of the structure fires occurred in the Fourth Ward, with three more in the Second Ward, two in the Third Ward and one in the First Ward. Four structure fires were classified as arson. All incident numbers in Howell's report had increased from the previous month except for emergency medical responses and others.

Howell reported eight new hires joining the Pine Bluff Fire Department but still had 10 vacancies. On the days when staffing is short, Howell said, he has to make scheduling adjustments including downing stations with two trucks to one.

Pine Bluff recorded only one homicide during September, Interim Police Chief Lloyd Franklin Sr. reported. It is a significant decrease from previous months (six in June and three each in July and August).

"I wouldn't classify it as a homicide but it was," Franklin said. The incident in question, he added, was self-defense during a burglary.

"It's because a gentleman broke into a man's home and the man was able to kill him before he was able to do harm to him."

Franklin gave high praise to "Blue Rain," an initiative he implemented last month to combat crime in Pine Bluff. According to Franklin, there were 220 arrests and citations in September.

Franklin said the young police officers are carrying the load with a good spirit. He also said the morale in the police department has improved significantly.

Franklin did report that four new recruits had graduated from police academy but one turned in a resignation to go to another county's sheriff's office.

Though unfortunate, Franklin said, the PBPD hired an experienced officer from the same department at the same time.

The PBPD is still in need of patrol officers. With violent crimes at the forefront of their operations, Public Safety Committee member Joni Alexander asked Franklin if traffic cameras that automatically generated a ticket for running a red light would help.

Franklin said he had not considered that option but answered that it would. Franklin is currently in the process of securing breathalyzer tests and portable digital speed signs.

Public safety Chairman Glen Brown Jr. asked there be a focused patrol on Main Street, University Drive, 28th Avenue and Olive Street during the University of Arkansas at Pine Bluff's homecoming weekend. He also suggested bike patrol be an option to allow easier maneuvering through traffic.

Brown indicated he was impressed overall with the initiatives of the PBPD.

"Whatever is going on in the police department as far as patrolling the city is working because all I hear now is, 'Every time I go out I see lights flashing,'" he said. "However you are operating, keep up the good work. Over time we'll probably see fewer lights again because hopefully at that point it won't be as many violations out there. That will be a good thing."