Despite 30% efficacy, experts say vaccine could provide major relief to Africa by MARIA CHENG THE ASSOCIATED PRESS | October 7, 2021 at 3:49 a.m. 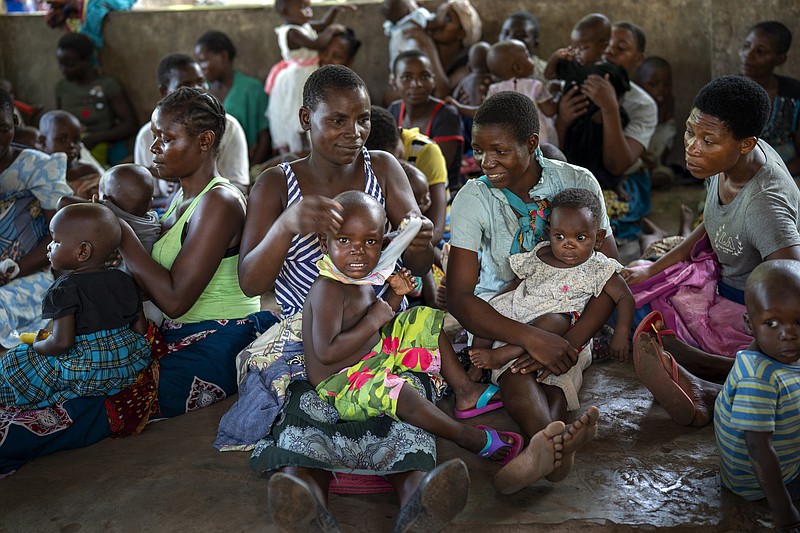 FILE - In this Wednesday, Dec. 11, 2019 file photo, residents of the Malawi village of Tomali wait to have their young children become test subjects for the world's first vaccine against malaria in a pilot program. The world&#x2019;s first malaria vaccine should be given to children across Africa, the World Health Organization recommended Wednesday Oct. 6, 2021, a move that officials hope will spur stalled efforts to curb the spread of the parasitic disease. (AP Photo/Jerome Delay, file)

LONDON -- The World Health Organization endorsed the world's first malaria vaccine Wednesday and said it should be given to children across Africa in the hope that it will spur stalled efforts to curb the spread of the parasitic disease.

WHO Director-General Tedros Adhanom Ghebreyesus called it "a historic moment" after a meeting in which two of the U.N. health agency's expert advisory groups recommended the step.

"Today's recommendation offers a glimmer of hope for the continent, which shoulders the heaviest burden of the disease. And we expect many more African children to be protected from malaria and grow into healthy adults," said Dr. Matshidiso Moeti, WHO's Africa director.

WHO said its decision was based largely on results from ongoing research in Ghana, Kenya and Malawi that tracked more than 800,000 children who have received the vaccine since 2019.

The vaccine, known as Mosquirix, was developed by GlaxoSmithKline in 1987. While it's the first to be authorized, it does face challenges: The vaccine is only about 30% effective, it requires up to four doses and its protection fades after several months.

Still, scientists say the vaccine could have a major impact against malaria in Africa, home to most of the world's more than 200 million cases and 400,000 deaths per year,

"This is a huge step forward," said Julian Rayner, director of the Cambridge Institute for Medical Research, who was not part of the WHO decision. "It's an imperfect vaccine, but it will still stop hundreds of thousands of children from dying."

[Video not showing up above? Click here to watch » arkansasonline.com/107malaria/]

Rayner said the vaccine's impact on the spread of the mosquito-borne disease was still unclear, but pointed to those developed for the coronavirus as an encouraging example.

"The last two years have given us a very nuanced understanding of how important vaccines are in saving lives and reducing hospitalizations, even if they don't directly reduce transmission," he said.

Dr. Alejandro Cravioto, head of the WHO vaccine group that made the recommendation, said designing a shot against malaria was particularly difficult because it is a parasitic disease spread by mosquitoes.

"We're confronted with extraordinarily complex organisms," he said. "We are not yet in reach of a highly efficacious vaccine, but what we have now is a vaccine that can be deployed and that is safe."

WHO said side effects were rare, but sometimes included a fever that could result in temporary convulsions.

Sian Clarke, co-director of the Malaria Centre at the London School of Hygiene and Tropical Medicine, said the vaccine would be a useful addition to other tools against the disease that might have exhausted their utility after decades of use, like bed nets and insecticides.

"In some countries where it gets really hot, children just sleep outside, so they can't be protected by a bed net," Clarke said. "So obviously if they've been vaccinated, they will still be protected."

In recent years, little significant progress has been made against malaria, Clarke said.

"If we're going to decrease the disease burden now, we need something else," she explained.

Azra Ghani, chair of infectious diseases at Imperial College London, said she and colleagues estimate that giving the malaria vaccine to children in Africa might result in a 30% reduction overall, with up to 8 million fewer cases and as many as 40,000 fewer deaths per year.

"For people not living in malaria countries, a 30% reduction might not sound like much. But for the people living in those areas, malaria is one of their top concerns," Ghani said. "A 30% reduction will save a lot of lives and will save mothers [from] bringing in their children to health centers and swamping the health system."

The WHO guidance would hopefully be a "first step" to making better malaria vaccines, she said. Efforts to produce a second-generation malaria vaccine might be given a boost by the messenger RNA technology used to make two of the most successful covid-19 vaccines, those from Pfizer-BioNTech and Moderna, she added.

"We've seen much higher antibody levels from the mRNA vaccines, and they can also be adapted very quickly," Ghani said, noting that BioNTech recently said it would begin researching a possible malaria shot. "It's impossible to say how that may affect a malaria vaccine, but we definitely need new options to fight it." 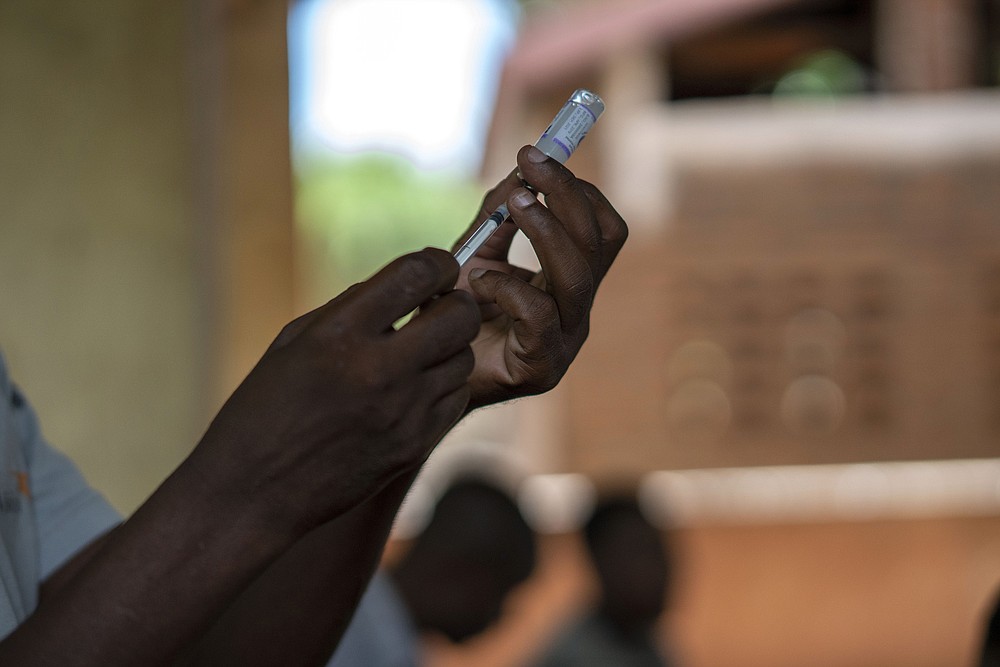 FILE - In this file photo taken Wednesday, Dec. 11, 2019, health officials prepare to vaccine residents of the Malawi village of Tomali, where young children become test subjects for the world's first vaccine against malaria. The World Health Organization recommended that the world&#x2019;s first malaria vaccine be given to children across Africa, in a move officials hope will spur the stalled progress against efforts to curb the spread of the parasitic disease. (AP Photo/Jerome Delay, File) 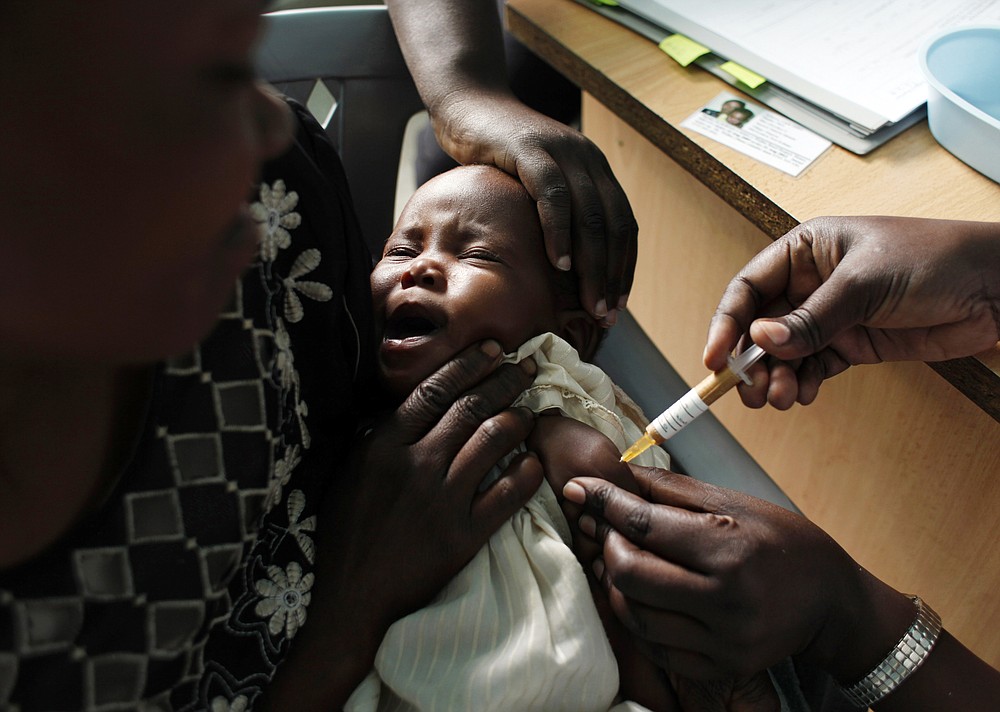 FILE - In this Oct. 30, 2009 file photo, a mother holds her baby receiving a new malaria vaccine as part of a trial at the Walter Reed Project Research Center in Kombewa in Western Kenya. The world&#x2019;s first malaria vaccine should be given to children across Africa, the World Health Organization recommended Wednesday Oct. 6, 2021, a move that officials hope will spur stalled efforts to curb the spread of the parasitic disease. (AP Photo/Karel Prinsloo, File) 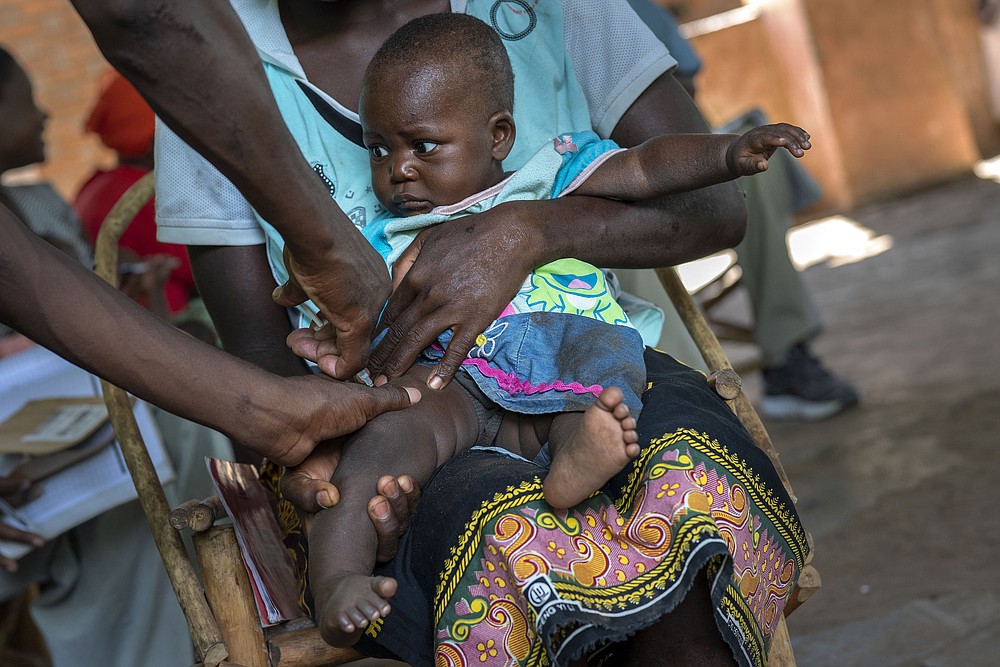 FILE - In this Wednesday, Dec. 11, 2019 file photo, a baby from the Malawi village of Tomali is injected with the world's first vaccine against malaria in a pilot program. The world&#x2019;s first malaria vaccine should be given to children across Africa, the World Health Organization recommended Wednesday Oct. 6, 2021, a move that officials hope will spur stalled efforts to curb the spread of the parasitic disease. (AP Photo/Jerome Delay, file)