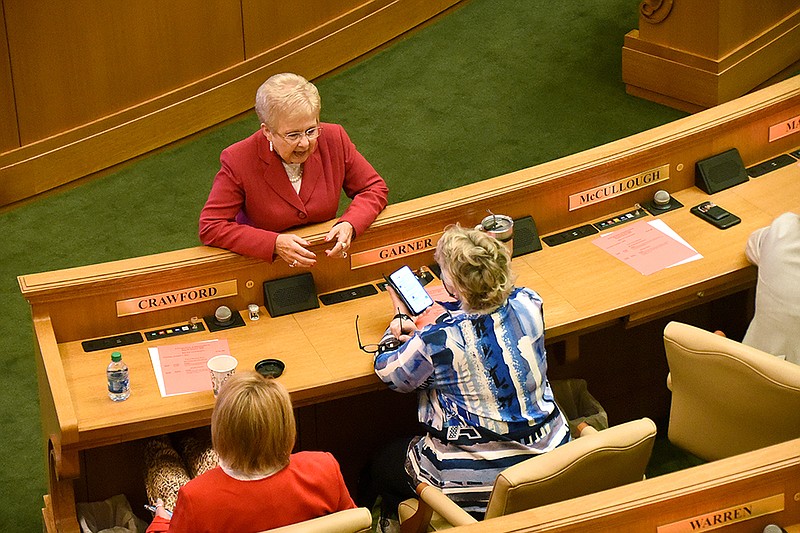 Rep. Nelda Speaks (top) talks with Rep. Cindy Crawford (left), R-Fort Smith, and Rep. Denise Garner, D-Fayetteville, during a recess Thursday. “I think this is a good map, I really do, and I think it’s a fair map,” Speaks said after the House approved her bill. (Arkansas Democrat-Gazette/Staci Vandagriff)

Arkansas lawmakers on Thursday voted to send the governor identical congressional redistricting bills that would trisect the state's most populous county, despite objections that the plans would remove thousands of Black people in Pulaski County from the 2nd District.

The General Assembly reconvened last week, after taking an extended recess over the summer, to tackle congressional redistricting upon receiving population data from the 2020 U.S. census. Each decade, the Legislature redraws the lines for the state's U.S. representatives based on that data. Thursday marked the 117th day of the 2021 regular legislative session.

Senate Bill 743 by Sen. Jane English, R-North Little Rock, and House Bill 1982 by Rep. Nelda Speaks, R-Mountain Home, are the first redistricting plans to be passed by a Republican-controlled Arkansas Legislature since the Reconstruction era. The GOP gained control of both chambers for the first time in the 2012 election.

Proponents of the bills tout that they keep each district close to the ideal population. Arkansas' population grew to 3,011,524 according to the latest census numbers, so lawmakers said they aimed to keep the number of constituents for each U.S. representative as close to 752,881 as possible.

"I think this is a good map, I really do, and I think it's a fair map," Speaks said after the House vote. "We're only to meet every 10 years for one thing and that was to get our populations as close as we possibly could and that's all, and that's exactly what this map does."

Speaks and other Republican lawmakers said splitting the state's largest county was done to balance out the populations of the four districts. But Democratic lawmakers and voting-rights advocates have objected, saying the way the bill splits Pulaski County, which contains the state capital of Little Rock, disenfranchises communities of color by putting majority-minority areas in different congressional districts from the rest of the county.

According to U.S. census data applied to the bills' specifications, 21,000 Black people would be shifted out of the 2nd Congressional District, where the total Black population would drop from 174,467 to 153,387.

The bills' sponsors said they did not take race into account when creating the maps.

Love said those parts of Little Rock don't share common interests with the 4th Congressional District and that the capital city was left out of lawmakers' discussions on keeping like communities together when redistricting.

A southeast section of North Little Rock and Pulaski County would go to the 1st Congressional District, which covers the eastern part of the state.

Sebastian is one of five counties currently split by the congressional map that was drawn in 2011; the others are Crawford, Jefferson, Newton and Searcy counties. Those counties are now whole in SB743 and HB1982.

Asked about the bills Wednesday, Republican Gov. Asa Hutchinson said he didn't think there was anything wrong with dividing a county to achieve the right population requirements and constitutional standards, but urged lawmakers to keep in mind that they did not want to dilute minority representation or influence in congressional races.

Hutchinson said he had not looked at the demographic details for how the new districts would end up in terms of racial representation, but that he had heard about some of the comments from Central Arkansas lawmakers and wanted to look more closely.

The House passed SB743 in a 53-35 vote Thursday, two votes over the 51-member majority needed to pass a bill in the lower chamber. The Senate passed HB1982 with a 21-12 vote. The bills had bipartisan opposition in both chambers.

[STATE DISTRICTS: Information about race in Arkansas not appearing above? Click here » arkansasonline.com/2021numbers/]

"It's the strongest case that one could have to file a lawsuit. I think it will be very hard to defend. Certainly a lot of statements were made down here [by] the proponents of it. I think that those words that they said will come back in a lawsuit and it will be hard to explain them."

Ingram said both Democrats and Republicans had proposed maps that wouldn't have cut up any county.

Pulaski County is a metropolitan statistical area that is important to keep together, he said.

"I think there were better, more equitable plans out there," Ingram said.

Sen. Trent Garner, R-El Dorado, said any redistricting bill passed in any state will be challenged in court because of the contentious way that redistricting is done.

Pulaski County is the most populous county and is a natural dividing point, he said.

"The people who made the argument that you could do it by not splitting other counties didn't take into the reality that some of that splitting put people into a district that would disenfranchise them, that would have created uneven and unnatural districts, and so Pulaski County became the one that was the most natural way to break it up, where you get the population right, you have the center of the state," Garner said in an interview.

"I think it survives a court challenge because it wasn't done on racial grounds. It was done on geographical and population grounds, which was some of our consideration as well," he said.

Garner said he doesn't believe an anti-Little Rock and Pulaski County sentiment from the people in the state's rural areas contributed to the Legislature breaking up Pulaski County into three congressional districts.

"I think that a lot of those rural voters who felt like they were disenfranchised 10 years ago because their counties were split or [there were decisions made] that were outside of what they wanted ... they feel like this is a fairer map because it makes more natural sense to split up Pulaski County than the other counties," he said. "This wasn't a rural versus urban thing. This was where we can get the people that best geographically make sense and Pulaski County was the natural choice."

"I am deeply concerned about the gerrymandering along racial lines happening in our community, which was designed to dilute the voices of the residents of Little Rock," Scott said.

He said the plan separates the predominantly Black and Hispanic communities south of Interstate 30 from the rest of the city.

"It is essential that we respect communities of interest in districting, and there is no more fundamental community of interest than a city like Little Rock. Additionally, it is illogical to split Arkansas' capital city into two congressional districts. I am hopeful our state's judicial system will correct this flawed attempt at redrawing the boundaries," Scott said. 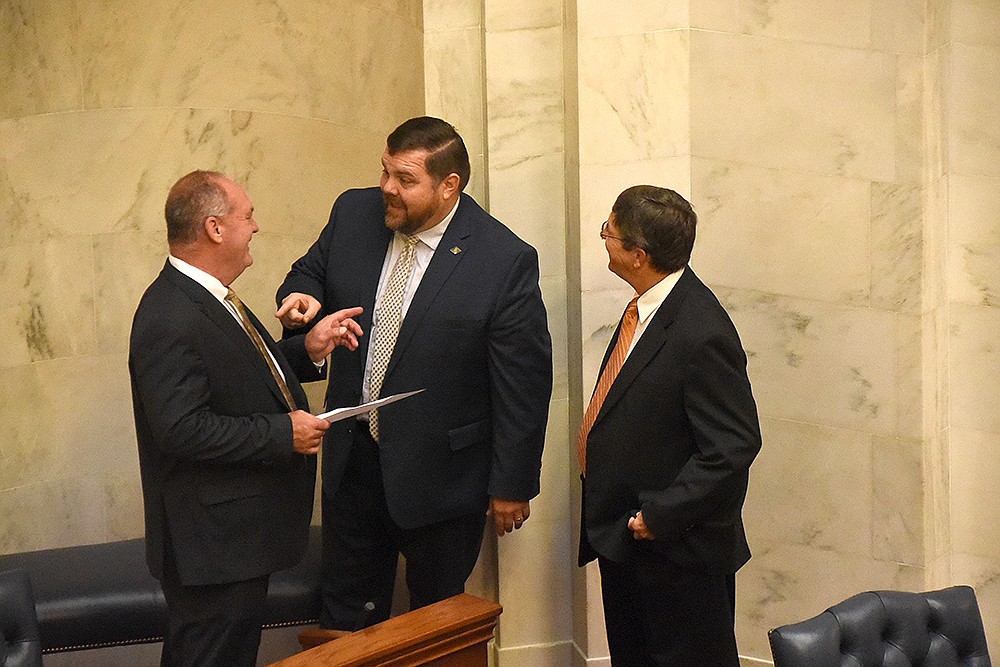