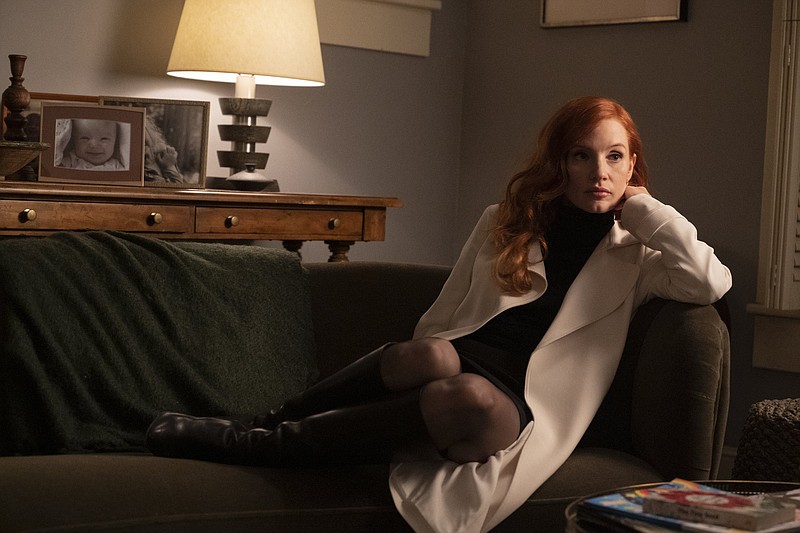 In the HBO series “Scenes From a Marriage,” Jessica Chastain plays the mercurial Mira, a woman dealing with a cascade of emotions as her marriage falls apart.

Actor/producer Jessica Chastain made her first trip to Little Rock on Saturday to do a little sight-seeing, meet some aspiring young filmmakers and -- oh yeah -- screen her new film, "The Eyes of Tammy Faye," in which she plays the title character, fallen televangelist Tammy Faye Bakker.

The screening was part of the Arkansas Cinema Society's annual Filmland event, and featured a Q&A with Chastain by director and cinema society co-founder Jeff Nichols.

Chastain and the director are old pals -- she co-starred with Michael Shannon in Nichols' 2011 thriller "Take Shelter" -- and Nichols showed her some of the sights around Little Rock before getting to Filmland business that evening.

"We went to his old high school [Little Rock Central] and [Heights Tacos and Tamales], where I over-ate because it was so good," Chastain says in a room at the Ron Robinson Theater, where Filmland was moved Saturday from MacArthur Park because of the weather. "We went to the house where Jeff grew up. I've had a really fun time."

Chastain, whose films include "Interstellar," "Zero Dark Thirty" and "Molly's Game," also had a quick visit with participants in the cinema society's Filmmaking Lab for Teen Girls. Their short film, "Drop It," premiered prior to the showing of "The Eyes of Tammy Faye."

In this interview, which has been edited for clarity and space, the two-time Academy Award nominee talks about Bakker's humanity, the challenges of portraying people from real life and her work on the new HBO series "Scenes From a Marriage."

For those who were around in her heyday, Tammy Faye Bakker had a public image that is sort of seared into our minds. What was your impression of her before you got involved with this film?

It was what I was fed by the media -- that she was a joke and a clown and a thief. I believed that she manipulated people, that she was obscene and vulgar because of all her makeup. It was all of these things I was taught as a child looking at tabloids or watching sketch comedy shows.

It wasn't until 2012 that I saw the documentary, [also called "The Eyes Of Tammy Faye" from 2000] that I actually saw the true story of who she was and how compassionate and loving and rebellious she was. I really wanted to tell the true story of her. I felt like we'd done an injustice to her and I wanted to right that.

You not only star in the movie, but you're a producer as well. How important was that role to help get this story told in the way you wanted?

It was very important. I got to talk about what kind of stories we were going to tell. Most people expected it to be satire, or cynical, the version where we're Hollywood people making fun of these televangelists, making fun of Tammy Faye or religion. I think that's what everyone expected. I wanted to stay away from salacious gossip and trauma. That was exciting to me, to have input in the story. I think this is a braver choice, to make a film in a cynical society that isn't cynical.

It's been pointed out that this movie is another re-examination of women like Tonya Harding and Monica Lewinsky, who were sort of relegated to punchline status in pop culture but who we are now maybe seeing as more developed and complex people.

Absolutely, although I will say that I got the rights to this in 2012, so it was long before a lot of [those other projects] were made, but I think it shows how the media treats women unfairly.

Tammy Faye was never tried or convicted of anything, yet the media vilified her and people were talking about how much mascara she was wearing rather than about the incredible things she was doing. In 1985 she brought on Steve Peters, an openly gay minister with AIDS, to her show. For her to do that in a time when evangelical Christians were turning their backs on the LGBTQ community and the Reagan administration isn't even talking about the AIDS epidemic, it was radical.

OK. You mentioned the makeup. You spent a lot of time being made-up for this role, and prosthetics were also involved. Did that make it easier or harder to connect with her?

It was harder, but it made the acting easier. When I first put it on I panicked because you don't feel air on your skin. She was so sensitive and exposed and vulnerable, I wondered how I was going to act and be sensitive when I feel like there's this barrier between me and others. The only thing visible is my eyes. I saw the energy it takes to push through that with my voice and my eyes and my gestures. That perhaps created a lot of energy in me to match Tammy because her energy was pretty crazy.

And I realized that I could use the time in the makeup chair as like a runway before taking off. So for four hours a day I listened to her voice, I re-watched her interviews. I used that time to prep.

You're playing another real-life icon, Tammy Wynette, in the forthcoming series "George and Tammy" about husband-and-wife country music legends George Jones and Tammy Wynette. What are the challenges to playing these people so many of us already know as opposed to a fictional character?

With Tammy Faye, in our film we depict things that are on YouTube right now, like the Steve Peters interview; you can watch our movie then go on YouTube and watch it in its entirety, or see her singing 'The Sun Will Shine Again.' That's so stressful because it's like someone checking your homework.

You also star as Mira in the remake of Ingmar Bergman's "Scenes From a Marriage" on HBO. What's it like working on a series, where there is more time to tell a story, as opposed to a feature film?

It's complicated because that's the only time I've ever done a miniseries and we filmed it during the pandemic. It was incredibly intense and we were all in a pod together.

Because I came in later in the game, I wasn't necessarily thinking about the story. I was thinking more in terms of Mira's journey. The great thing about working with [co-star Oscar Isaac] because we've been friends for so long, it felt like we weren't playing two different characters, it felt like we were playing two people as one character. It feels like the lead character is marriage, so it was a partnership unlike anything I'd ever experienced in that aspect.